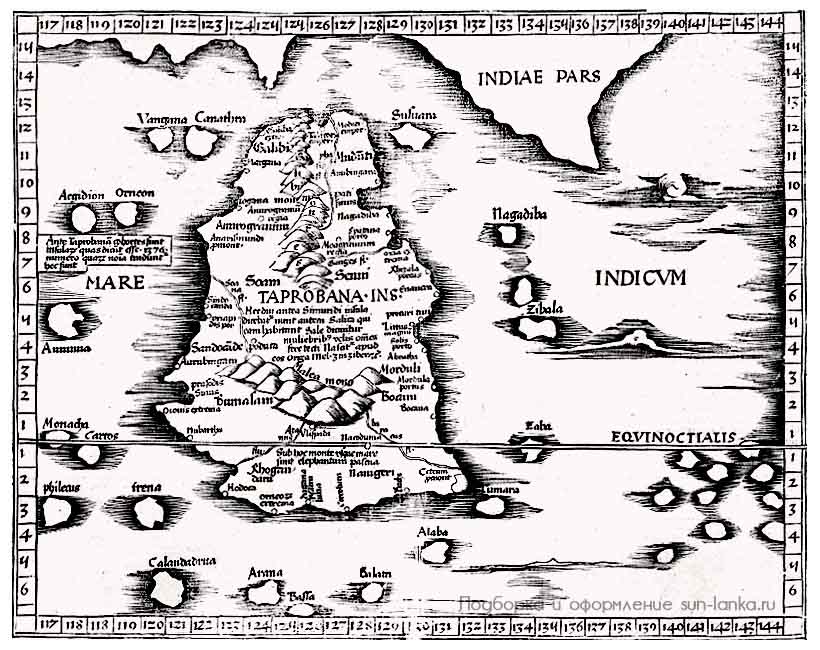 On the medieval maps of Fra Mauro and Piri Reis near Ceylon (Sri Lanka), located at the southern tip of Hindustan, there is another large island called Taproban. This land is several times larger than Sri Lanka. At the same time today in the ocean there is no island that could be taken for the mysterious Taprobanu.

Taproban – the ancient name of the island of Ceylon,Meeting with classical geographers and historians.

The existence of a large mass of land lying to the south of India was also known by ancient authors. Thus, Pomponius Mela writes that it is not known exactly whether it is an island or the “beginning of another world”. Pliny reports that in the Taproban, shadows are cast to the south, and the sun is moving in the opposite direction. So, the mysterious land was in the southern hemisphere!

Marco Polo can also be cited. True, he mentioned only Ceylon, but at the same time he described it as the world’s largest island, bringing dimensions several times larger than real, arguing that in ancient times it was even larger.

Information about the second land near Ceylon and in the almost unchanged Buddhist “models of the world” (mandalas) have been preserved. In this mysterious island is called Saran-dvipa, which is very similar to the ancient Arabic name of Sri Lanka – Serendiba. By the way, Ceylon himself began to be called Sri Lanka relatively recently. But the name “Lanka” is already contained in the “Ramayana”, which narrates about events that took place more than three thousand years ago. Including the conquest of Lanka by the god Rama.

But another mystery is connected with the Dravidians. This large people, who settled the whole subcontinent, came completely unknown from where and has no close relatives anywhere in the world (in this they are similar to the Sumerians). In a very remote relationship, the Dravidians are with the Indo-Europeans, and with the Ural-Altai, but this is quite gray antiquity, of the order of 10-12 thousand years. Or even more. But by the time they came to India, they were already a completely separate ethnic group.

The most interesting thing is that their settlement was, apparently, from the south to the north. So where did they come from? With the disappearing Taborban? By the way, the Tamils, who inhabit the South of India and Ceylon, have legends about the “great outcome” under the leadership of the god Shiva. Mentioned in their mythology and about the sunken earth in the ocean.

The Babylonian priest Beros in the times of Alexander of Macedon wrote about the ancient deity Oannes, which came to people directly from the sea depths. God, who had the appearance of a large fish covered with scales, taught people many crafts, writings, and agriculture.

By the way, it is interesting that the Phoenicians who were living on the Mediterranean coast in the area of ​​modern Lebanon and Palestine were “answered” by the god Dagon, who had the fish in the lower part of the body (this he looked like a mermaid). Some researchers associate Oannes with one of the three main gods of Sumer – the lord of the underworld and waters, the god of fertility Ea, or Enki. It was Enki, according to the views of ancient Sumerians, who taught people crafts, he also taught the local prototype of the Biblical Noah to build an ark before the Flood.

There is a point of view that Ea got to the Sumerians “inherited” from the Ubaids, who lived in South Mesopotamia even earlier. This people is associated with other ancient inhabitants of these regions, the Elamites. Here it is worth noting one more point. There is a point of view that the Elam language is the closest to the Dravid language. So, for example, many Sumerian cities in the name contained a particle “Ur”. This is Nippur, Uruk and “just” Ur. At the same time in some Dravidian languages ​​”ur” means “village”. Of course, this can be a simple coincidence, and the connection of protosumers and Elamites with the Dravidians for today is only one of the hypotheses. But what is known for sure – the Ubaidians began the development of the territory of the Mesopotamia from the southern coast and the estuaries of the rivers. At the same time, they were originally good sailors.

Another thread from the mysterious southern land stretches to Egypt. In extant rock carvings we can find pictures of ships that were not used by the Egyptians. These are flat-bottomed boats with steeply curved stern and nose. According to the Sumerian news, similar ships visited Mesopotamia as well. At the same time they sailed from the southern island, which was called Dilmun. Where exactly was this island, we do not know. But that’s not all. Same exact ships, it turns out, are also depicted on seals relating to Proto-Indian culture! Something turns out too much coincidence, do not you think?

There are other reasons for the existence of a large land in the Indian Ocean. This is the similarity of the geological structure of India and South Africa, and analogies in the flora and fauna of Madagascar and Asia. But in this case we are not interested in this at all. After all, the geological structure and similarity of the animal and plant world could have been preserved with the disappearance of the Lemuria millions or at least hundreds of thousands of years ago. Of course, in this case, this country would have very few chances to get on the maps of Piri Reis and Fra Mauro.

So why did Taprobe disappear? Of course, it could be an earthquake or some other natural cataclysm. But here the epic and the sacred books of the Indians are of particular interest. Thus, the “Ramayana” testifies to the use of “heavenly weapons”, “fiery chariots” in wars in the south, and so on. Some descriptions are suspiciously reminiscent of missile-bomb attacks, including nuclear strikes. Widely known is the example of Mohenjo-Daro, which bears the traces of a possible atomic explosion. Yes, and in Madagascar there is an increased radiation background.

And quite the same legends and the history of settlement among different peoples, first of all Dravidians and Ubaids, make one think about it. Still, it can hardly be called a typical settlement from the south to the north, given that the sea lies in the south and there is no large land. And, it is possible that the gods Oann and Dagon did indeed once, long ago, teach the crafts, agriculture and writing of the aborigines of the wild planet, on which their wrecked spaceship wrecked.