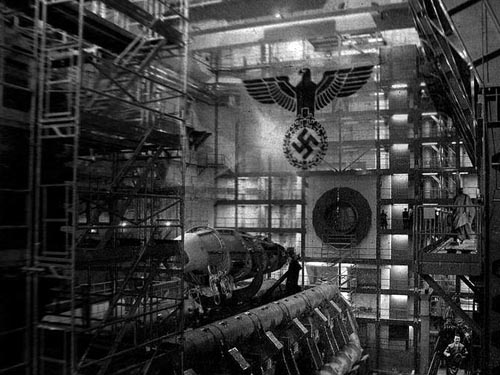 Lake Toplitz styled “Black pearl” of the Austrian Duchy of Styria. It is located 60 km South-East of Salzburg, in the Dead mountains, on the site of ancient salt mines. The length of the lake of Toplitz about 2 km, width – not more than 400 m. the Lake is quite deep, in some places 100 m.

The lake itself is quite scenic, but not the natural beauty that is already fifty years attracts treasure hunters from all over the world.

In 1945, before the end of the Second world war, the territory of the Nazi Empire was rapidly decreased in size. Soviet troops relentlessly moved West, on the opposite side of the fascist troops were close allies.

While Hitler’s army tried to keep the pieces when something easily conquered Europe, the Nazi leaders took swift action to save the huge number of captured values.

On the personal orders of Hitler, hundreds of trucks, loaded to the top “national treasure of the German Reich”, or more simply, money stolen throughout Europe for the wealth went to pre-cooked in the heart of the Austrian Alps recesses.

“In the end we will be defeated. England renounces the truce. Churchill will have primary responsibility to future generations for the destruction of the West. In a future war, Europe will be destroyed in one day; if our nation survives, he will need to restore the light of civilization to join the Western elite.

I want to leave a rich legacy for the future great Reich, who will come to power.”

These words are a true Testament of Hitler, was transferred to the historians in Spain in 1947.

At the end of January 1945, the German Finance Minister, Ludwig von Krosigk proposed to evacuate the gold reserves of the Reichsbank.

Hitler agreed, and from Berlin in the same direction went 24 wagon-loads of gold and platinum – bullion and in the form of jewelry, currency of different countries, foreign shares and Imperial paper money.

The routes of movement of the train, and especially the arrival was carefully classified.

But, unfortunately for the Nazis, the secret to keep completely failed. Numerous witnesses watched a convoy of trucks EN route, particularly in the direction of lake Toplitz.

Local residents saw of the cars was hiding in the mountains, and some SS men dumped directly in the lake water (!) dozens of huge boxes and metal boxes with the inscription – “Empire goods”.

The fact of the flooding in the lake such number of boxes with unknown, but likely valuable content seriously interested in American allied command, and a group of military divers in may 1945 began the search.

Work stopped only after one of the divers brought to the surface with the knife under the shoulder blade. It was the first of the mysterious cases where people died while trying to raise the submerged boxes.

In principle, nothing surprising in this assumption there, considering the rumors of secret Nazi submarine bases in Antarctica area and other areas of the globe.

In February 1946 on the banks of the lake there is a small tent. It settled two engineers from Austria. Their name was Helmut Mayer and Ludwig Pichler. Along with them came a certain John Haslinger.

Visitors, at first glance, not exactly pay no special attention to the lake, for some reason decided to climb the coastal mountain Rauchfang. Haslinger probably knew about possible dangers, because returned to the camp halfway.

A month passed, no news from the other two climbers have been reported, and, eventually, began their search.

After a few days, a group of rescuers high in the mountains of the Dead was shocked by the horrifying sight: near folded out of the snow hut was two corpses.

The belly of Ludwig Pichler was ripped open, the stomach is cut and tucked into a backpack. Who and why did this cruel and utterly incomprehensible from the point of view of logic, the crime is still unknown. Because it was just shoot accident!

The consequence managed to find out only the fact that the end of the war Helmut Mayer and Ludwig Pichler worked on “experimental station”, located on the shores of lake Toplitz.

According to Nazi archives, on this basis, the German Navy conducted tests of new weapons. It is possible that these two were witnesses or even participants in the bookmarks of caches.

In the summer of 1952 at lake Toplitz in search of the treasure went to the geography teacher from France named Jean-de-POPs. A week later, one of the locals stumbled close to the lake for the corpse of the unfortunate teacher. Near the body of Jean, the investigators found a fairly deep hole.

When it was covered with earth from the dump, the land was not enough. The conclusion was obvious: Jean de POPs found something that took up a large volume. For that he paid with his life.

What happened to what he found, is another mystery.

Come 1959 a Team of divers, funded by the West German weekly “stern”, has received a license to conduct diving operations in lake Toplitz.

The divers managed to raise from the bottom 15 of the boxes and containers of sheet iron, which were… No, not a search Nazi treasure and a fake English Bank notes 1935-1937 in the amount of 55 thousand pounds. It was a great disappointment to the expedition.

Work search group was suddenly discontinued after August 27, 1959 divers have lifted from a bottom drawer marked “In-9”, which were documents of the former Main administration of Imperial security, as well as lists of prisoners of concentration camps.

However, instead of congratulations the members of the expedition received a telegram with the strict order: “Further stay inappropriate. Immediately stop looking.”

The official reason for the withdrawal of the expedition was the alleged lack of funds. However, it was a blatant lie.

Only a few days before the telegram of the magazine “stern” has allocated an additional 30 thousand marks to conduct work on the lake. Wrote the Austrian newspaper “Volksstimme”, “stern” just gagged large sums of money. And this was done by those who really didn’t want some secrets of the Third Reich were made public.

Soon the local authorities had imposed a strict ban on unauthorized dip in the lake water.

6 Oct 1963 to his death in the lake of Toplitz found 19-year-old German Alfred Egner, a specialist in diving.

The circumstances of this drama is very suspicious, as Egner was not the first victim of the cursed treasure: to it in the treacherous waters of the lake or in the surrounding area, killing a good dozen of adventurers and, of course, the chain of deaths is not complete.

In November 1984 the mysterious lake began the government of Austria. Under the control of the gendarmerie was taken all the approaches to the Toplica.

Along with another batch of fake pounds the divers managed to raise to the surface, the rocket “V” weighing 1 ton and a length of 3.5 meters.

Examination of the hull of the rocket was very surprised by the army of miners: after spending almost forty years on the lake bottom, on the body of the rocket there was not the slightest trace of rust.

Findings suggests two things: either the body of the rocket was made of some impervious to rust metal (or was covered with some kind of compound, prevents rust), or the missile hit the lake recently.

But the main finding was observed ahead of the search engines. In the South-Western part of the lake with mine detectors and special detectors Austrian specialists of the mine action service has detected the presence of a large number of metal at the bottom and under the bottom of the lake. It turns out that the secret bunker in two lakes really exist?

Soon 70 m from the edge of the shore was found a passage leading to a system of underground bunkers. Sadly hunters, the move was blasted and clogged with piles of boulders and earth.

However, the Austrian police managed to find a witness who claimed that the end of the war, before filled up the entrance, he had been in the bunkers and saw a huge cave full of many boxes.

In the future, historians have found that during the Second world war to the lake of Toplitz brought the prisoners of the Mauthausen camp for the production of some secret underground work.

They are in the underwater part of the lake shot gallery. For this lake water at the time was moved aside.

The archives of the Federal agencies in charge of natural resources, confirmed that the water level in the lake for an unknown reason at the end of the war dropped by half a meter.

And then just for no apparent reason again took its natural level. By the way, to get into these podozrenie bunkers still to anybody and failed.

Nowadays, the search for Nazi treasures do not stop, the mystery of mountain lake Toplitz peace researchers positively not give.

In February 2001, at its bottom was taken by another, was thirteenth expedition. This time was used the most modern equipment – American deep-sea submersible “Phantom”.

Team “Phantom” signed a contract with the television company of si-bi-es and the Simon Wiesenthal center in Los Angeles, dealing, in particular, the search for pre-war deposits of Jewish victims of the Holocaust.

Divers had to completely survey the lake bottom and raise to the surface all that may be of interest.

The first dive was marked by a significant results. Mounted on the submersible camera was fixed in one of the deepest places several oblong objects.

With the help of robots, managed to catch and bring it to the surface galvanized 9 boxes weighing about 10 kg each. The rise was watched by hundreds of tourists for whom near has built a huge raft, the expedition was not classified.

Coast, where he had been a mysterious cargo, safely cordoned off by the police.

Observers could only see how the boxes were loaded into armoured trucks and under escort sent in Salzburg. About their contents, the authorities promised to tell only after careful consideration.

And while rumor has it. Someone tells about the safes, which allegedly concealed personal Swiss Bank accounts and lists of Jewish millionaires, were shot by the Nazis.

Still, the participants and everyone who watched the dive “Phantom”, more concerned with the legend of buried treasure.

In recent years on this subject written many books. One of the most famous authors – the Austrian author Markus Kaberle – proves, for example, that under the water of lake Toplitz the Nazis hid nothing, as the containers with the famous Amber room.

In total, according to experts, for many years studying the archives in the lake of Toplitz kept about a dozen of the most valuable treasures. According to experts, in this lake (or under it) in addition hidden 22 cans of gold Otto Skorzeny, 5 kg of diamonds Kaltenbrunner, the most valuable stamp collection that belonged to Goering, and finally, the drawers with the gold reserves of the Reichsbank.

Studies show that all these treasures at one time anyway, had been in the area of lake Toplitz.

I am surprised there are no comments for such a wonderful informative article. It really makes me wonder why the governments would not want to find details of historical significance of the past. Great job by the writer you made my day.