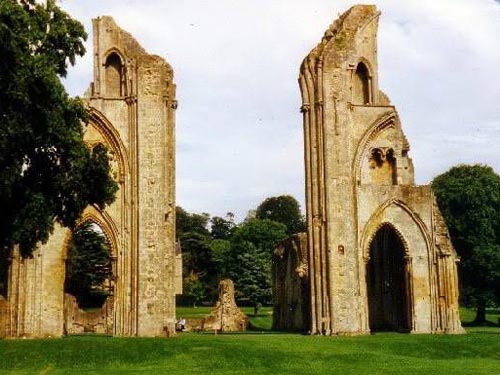 The most sacred and mystical place in the UK believe Glastonbury Abbey. There is a legend that at a young age, this place was visited by Christ, accompanied by Joseph of Arimathea.

According to legend, Joseph of Arimathea traveled to the British Isles on behalf of Philip, the first Bishop of Jerusalem, founded a small Abbey and a Church was built. It was thought that Joseph brought the Holy relics (the Holy Grail and the spear of the centurion Longinus).

In the middle Ages in Glastonbury, the monks built a magnificent monastery, named after St. Michael.

In the “Domesday Book”, compiled by the retinue of William the Conqueror in 1086, mentions this amazing building. The Church quickly became a place of pilgrimage, flocking crowds of people.

The Abbey towered above the surrounding swamps, and he was called Avaloncon island. Under this name it is often mentioned in the histories of king Arthur’s court.

According to tradition, the residence of Arthur was the city of Carlyon. It was considered the sacred center of the world. In the Royal Palace of Camelot was a Round table, behind which sat 12 knights.

The table symbolized the Time. Also Arthur had a magic cauldron, which he obtained during a trip to the underworld of annon.

Since the XII century the Glastonbury Abbey became famous as the final resting place of king Arthur and his wife Guinevere. At the end of the XII century, king Henry II ordered to conduct a search of a place of burial of his legendary ancestor.

In 1190, the tomb was found, as in the archives of the Abbey is preserved a detailed report. (At the end of the XX century, British archaeologists made an autopsy of the grave of king Arthur.

Medical examination of the remains confirmed that their age corresponds to the V-VI centuries, i.e. the time when the legendary king lived.)

By the time of the reign of king Henry VIII, Glastonbury Abbey was in a sorry state. Greedy autocrat squeezed from it everything I could, and then all his buildings were savagely blown up. A collection of unique libraries of ignorant robbers scattered throughout the County.

It would seem, a grandiose structure which existed for nearly a Millennium, are lost forever. But lying in ruins, it still attracts the attention of all those who are looking for clues he guards the mystical secrets.

So, it is considered a place where the Cup of the Holy Grail. It searches people are doing, wanting to join the innermost secrets of human existence. After all, according to legends, the Holy Grail is not a material object.

This Is A Knowledge. It is very changeable and ambiguous: it can transform into the Cup of Christ, which he sipped at the last supper, and maybe – in the so-called crystal well of wisdom.

In Britain, the Cup of the Holy Grail is called the well of Christ. In the XX century. his search took English writer Robert graves (1895-1985) is the author of the book “moon Goddess”, which, according to his own statement, was dictated to him in 1944, the… Mary Magdalene. She also told him that the Grail will be found in the sacred soil of England, near Glastonbury.

Since the expedition required a lot of money, Greyvzu must have been profitable to publish the book. And here it was uniform devilry. The first publisher called graves ‘ work “akrobaticheskoy the dust” and soon died of a heart attack.

The other somehow allowed himself to notice that the manners of the goddess maiden of the den, and suddenly hanged himself, pre-dressed in a dress. Wonderful lyric poet T. S. Eliot has treated labor colleagues more seriously. As a result, the book was published a decent edition and sold out instantly. The author received a prestigious award – the order “For merit”.

The night after the Banquet on the occasion of awarding the poet dreamed of the moon Goddess, which is several times repeated that is the guardian of the Cup of the Holy Grail.

Graves organized the expedition lasted only a week. Poet as if someone made me those places where it was necessary to dig. According to legend, the Grail was supposed to be in the grave of king Arthur. The well is found in another place, 100 miles West of the alleged primary burial.

Here’s how he described his wonderful discovery the poet himself: “crystal purple funnel colossal proportions completely empty, but evokes an impression that is filled with thick blood. Breathing the fumes of the well – aromas of honey and blooming Heather, you understand that this is the most perfect creation of the Almighty may take away the madness, and to bring to him, and to bring death, and to grant immortality.

But above all – insight. Contact with the Grail allows you to know everything about everything, but knowledge is carried away the lightest breeze, once the soul is born in the illusion of omniscience. I can’t measure my possession the Holy Grail.”

Graves gave a mandate to the diggers to fill the well, so he became unavailable for others. However, he then claimed not to know where is that cherished place. The poet lived a long life.

Dying, he bequeathed to his manuscripts reviewed, only five years after his death. Everyone was waiting for the sensation, but read this: “it is easy for Me, for the gifts of truth come from above”.

But the story of Glastonbury Abbey would be incomplete if not to recall the events that occurred earlier than the excavation of graves. In 1907, when the ruins of Glastonbury Abbey were purchased by the state, the English archaeologist and ecclesiastical architect Frederick Bligh-bond undertook excavations on the territory of the monastery.

He wanted to establish the location and the sizes of the two once existed there chapels: in honor of the Martyr and Edgar in honor of our lady of Loretta. No one knew where they once stood and how you looked, since these constructions are only mentioned in early descriptions of the Abbey.

So the archaeologist was not a starting point for the excavation, and the search in the old archives didn’t yield essential results. Without specific information to begin excavation work there was no point, and then Bligh-bond, as an experiment, I decided to bring my old friend captain John Bartlett is an outstanding and mysterious, possessing phenomenal spiritualist abilities.

The captain claimed that, in trance, is able to obtain and record in writing information from the past. Moreover, Bartlett allegedly could force their will to influence the events that are described.

And here 7 Nov 1907 Bligh-bond invited the captain in its Bristol office, where he was made a unique experiment. The architect asked John to take a pencil, and then he lightly touched his tip and turned to invisible to the Respondent with the question: “can you tell us anything about Glastonbury?”

There was no answer. Desperate friends were just chatting, when suddenly the pencil in the hand of the captain scratched an uneven line: “All knowledge is eternal and available to sincere thoughts of the mind.”

Friends were surprised and perplexed by this short message. Should they look for an answer or continue to ask questions? I decided to ask. And received various messages in Latin and old English. Especially important was the message on the so-called vulgar Latin, which was used many centuries ago.

It stated that the Edgar chapel to the Martyr was erected by Abbot beer. Then it was rebuilt. After that, John’s hand slowly began to draw a contour map of the top of the Abbey. On the scheme there was a strange shape figure. Instinctively Bligh bond felt it was one of the objects of the search.

He said, “Not the chapel?” Very slowly, letter by letter pencil in the hands of the captain responded: “Yes, this is Edgar’s chapel of the Martyr, long-destroyed and lost. The entrance through the partition into the back of the altar, 5 feet high, the chapel stretches for 30 yards to the East, stone masonry, horizontal, fan-like arch Windows with transoms and blue glass.

Mysterious informer of the underworld called himself Guillelmus Nanakusa (William Monk). Of course, the archaeologist could relate to these polurazbity records as to a funny joke. However, further developments have confirmed the seriousness of what is happening.

Using instructions of a mysterious monk, the workers soon unearthed in the Eastern part of the monastery remains of buildings with a length of 90 feet. Its location is fully consistent with automatic recording. But was it the Edgar chapel of the Martyr?

Further excavations yielded the answers to all the questions. On the remains of masonry were found the marks of masons. Everything coincided, the type of fan-like arch was exactly the way described it medium.

Then workers dug up what looked like a door with a threshold, the polygonal altar and the crypt. And around were scattered fragments of blue glass, as if yesterday there had been ravaging barbarians that destroyed the Abbey.

After this discovery, Bligh-bond was considered as the genius of archaeology. And he’s the same way I decided to check on the whereabouts of the second chapel. This time he received the messages in English language of the early XVI century Excavations have confirmed the accuracy of the information received.

The appeal of the friends to automatic writing continued for 10 years. During this time they have received hundreds of such messages, which are carefully dated and analyzed.

Was struck by the extraordinary detail of data – the data was given with an accuracy of inches. This is probably due to the fact that informants were monks, who lived a long time in the Abbey.

The author of the earliest entries in the notebook of Bartlett was a Saxon Askold. He said that long before the erection of the Abbey on the same hill they built a sturdy wooden house, which was later added to the monastery’s ownership.

In exactly the specified location and easily showed the remains of the wooden frame, hidden from prying eyes by stone walls thousands of years ago.

The authorities were delighted with the activities of the successful archaeologist: Bligh bond made a scientific feat – found long-lost Abbey, opened part of the unique structures, whose existence was not even suspected! Later, however, authorities became aware that Bligh bond resorted to such dubious sources of information as automatic writing, the existence of which no one wanted to admit. And though the merits were universally recognized archaeologist, in 1922 he was suspended.

In 1933, to retire the Bligh-bond wrote the book “Gates of memory”, where he described all of the message of a mysterious informant – and tested them during the excavations, and those that had yet to investigate.

Subsequently held an official archaeological search of the remains of the Abbey fully confirmed all of what he wrote. So the charges against him were unfair, as well as with automatic writing. By the way, a similar phenomenon – psychographics – has been long familiar to scientists.

However, from a scientific point of view, a person acting as a “receiver” otherworldly signals, looks unconvincing. It is believed that there is too strong a subjective factor, and therefore impossible to accurately determine the address of the source of the information: whether it is our subconscious mind, whether “a single information field”, and can still afterlife?

Maybe this is another confirmation of the religious postulate of “immortal human soul”, and beyond all that there is?