Mystery of the “potato famine” in Ireland 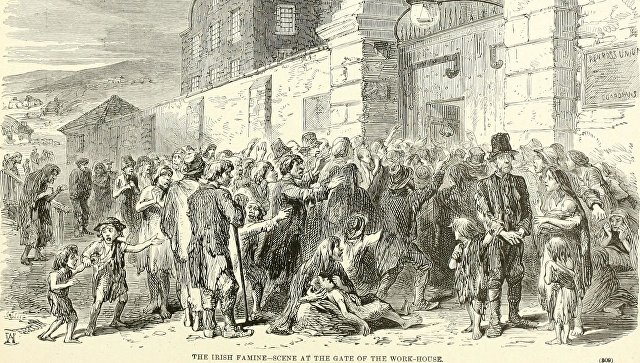 Late blight, responsible for the horrible “potato famine” in Ireland in the mid 19th century, first migrated to the U.S. from Colombia and Peru, and only then penetrated into Europe, say genetics.

Unlike other great epidemics of the past, the strain of vitaftor FAM-1 was distributed widely distributed in the U.S. since the mid-19th century to the early 20th century. He was replaced by another species of Phytophthora, US-1, and this strain, in turn, lost recently a place for Mexican migrants, said gene Ristaino from North Carolina state University in Raleigh (USA).

In the mid-1840s Ireland and many other parts of the world the first major outbreak of Phytophthora fungus Phytophthora infestans, destroys potato crops, the former in the main agricultural culture of the emerald Isle. Late blight destroyed the Irish potato for nearly six years, causing the population of Ireland decreased by about a quarter.

Then the epidemic began to decline, but late blight still remains a major source of losses in potato production worldwide. For this reason, scientists have long been interested in where this disease and why it appeared in Europe only two centuries after the potatoes started to grow in the Old world. Recently geneticists have found that the closest relative of this version of the Phytophthora are fungi, living in Peru.

In his new work Ristaino and her colleagues decided to find out how the late blight could spread from South America to the British Isles, and which stop she would be doing on the way to the Foggy Albion.

For this, scientists had to go to the museums on the territory of all countries of the New world, the UK and Ireland, and try to find them in the potato leaves and other plants of the period, which could be preserved spores of Phytophthora.

In total, the scientists were able to collect about 180 samples of Phytophthora amazing potatoes in Europe or in the New world since the mid-19th century to the modern era. Deciphering of its DNA, biologists have compared the samples together and tried to reconstruct the genealogical tree of evolution of this fungus.

Unexpectedly it turned out that two of the largest outbreak of Phytophthora Irish potato famine and the mass death of the crops on the East coast of the United States in 1843 — were directly related to each other. According to geneticists, the American version of Phytophthora, which appeared a little earlier, was the direct ancestor of its European cousins.

How could spread late blight to the ports of Philadelphia and new York from Colombia and Peru? The answer to this question, according to Ristaino and her colleagues, is active at the time trade is very unusual product – excrement of bats, which American farmers have used as fertilizer. The importation of such raw materials, coupled with the increased supply of potatoes from South America in 1843, according to the researchers, has helped the fungus to spread to new habitats and to gain a foothold in it, starting your journey around the world.

In Europe this version of the Phytophthora strain FAM-1 appeared due to a series of droughts that forced European countries to import potatoes from the United States and other countries of America. Once in Europe, along with seeds and tubers of potatoes to land procured by the inhabitants of Bermuda, England and Ireland, late blight FAM-1прожила in the Old world for about 30 years, after which it became extinct, leaving no traces. In South and Central America, in turn, it lasted much longer and gave rise to descendants that can cause a similar outbreak today.