Mystery of the Tere-Khol Lake 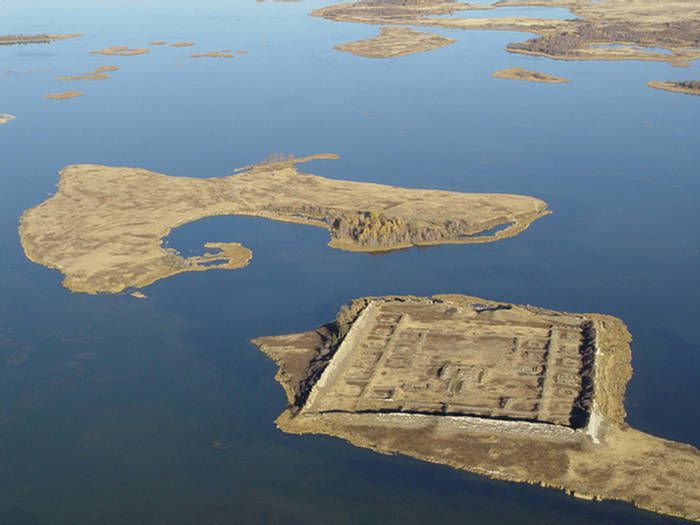 In the remote mountains of Tuva, almost on the border with Mongolia, at an altitude of 1300 meters there is a lake Tere-Khol. There are thousands of such lakes in the vast expanses of Russia, but this is unique. The fact is that in the middle of the water surface there is an island of almost perfect rectangular shape. And on the island is an amazing fortress, built in the VIII century is unknown by whom and for what.

The whole complex occupies 3.3 hectares. Once it was a grandiose structure with temples, warehouses, living quarters and walls 25 meters high. Even now the two remaining walls reach 8 meters and the same thickness. Ancient builders had to deliver thousands of tons of clay, bricks and wood to the region that was difficult to access even now. Tuvans call this place Por-Bazhyn, which in translation from Tuvan means “clay house”.

It can be seen that people built for ages, but very soon they for some reason left the fortress. In many places, traces of fire are found, but the researchers are almost sure: Por-Bazhyn was not killed by him. There are no traces of assault, nor many small finds, which practically always remain, if the fortified settlement becomes a victim of military aggression.

There are no burial grounds on the territory of the complex, although there are plenty of graves in the district. In general, it seems that in Por-Bazhyn people were very short-lived and left it suddenly. For example, in the smithy there are more than 100 pieces for forging, and in one of the rooms a tile in Chinese style is neatly made up.
The first information about Por-Bazhyn refers to the end of the XVII century, when researcher Semyon Remezov, who made a description of the whole of Siberia, mentioned the ruins of the fortress at the sources of the Yenisei. And in 1891, the Russian scientist Dmitri Klements got to Lake Tere-Khol. He described the strange fortress reliably. However, the first expedition to the lake could be sent only in the 1950s – it is very difficult to get there, and the climate is too harsh. In the summer – heat at 50 degrees and midges, and in winter – frosts in minus 50. On the roads, most of the year simply can not be passed.

From the very beginning, heated arguments arose around Por-Bazhyn. Some people believed that this was one of the fortresses guarding the Great Silk Road. But the northernmost branches of it passed a thousand kilometers to the south. It was also supposed that the fortress belonged to the robbers who robbed the merchants. But, firstly, where did the merchants come from, and secondly, how did the robbers build such a miracle?

Then the researchers found some similarity of the fortress with the North Chinese buildings, which allowed to datePor-Bazhyn in the middle of the VIII century. A fragmentary information of Tuvan legends allowed attributing the complex to the Uighur Khagan Moyan-churu. He ruled in 747-759 a vast and powerful nomadic power and became related to the Chinese emperors. That’s supposedly for the Chinese princess Ningo, who married Moyan-chura, the master of the Celestial Empire and built a country residence. However, the place was chosen very strange – it is so far from the center of the country that the version looks doubtful. Yes, and the temple in Por-Bazhyn as two drops of water is similar to the Buddhist, and the Uyghurs professed Tengrianism. However, no one version explains why the fortress was abandoned and forgotten.

The local residents have an explanation. They say that Por-Bazhyn was not always on the island. In the fortress lived the famous hero with his disciples. The enemies wanted to drive him out of the fortress and killed all the students. Then the strong man stumbled with stones the key that sprang up near the fortress, and the water filled the whole valley, cutting off the fortress and forcing people to leave it forever.

As is often the case, the folk legend was only partially confirmed. The lake is really subject to water level fluctuations, since the valley bottom is an ancient glacier. Now, for example, the area of ​​the island is increasing. With the help of aerial photography, they found an ancient road and a quarry at the bottom of the lake, in which the builders of Por-Bazhyn took land. In addition, under the water are some buildings that were once part of the complex, and then were flooded.

No less interesting and useful were other stories of local residents. For example, they claimed that on the western shore of the lake there were the gates of Genghis Khan, where the great conqueror stayed. Archaeologists managed to unearth a strange ritual complex exactly at the point where Tuvans pointed out. These are three vertical slabs of white marble and a stand-alone stone, on which two ancient lines are engraved with ancient Turkic runes. 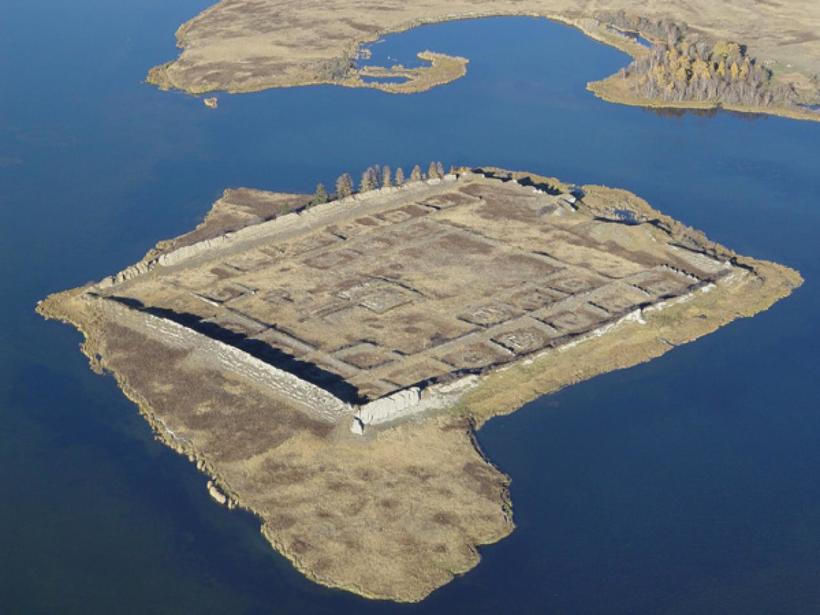 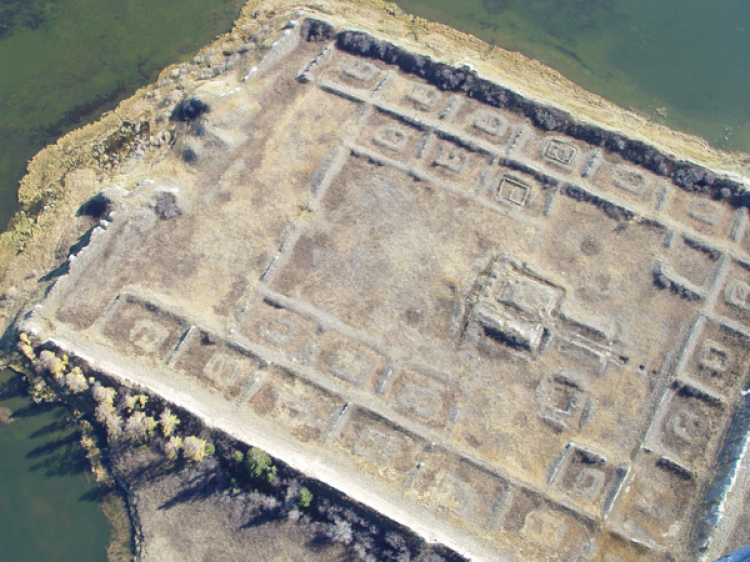 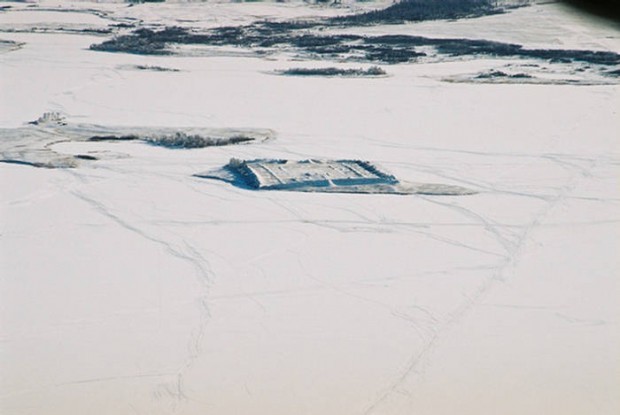 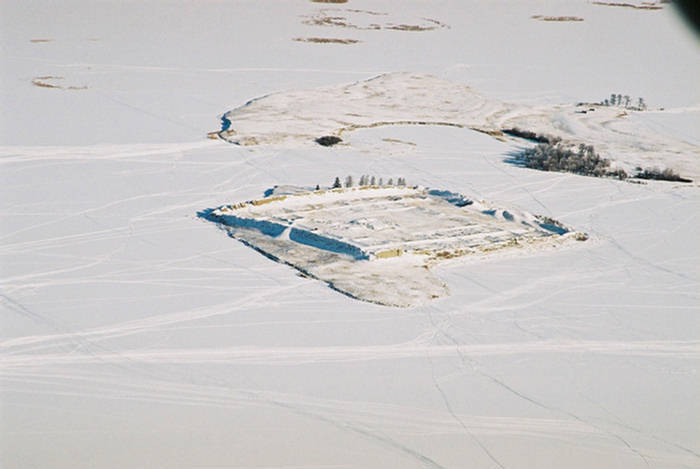 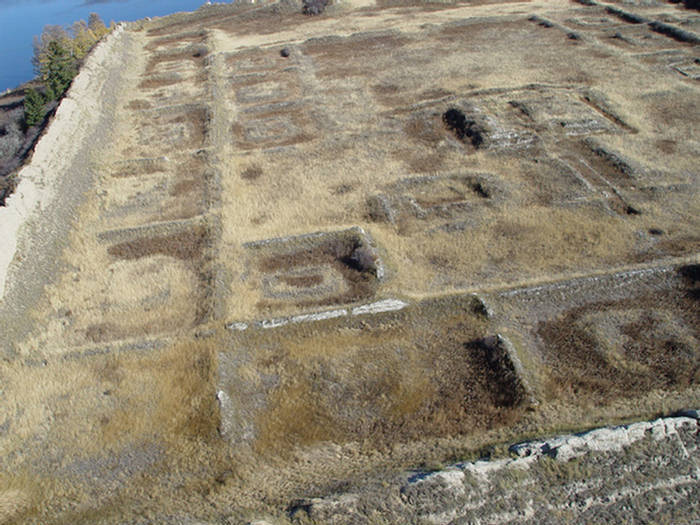 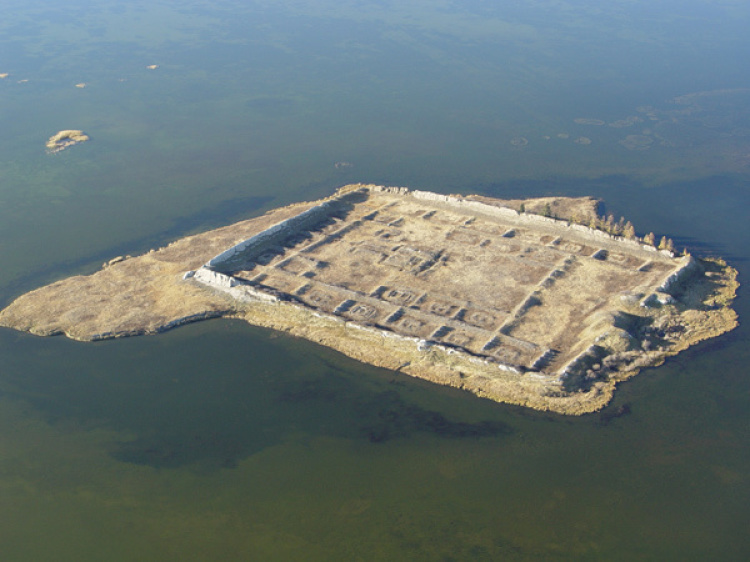 The inscription refers to a certain Buchush-Erkin (Buchush – Uyghur name, Erkin – one of the highest titles among the Uighurs). Perhaps it was the commandant of the fortress that surrendered to Genghis Khan, and the memorial complex is precisely devoted to the act of surrender. The fact that the founder of the Mongolian state more than once passed with its hordes in these parts is not news. True, whether he was in Por-Bazhyn and whether Buchush-Erkin was his contemporary, has yet to be established.

By the way, many fans of historical mysteries are convinced that the grave of Genghis Khan is located somewhere in these places. But this is a completely different story.

Lake Tere-Khol is a rather strange place without a medieval fortress. It has long been believed that its surroundings are not inhabited. The Tuvinians avoided these places, considering them “evil” and “bad.”

There are absolutely no traces of human life in the district – all the mounds were left by nomadic hordes passing by during the Great Migration of Nations, and after that no one lived. Described these places as deserted and Clementz.

But already the first expedition of Soviet archeologists collided with Tuvan shamans. Contrary to their usual secrecy, they willingly approached the camp and communicated with aliens. Yes, and gave – an unheard-of thing – the right information about the hidden from the eyes of monuments. Surprisingly, but for centuries not wanting to settle near the lake, the Tuvans knew very well where and what to look for.
They also showed “bad” places. Indeed, there are areas with abnormally cold water in the lake. Some places on the shores are avoided not only by animals, but also by birds. And people felt uncomfortable there. In some places it was not possible to boil water, as if the lake is not at an altitude of 1300 meters above sea level, but much higher. Surprisingly, the presence under the entire lake of a powerful (more than 100 meters thick) permafrost layer, because Tere-Khol is located at the latitude of Kiev.

Even more puzzles were thrown by geophysicists and surveyors who investigated Por-Bazhyn. They found mysterious emptiness beneath the fortress. Some of them are small and come close to the surface, others stretch to a hard to determine depth and are very extensive.

Tuvan shamans claim that not far from Por-Bazhyn there is a northern entrance to the mysterious Shambhala. Of course, no one can specify where exactly, but from this the mystery does not become less inviting. Special evidence, even from the field of conjectures, this version is not. But in due time the Buryat physician Peter Badmaev and the confidant of the Dalai Lama XIII Agvan Dorzhiev traveled to Tuva. Dorzhiev repeatedly visited Tuva and after the expulsion of the Dalai Lama from Tibet.

However, Shambhala would not be a mythical country, if the entrance to it was open to everyone. But without any help from shamans, archaeologists managed to find a very strange grave in the vicinity of Por-Bazhyn. It was located on a small island in the Tere-Khol lake. It was discovered accidentally: the rock collapsed under the influence of the environment, and a part of the burial was exposed.

It immediately became clear that this was the grave of a warrior. But only his weapons and bones did not match the type of local population. It is quite obvious to specialists that he was European. This is indicated by the section of the eyes, the growth and structure of the skeleton. But weapons – remnants of the shield, sword and spearhead – have nothing to do with Asian civilizations. All this could be forged in Western Europe sometime in the 12th century. About the same speak and a few rings from the chain mail.
Unfortunately, very little of the equipment of the unknown wanderer survived. But the remains of clay utensils and bone products – of Asian origin. The supposed date for the burial of the warrior even more confused the experts – most likely, it is about the turn of the XIV and XV centuries. Por-Bazhin was abandoned by that time. What a European warrior did in the mountains of Tuva, it is impossible to guess. Was he looking for Shambhala?

While most scientists prefer less romantic than all previous versions of events. It is enough to assume that the researchers were mistaken in the dating of the walls of Por-Bazhyn for only 300 years, as everything falls into place.

Son Moyan-Chura Idigyan, turning to China in Manichaeism, planted it among the subordinate people. But the vast majority of the population, including the nobility and the military, did not want to give up traditional beliefs. In 779, an uprising broke out, during which the kagan and about 2,000 of its approximate Manichaeans were killed, and foreign temples were destroyed. If the construction of Por-Bazhin was completed by the year 779, it is quite understandable why it was almost not used and was suddenly abandoned after a minor fire. And later, representatives of the ruling dynasty restored power, but they did not want to return to the mountain fortress.