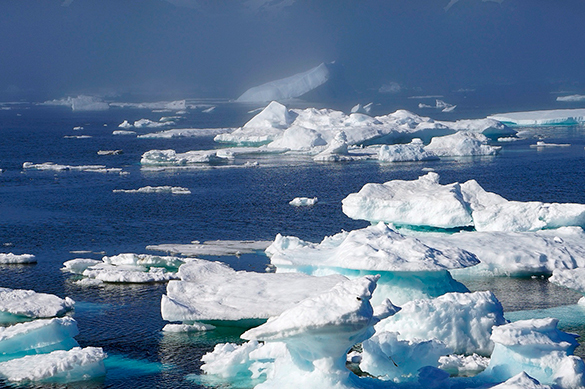 Seventy-two years ago, in September 1944, on the island Alexandra Land, part of the Arctic archipelago Franz-Joseph, was made a truly sensational discovery — an underground shelter that was meant for the deployment of German submarines. But to this day there is no official information on this subject, only scarce information in the media…

In the late 50s on the Peninsula Polar Pilots, close to the former German airfield, began to build one-the Soviet. Still not clear why it was decided not to use the existing airstrip, conveniently located and beautifully landscaped…

During construction, it was discovered ventilation shafts, on which at first no one paid attention. But then they accidentally noticed the pilots examined from the height of a German airfield. Then they saw the entrance to the grotto under the rock, but down there they failed, because the tide is coming in and the cave began to go under water…

And only later it turned out that in September 1944, inside the underground base of the Nazis happened to be the commander of a minesweeper T-116, captain-Lieutenant V. A. Babanova.

Searching for the secret base

T-116 together with mine layers Murman was sent to Franz Joseph and the North island of New Lands to provide wintering reserves of the crews of weather stations. Shortly before that, the T-116 sunk in the Kara sea, the enemy submarine U-362. Amid the wreckage of a German u-boat was a canvas bag with some papers. Probably, among them the commander and found out about the secret submarine base located on the Arctic island.

24 Sep 1944 T-116 and Murman approached the ice edge at 50 miles from Tikhaya Bay (Franz-Joseph). Then the ships separated: Murman went on the ice in the direction of the polar station, and a minesweeper were left to wait. It should be noted that another task Babanov was a search for secret Nazi bases. It was about a week before the arrival of Murman, and he turned to Alexandra Land.

In the depths of the rocky subsoil

Unfortunately, information about this journey, taken only from unofficial sources — the memories of those who Babanov has shared his discovery… it is Known that he went down the narrow stone stairs into the bowels of the rock. He described carved in a rock niche, a comfortable log structure, equipped with fireplaces — they were covered with a camouflage net. Inside the base the commander of the trawler discovered two piers. One of them was crane Demag, destined for the mine and torpedo loading equipment. The second was intended for repairs and charging batteries. Electrical cables were fully operational.

All described by baranovym fully correspond with the descriptions of bases for submarines, built by the Third Reich, is given in the memoirs of Grand Admiral Karl Lucifer. As a rule, these facilities were divided into boxes, each of which could be simultaneously three or four submarines. The boxes were separated from each other by thick concrete walls. From the sea each was protected by massive shields-gates. The thickness of the coatings exceeded eight metres. In these superseding bunkers, the submarine went through all the stages of preparation for sailing, and the crews here are not only preparing for future operations, but comfortably rested. Here was equipped the warehouses with supplies and food.

Where could be open by baranovym base? Modern scholars, based on the stories of captain-Lieutenant and Colonel I. Mazuruk, commander of the polar pilots, came to the conclusion that the search for it should be on the Bank between lake Pinegina and the Bay Country, or near East glacier Islands… by the Way, the glacier area in the mid-70s there was an American nuclear submarine, the crew of which carefully studied through binoculars the surrounding rocks. The second time an American submarine was able to detect in this place in 2000. Interestingly, it took the Americans here?

Meanwhile, Atambaev has not prepared a formal written report about their discovery. Anyway, in the archival documents of the headquarters of the Northern fleet there is no mention of the mysterious underground grotto on the Alexandra Land. However, maybe this is still stored under the secrecy?