Neanderthals were smart and skillful 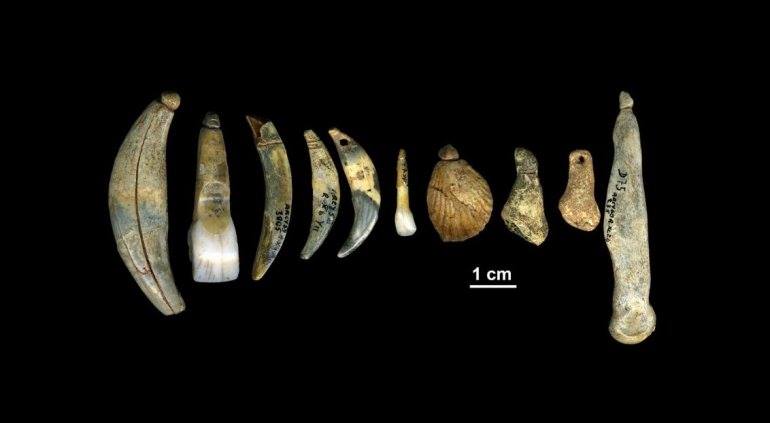 Analysis of ancient proteins showed that the bone fragments found by archaeologists in a cave Grotto du Rennes in France, belong to the Neanderthals, who died 42 thousand years ago. Found in the same layer of ornaments and weapons, probably was also taken by this kind of people. Experts call this discovery a landmark, as they broaden our understanding of the Neanderthals as an intelligent, skilled people, capable of symbolic expression.

Archaeologists recovered artifacts in the cave Grotto du Rennes in France in the period from 1949 to 1963. It was beads of animal teeth, shells, ivory no larger than a centimeter, and tools from the bones belonging to the culture chatelperron. These findings sparked a debate, as there found the bones of Neanderthals. It was thought that the Neanderthals are not able to draw guns and jewelry. In 2010, expert Thomas Higham (Thomas Higham) from Oxford suggested that during the excavation was disturbed layers and the findings are mixed.

Matthew Collins (Matthew Collins), bioarchaeology from the University of York in the UK, a pioneer in the study of ancient proteins, has decided to apply new methods in the analysis of artifacts from the Grotto du Rennes. Despite the small size of bone fragments, the analysis clearly showed that they are human. But what species do they belong?

Collins and colleagues compared the chemical composition of the collagen of the studied bone fragments from the bone collagen of modern and archaic humans. Modern human collagen contains large amounts of aspartic acid (amino acid). And the ancient were rich in collagen other amino acid — asparagine. Earlier it was established that the DNA of Neanderthals include the gene that produces collagen, which probably contributed to the enrichment of collagen asparagine.

To check the results, the researchers sequenced fragments of mitochondrial DNA and found that the bones belonged to individuals who had a maternal line ancestor of the Neanderthal.

Found collagen, apart from being archaic, was another of bones, which at the time of death grew. The fragments contained a large ratio of isotopes of nitrogen, which indicates that nursing infants. Both experiments led the authors to the conclusion that at least some bone fragments are pieces of skull of the Neanderthal child. Direct radiocarbon Dating gave an age of the bones around 42 thousand years. It then created the beads and guns culture chatelperron.

“You can come up with many explanations but the simplest is that this accumulation [of artifacts] are partly made by Neanderthals,” said Jean-Jacques Hublin (Jean-Jacques Hublin), co-author, paleoanthropologist from the Institute of evolutionary anthropology max Planck (Germany). He believes that Neanderthals, apparently, borrowed ideas, tools and ornaments from their more modern neighbors, but made the items yourself.

“For the first time bones of Neanderthals directly dated in this key place, and it