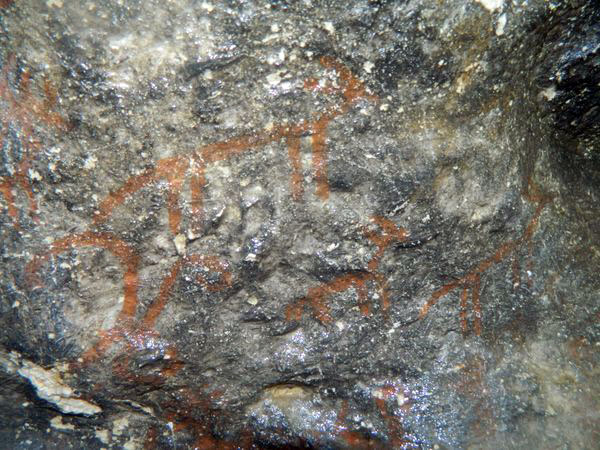 A few months ago, a simple inhabitant of the Bakhchsarai area found on one of the rocks near his village unusual patterns similar to petroglyphs — rock paintings of the ancient inhabitants of the Peninsula. He said this scholar, who first questioned the possibility of such discoveries, but, subsequently, the discovery of a unique ancient images was confirmed.

Many times we went past

The place where they were discovered cave paintings known to archaeologists for a long time. Here, near Mangup, has repeatedly worked with the archaeologists who conducted the study of the settlement — the so-called Taurus asylum, which was considered well studied. Similar settlements were constructed tees — the inhabitants of some regions of the Crimea of the bronze age (several centuries BC) and until the last few centuries BC. Archaeologists generally divide the sites into two groups. The first household in its purpose (it is 57% of all studied sites), are towns, villages, Parking lots and holding pens. The second group characterizing mainly the spiritual culture and social structure of society, is a sanctuary and burial complexes-graves, cromlechs, menhirs, anthropomorphic stelae.

Shelters were constructed in particular as a defensive places and their defensive nature usually determined by the location of the rocky cliffs of the capes Inner mountain range. Sometimes in places archaeologists find, in addition to shards of ancient dishes and primitive life, the traces of the defensive walls. About the same “standard” pattern was also discovered on the mound. Except that in this district, presumably in addition to the settlement, could be a Taurus sanctuary. Cult object or an altar.

“It seemed that everyone there is already enough known that you can learn about this place? Suddenly one of the locals said that found on the surface of the rock near the Taurus asylum some drawings made with red ochre. At first we did not believe in the reality of such things. We’ve been there many times, walked by — oblivious. It should be noted that Crimea is not rich in similar monuments, which belong to the primitive epoch. There are only a few: Tash-air in Kachin valley Alimov canopy… And expect something will find some of the pictures are not. Therefore, skepticism arose. But still sent to a specialist who, to our great surprise and joy, confirmed the authenticity of the findings”.

The researchers then went to the scene and carefully sketched these images, pre-clearing them. They opened a gallery — 24 different images that form the three scenes. The first scene is men on horses, standing figures and animals similar to mountain goats. The second image chain, similar to a herd of horses. Third — shapes with widely outstretched hands and superhuman minds. It is likely that the ancient artist (or artists) depicted scenes from the daily life of his tribe, imprinting, including funeral rites.

“These murals by analogy more close to the drawings known to Tash-Aire. They reflect the realities of life of the local population. And show these places in ancient times was inhabited by pastoral tribes. In addition, however, while cautious, we can assume that it was an Indo-Aryan tribe”.
Details are still secret

Paintings found in the vicinity of Mangup, not only in appearance (style, color, and application method) is most similar to those known for the studies of Tash-Air, close to the famous cave city of Kachi-Kalion, but the number of them you can also map all the other rock paintings found in the Crimea and related to the bronze age are rare. And knowing about the fate of the pictures on Tash-Aire, scientists do not hurry to disclose the exact location of the new ancient gallery. After all, Tash-Aire, even before the great Patriotic war was opened 56 petroglyphs, showing some events, like the collision of two tribes. But to date, there are only about 30. The barbarism of our contemporaries — the main reason for the disappearance of unique drawings.

“While scientific publications about this object was not. But on this finding I reported at the conference in St. Petersburg dedicated to the memory of the doctor of historical Sciences, Professor Abram Carpenter, who was engaged in the study of the origin of the fine arts of Eurasia.”

In addition, given the actual coincidence detection of petroglyphs in the region of Mangup, there is the intriguing question: how many of these ancient monuments of the fine arts can “hide” in the Crimea?..