Near Salekhard found the cemetery of the prehistoric dogs 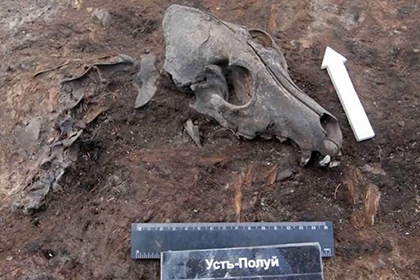 Scientists have found about Salekhard cemetery prehistoric dogs. Among the 115 graves age of two thousand years found the remains of five individuals buried with great magnificence.

Made in the Parking lot of the Ust-Poluy finding indicates the close relationship between hunter-gatherers iron age and “man’s best friend”. Dogs, apparently, pulled sleds, helped with the hunt and acted as a food source. They could also sacrifice during religious rituals.

“What is striking that the remains of dogs in Ust-Poluy much more than in the same sites, — 115, not 8-10”, — said one of the leading excavation under Salekhard archaeologists Robert Luzi (Robert Losey).

Fragments of the two sleds, and an image drawn by a dog on a bone handle of the knife suggests that dogs were used as pack animals. Moreover, dogs could help Ust-polycam feed and distill herds of deer. However, most of the animals whose remains have been discovered by the scientists was brutally murdered and probably eaten. On the bones of the traces of knives, and the bones themselves lay next to the remains of other animals that were eaten (deer and birds).

Luzi does not exclude that some of the dogs killed during special rituals or eaten during the solemn feast. “In one of the sections of the cemetery we found the slide of the 15 skulls of dogs, and their skull was opened in a similar way”, — said the archaeologist.

However, some Ust-poluyskoe dogs owners were treated differently. Five individuals buried on a separate plot — their skeletons have been preserved intact, and in the grave they laid on the same principles, and people. Apparently, the owners of these dogs were particularly attached to them.

The exact time of domestication of dogs (first domesticated animal in human history) has long been a subject of controversy among scientists. Proponents of the Paleolithic version (people have tamed wolves for hunting and transportation of goods) indicate a skull of the Robber’s cave (Altai) and the cave Goya (Belgium) Dating back to 30 BC.

However, not all agree that these skulls belonged to dogs. The first undisputed burials of dogs together with man belong only to the Neolithic age, when people already began to move to a settled way of life. Some scientists believe that the dog needed them as a source of meat.