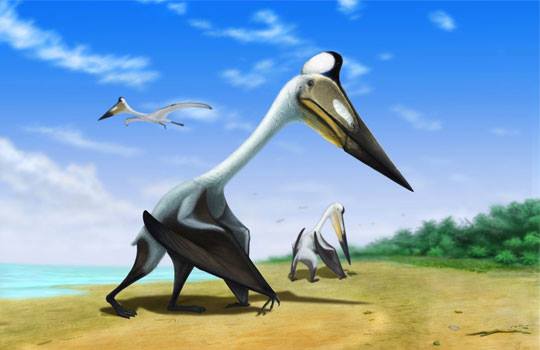 A group of Russian paleontologists studying the Mesozoic biota of the Volga region, described the remains of an unusual pterosaur that lived in the late Cretaceous period on the territory of modern Saratov region. The lizard belongs to the family Azhdarchidae is the most recent and advanced group of pterosaurs, common almost worldwide.

Unexpected and unique was the structure of the humerus of the animal. It is markedly different from such known azhdarchid as American Quetzalcoatlus, and rather resembles the Kazakhstan representatives of the family. It is possible, paleontologists reported the correspondent PaleoNews that on the shores of the Turgai Strait and the Islands of the archipelago of the Volga, there was a separate line Azhdarchidae
Pterosaurs, like modern birds, the bones were thin and light, riddled with air chambers for greater reduction in their weight. After the death of the animal bones are fragile, quickly destroyed. For this reason, the remains of pterosaurs are discovered very rarely, in any case, in the upper Cretaceous deposits of Russia.

Russian paleontologists described the fossils represent fragments of shoulder bones found in shallow marine deposits among the remaining fish, sea turtles, plesiosaurs and mosasaurs. Scientists believe that azhdarchidae nested on the Volga Islands archipelago, located in the Russian black sea in late Cretaceous time. Obviously, the pterosaurs were crawling on the beaches of the Islands from the water’s edge and gathered food – small crustaceans and carrion. Probably the corpse of a pterosaur was washed away by the waves in the sea.

Despite its small size – only a few centimeters is the best preserved humerus was informative, since it retained almost all the details of the structure of the proximal joint. Studying the fossil of a leading Russian expert on pterosaurs, Professor of St. Petersburg University Alexander Averyanov easily recognized her as azhdarchid. But then the researchers had a surprise.

“The anatomy of the skeleton Azhdarchidae very conservative: differences between the taxa refer mainly to the structure of the jaws and cervical vertebrae. In this regard, it is noteworthy that the fragment discovered and described the humerus demonstrates the marked differences from the previously known shoulder azhdarchid. Its proximal articular surface is not saddle-shaped. This structure had met the paleontologists only found in Kazakhstan, pterosaurs Aralazhdarcho bostobensis,” said study co – author, associate Professor of Saratov state technical University Maxim Arkhangelsk.

The marked anatomical features indicates a large morphological peculiarity of azhdarchid from the Saratov region, the scientists write. – Residues with high probability belong to Volgadraco bogolubovi, previously described pterosaur from Kamenskih sediments from the same region. The similarity in the structure of the humerus azhdarchid from Kazakhstan and the Volga region may indicate the existence of a special line azhdarchids in the late Cretaceous on the shores of the Turgai Strait.”

The article Humerus of azhdarchids (Pterosauria, Azhdarchidae) from the upper Cretaceous of the Saratov region published in the “Paleontological journal”