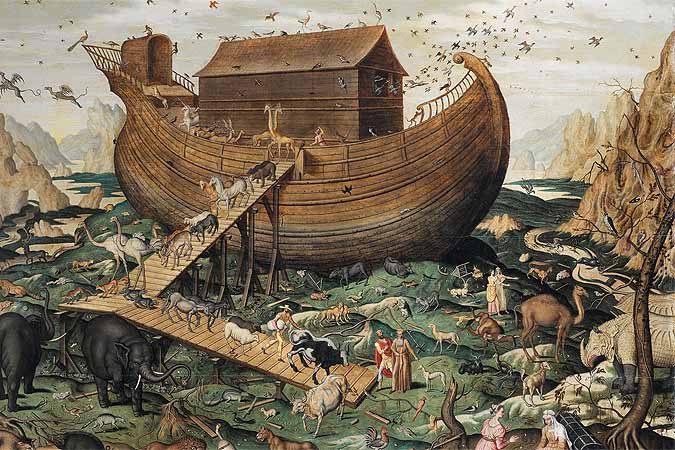 The mystery of the flood

In the world there are the people who would keep the memories of this event. Here is what it says about the crash of one of the codes of the Maya: “the Sky approached the earth and in one day all perished. Even the mountains disappeared under the water…”

The sacred book of the Indians of quiché (Guatemala) describes the catastrophe as follows:
“There was a great flood… People fled in despair, and insanity. In horror they were trying to climb on the roofs of the houses that had fallen and threw them to the ground. They tried to climb the trees, but the trees threw them, people sought refuge in caves and grottoes, and they buried people. The light faded, day and night it rained. Thus was completed the destruction of the human race, doomed to destruction.”

The Indians of Peru tell us that, according to their ancient lore, “there was such a severe flood that the sea went out of its banks, the earth was flooded and everyone died… the Water rose above the highest mountains”.

We can find such information in the legends and preserved the sacred books of all peoples of South, Central and North America.

The Indians of Alaska remember that during the flood, the few surviving people were saved from the raging waves of the canoe. Wild animals, bears, wolves also tried to get in UN-crowded boats, and they had to ward off spears.

Messages about the disaster and find we have the African peoples.

Thus, flash floods along the shores of both oceans was accompanied by strong volcanic activity and mountain building.

Mayan legends say that during a disaster, heaving the fiery mountains.
Other myths, also tells that the mountains in this area appeared during the disaster, confirmed some of the findings of scientists.

So, a Mexican researcher of Garcia Payon found in the Cordillera, under a thick layer of ice, two huts.

Surrounding limestone and traces of the sea said that once these huts were on the coast.

Now they were at the height of 5700 meters, where it can reside for a long time.

The Greeks described the flood as follows. The king of all the gods, Zeus decided to destroy the human race because people were godless and prone to violence.

“He’s already been cast lightning on the ground, but was afraid, as it were, from such a strong fire, not kindled the sacred air and do not burn the earth’s axis.

Zeus remembered the prediction of rock that the time will come when the sea, earth and the Palace of the lords of the sky will be on fire, when the flash the sky will collapse and all of the artfully-constructed building in the world.

Then he put the weapon prepared by the hands of Cyclops, and chose the opposite kind of punishment, determined to shed over the earth the rain, to the whole race of mortals drowned in the waves.

And here is the king of the gods was released from the caves where he kept the winds of Music — the South wind, bringer of rain. Flew Notes on their wet wings, hiding in the darkness its a sign of trouble lik.

With his beard, heavy with clouds, and gray hair spilled water. His forehead, chest and the wet wings over the fog.

As soon as the Music was gripping the hand of the looming clouds began to crackle and roar, and a prisoner in the clouds, the rain shower overthrown from the sky. The water washed away the crops, hoped for the farmer, and took them, killing all the labors of long years.

But Zeus was not satisfied with the sky, with his own power. His blue brother was at him with their auxiliary troops — waves. Poseidon summoned the rivers and, when they entered his Palace, he said to them:

— Now is not the time for long speeches. Speaking of the coast with full force. It should be so. Open all of your sources and tear down all the dams, give freedom to your.

It was an order. Rivers left the Palace of his king, mouth expanded their sources and unstoppable run a continuous stream rushed to the sea. He Poseidon hit with his Trident the earth shook and the jolt freed the path of the water.

Even the towers and they disappeared in the stream of water. There was not a difference between the sea and the land. Everywhere was a mirror of water, and this mirror was not the banks.

People saved who I could. Some looked for the taller hills, while others sat in the boat and worked the oars where until recently they were plowing, others were removed the fish from the tops of elms…”

As you can see, the area has come, apparently, only earthquakes (“Poseidon hit with his Trident the earth shook”), and the water though and filled all but flooded the high hills and did not rise above the tops of the trees.

There is a story about the flood in the Bible, which borrowed a message about it from a more ancient source. Babylonian clay tablets Dating back to the XXXIV century BC, also tell about the crash.

In the sacred book of the Persians “Zend-Ovest”, States that during the flood, “all the earth the water stood at the height of human growth…”

And within East Asia, in China, some myths claim that, during the catastrophe that befell the earth, the sea not only flooded the land, as in America, Africa and Europe, but, on the contrary, had receded from the coast in the South-East.

It is clear that if in one area of the globe was a huge tidal wave, and the waters came even to the mountain tops, on the opposite side it was supposed to be low tide.

This is confirmed by the fact, as gradually as it moves to the East, decreased height of the water cover in Central America, the water rose to the tops of the highest mountains in Greece — not above the hills and treetops and in Persia only to a height of human growth.

“The sky began to fall to the North”

Description of the disaster accompanied by a strange, at first glance, detail.
There are a number of reports that, after the disaster, some of the constellations was different. In particular, it changed the path of the motion of Venus.

In the XVII century in China was visited by the Jesuit missionary Martin Martinus. He spent a few years there, learned the language and returned and wrote a work “History of China”.
Here’s how to describe it, according to Chinese ancient records of what happened during the flood:

“…The pillar of the sky collapsed, the earth was shaken to its very Foundation. The sky began to fall to the North. The sun, moon and stars changed their course. The whole system of the Universe was thrown into disorder. The sun was eclipsed and the planets changed their tracks”.

About the same, about the changed appearance of the sky, wrote “one of the wiser Romans,” historian M. Terentius Varro, who had some ancient source.
“Venus, — he wrote, — change its color, size, shape, form and movement, which was never, either before or after it.”

The ancient Hebrews believed that the flood “happened because the Lord God changed the places of two stars in the constellation”.

In ancient Mexico there was even a festival dedicated to what the constellation, after the disaster, took a different view.

Especially noted the movements of Venus, which was one of the codes of the Maya, “brought death to the world”…

It is natural to assume that the change in the apparent path of the motion of Venus could be a result of changes in observation point, that is, under the influence of a cosmic body with a large mass, the Earth obviously came from its former orbit.

If it really happened, we should have a testimony that, before the disaster, the time of revolution of the Earth around its axis and around the Sun was different. And such testimonies are available.

Of course, one could say that these are all fairy tales and fiction. To do this it would be the easiest.

But folk wisdom says that the smoke without fire does not happen. Data on longevity, which contains the Bible, not isolated.

When archaeologists conducted excavations in the Middle East countries, they found carved on stone or written in cuneiform on a clay tablet texts about the deeds of the Chaldean kings that lived before the disaster. Many of these inscriptions were compiled during his lifetime, and some immediately after the death of the king.

The Arabs tell about their ancestor Shedd Ad-Ben-Ad, who lived before the flood. He lived for a few centuries. So far, the Arabs say: “Old as Hell”.

Stories about the longevity of people before the disaster is in America. The Indians of Guatemala are descended from some At-Titus, who lived, according to legend, four hundred years.

In different centuries, scientists and historians tried to explain these legends about longevity. So Josephus believed that the cause of long life was food, which was used by the people before the flood.

.And perhaps the reason — quite different?

Maybe once a year was considered a given period of time?

Indeed, if the Earth changed orbit, then a new path around the Sun it should not take place during the time that before, and the duration of the earth year wasn’t always 365 days. This is indicated by the finds in the prehistoric city of Tiahuanaco in the Andes.

This city, or rather its ruins, located in the Andes at an altitude of 4,000 meters. Those who have been in the mountains knows that at this altitude people even breathing hard, and live there almost impossible. Why would the people began to build their city so high up in the mountains?

But, it turns out, Tiahuanacu not always been at the height of 4000 meters. Traces of the big port, the remains of limestone and marine sediments suggest that once this city was above sea level.

In the ruins of Tiahuanaco, among the many symbolic images found strange calendar. He deciphered only recently.

Carved in stone the heads of Cougars designated nights (Cougar goes hunting only at night) the head of the Condor — days (the Condor flies by day).

Special signs symbolizing the Sun, the moon and other celestial bodies, But it is particularly important that, according to the calendar found in Tiahuanaco year amounted to only 290 days.

Perhaps this was the time of revolution of the Earth around the Sun before our planet was passionate about at the present-day orbit.

Many ancient traditions, religions and philosophies have argued that global catastrophe, which we discussed, is not the first in our land.

If so, it becomes clear another fact. The fact that the Maya, in addition to the usual calendar, rigorous and even be more accurate than the one we use, there is another calendar.

It was a so-called “sacred calendar”, the origin of which is still not known.

Year of the sacred calendar consisted of 260 days. It can be assumed that it refers to an even earlier period.

Thus, after each of the disasters, the movement of the Earth around the Sun, obviously, was lengthened. We may conclude that significantly slowed and the period of rotation of Earth around its axis.

Therefore, if the year was 70-100 days less than ours, and every day, moreover, much shorter, information about the long life of the ancients is not so implausible