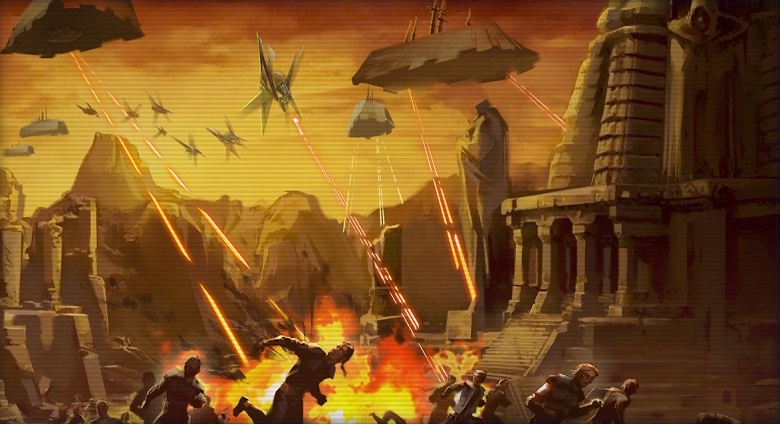 Mysterious melted pieces of glass found in the desert and Scotland can be evidence of many nuclear explosions thousands of years ago,

Ancient Hindu texts describe a global catastrophe caused by “an unknown weapon that melted even iron.”

Some believe that the proof of such a catastrophe is that in the Libyan desert, glass is found, which was formed somewhere between 26-28 million years ago.

Fragments of this glass can be found on an area of ​​10 square meters. km on the border of Egypt and Libya. Many scientists believe that the glass was formed when meteorites fell to Earth, as a result of which the sand melted and turned into glass. But even in a scientific environment, not everyone agrees with this hypothesis.

Engineer Albion W. Hart of the Massachusetts Institute of Technology says that pieces of glass, after nuclear tests in Alamogordo, New Mexico, the USA, were the same as in the Libyan desert.

In addition, there is no evidence of a giant meteorite falling in the area of ​​Libyan desert glass, and glass rocks have a degree of transparency and purity (99%), which is not typical for the impact of fallen meteorites.

A huge area of ​​strange fused quartz glass was also discovered in the Gobi Desert in Mongolia, including layers in Lop Nor in neighboring China. Analysis of samples of this glass showed that modern nuclear testing is not to do with it, glass was formed millions of years ago.

More than 70 ancient fortresses in Scotland have melted walls, where the stone melted into the glass after it was subjected to intense heating for a long time.

One of these forts can be found in Hill-O-Note, not far from Rainey, Aberdeenshire, Scotland, which is famous for its refined stone walls.

The last such area is Dun Mak Snijan in Argyll, and the melted stones can be found in Benderloch in Oban, Craig Fadraig and Ord-Hill, North Kessok, which are not far from Inverness.

In many ancient sources that have survived to our times, it is told about the ancient “war of the gods”, and, more simply, alien aliens whom the earthmen considered to be gods. At some time, these gods, something did not share the war with each other, but they did not fight with spears and arrows, but used aircraft that bombarded large cities and fortresses with something devastating like nuclear weapons.