Off the coast of Canada found American atomic bomb

Canadian diver, supposedly found off the North coast of British Columbia lost over 60 years ago, the American atomic bomb.

Sean Smyrichinsky saw a mysterious object with scuba diving off the coast of the island banks. “He was like a bagel cut in half (pastry similar to a donut), in which swirling bolts,” — said the diver.

In the course of their inquiries of local people revealed that 66 years ago in this region crashed bomber Convair B-36B USAF . 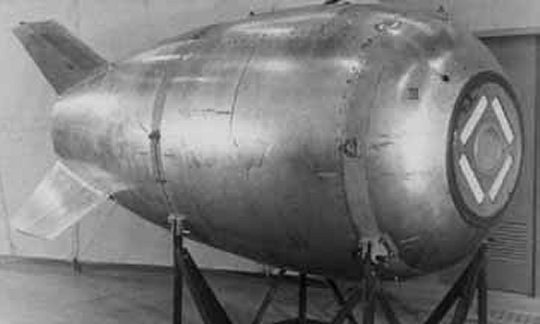 As the book historian Dirk Septer, 13 Feb 1950 B-36B with a nuclear bomb, Mark 4 on Board caught fire over the North-West coast of Canada. The crew managed to jump with a parachute, the bomber without the bombs were found after nearly four years in the mountains of British Columbia. The crash site was in a three hour flight in the opposite direction from the area where he was supposed to fall according to the calculations.

Only then, as noted in the book of Septera, the United States recognized the first in the history of the fact of loss of the atomic bomb. The incident has received the code name “Broken arrow”.

After studying photographs of the bomb Mark 4, Smerchinski recognized her as the detected object. He informed about the discovery of the canadian military, the Royal Navy decided to send to the area the ship for examination.