On June 18, 1178, monks observed mysterious explosions on the moon 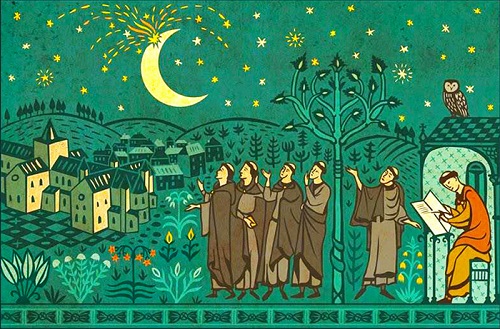 On the early summer evening of June 18, 1178, five Canterbury monks witnessed a remarkable celestial phenomenon. They saw “fire, burning embers and sparks” emanating from the moon and it suddenly split in two.

Friar Gervase was the chronicler of Christ Church Abbey. He claimed to have recorded everything that happened from eyewitness accounts accurately.

Gervase wrote that the men were looking at the new crescent when they suddenly saw its top suddenly “split in two.”

“From the central part of the moon burst forth as if a blazing torch, spewing fire, burning embers, and sparks at a considerable distance. Meanwhile the moon twitched like a wounded snake. Then it stopped, and then it happened again. The outlandish phenomenon was repeated again and again, several dozen times. The blazing fire took an infinite number of different forms. It would disappear, then it would reappear. Suddenly it stopped. After all this, the crescent moon, from edge to edge, along its entire length, turned black.”