On the margins of the UK found traces of ancient civilizations 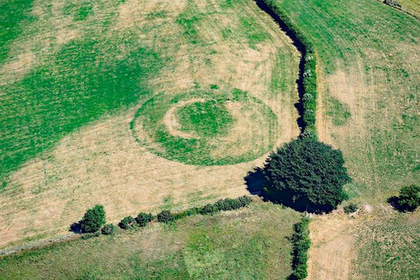 The archaeologists of the UK have discovered previously unknown traces of ancient structures that look like markings in the fields. The find was made possible by the heat, because of which the grass above the ruins, hidden by a thin layer of soil, grew differently than in the surrounding terrain.

As the newspaper writes, the marks indicate the location of the remains of the foundation of castles, fortresses, farmhouses and mansions that belong to different periods of time, including the primitive epoch (for example, the Iron Age) or the first half of the 20th century. Some of them are known to scientists, but a prolonged summer drought, which has not been analogous since the 70s of the last century, helped to discover new archaeological sites.

There are several mechanisms for the formation of such markers. Firstly, plants because of the heat can completely dry up if they grow right above the stone walls or foundation, which prevent the accumulation of sufficient moisture in the soil. In another case, water can accumulate in artificial ditches filled with soil, and then the grass above them, on the contrary, grows better than elsewhere.

Differences become apparent with relatively long periods of drought, so under normal conditions, the ruins remain hidden for many years or decades.

The 1976 drought helped British researchers discover many new archaeological sites. Scientists believe that the year 2018 can be just as productive, especially if we take into account the development of the technology of unmanned aerial vehicles, which allow us to see the markings from a height.