On the Sumerian tablets, a description of an ancient nuclear war 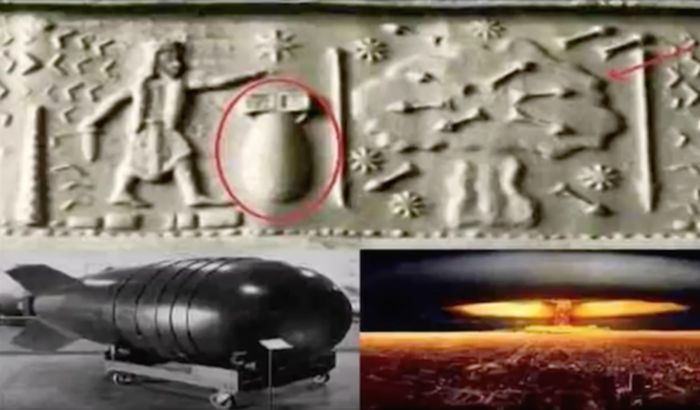 On the Sumerian tablets, an image of a nuclear bomb and the consequences of its application were found. The ancient Sumerians left behind many records on clay tablets, deciphering which, scientists assumed that this mysterious civilization was lost due to deliberate destructive actions.

The ancient Sumerians did not assimilate with the nearest nations and did not become the prey of the invaders, just thousands of years ago nuclear bombs fell on Sumerian cities! Then a young Assyrian state came to these territories, which occupied and rebuilt some empty Sumerian cities. What was the reason for the destruction of this mysterious civilization? Who and when did it?

Here is what the ancient clay tablets tell us: “Sumer suffered a great catastrophe, a huge hurricane, who came from somewhere unknown, dared the city, and then a fiery wind rose. The sun did not shine during the day, but the moon did not shine at night, no stars were visible. The air became poisoned, the plants did not grow, the cities became deserted. ”

The ancient Sumerians claimed that before this disaster the gods left the temples and people. In the ancient document called “Lamentation of Uruk” there are records where it is said that the gods went to the neighboring mountains and hid there. Why did they do this?

Maybe it was a planned operation, and the gods of the Sumerians took shelter in special bunkers, and after they blew up the bombs? Almost all cities are empty, records do not contain information about any war, it seems that this was a purposeful action.

The description converges with the consequences that come after the nuclear explosion: poisonous rains fell, the fiery wind burned, the water in the rivers and reservoirs became bitter, etc.

It can be assumed that the Ancient Sumer was overtaken by an epidemic, but in this case the description would contain very different details. In addition, for example, the plague would have no effect on the eclipse of the sky, did not generate a hot wind and would not change the taste of water.

Events in Sumer that occurred thousands of years ago became the prototypes of some biblical stories. Many scholars agree that the destruction of the cities of Sodom and Gomorrah is not a myth, the described details are very similar to the explosion of a nuclear bomb. Of course, it is not immediately possible to believe that in ancient times people knew about the splitting of the atomic nucleus.

But imagine, if our modern civilization was destroyed by nuclear war, our heirs after thousands of years would also be very difficult to believe that once there were people with a high level of knowledge and technology.

By the way, the ancient Sumerians claimed that the Dead Sea, known to all, received the properties known to us precisely as a result of the ancient nuclear “bombing”.

These bomb tablets look a little contrived, where else can we see them?

HMMM DID SHE S FIND HER TONGUE HMM MEAN TABLET.. S.. EXTRA ONES..