On the territory of ancient Russia there were crocodiles 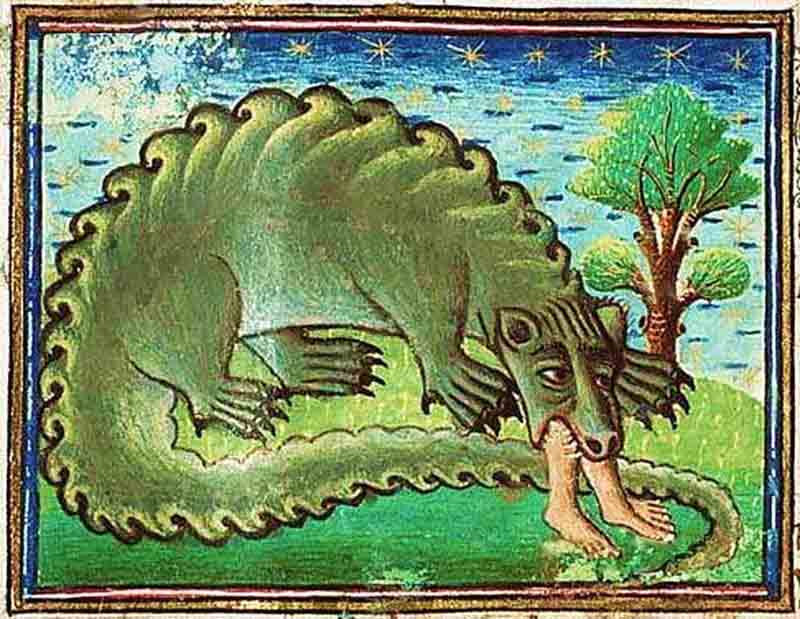 In ancient Chronicles there is a lot of evidence that on the territory of Russia in ancient times there were many strange creatures. I already wrote about the evidence in 1719 fell from the sky a black lightning dragon, the description is very similar to the ancient pterosaur, and there’s other evidence that the rivers were carried out the real crocodiles.

For example, in the Pskov Chronicles is such evidence – in the Summer of 1582, from the river came the crocodiles and started to attack people. People in a panic began to pray and cry out to God, hiding in the huts, but many of the crocodiles have eaten:

In the summer of 7090 [1582]… the same summer of Isidora crocodiles lutii from the river and the path of zatvorite, a lot of people piyadasa, and wacasassa people and MOLISA God in all the earth. And again spryatalas, and other izbica. The same year predstavila tsarevitch Ivan, in the Settlement, December 14 day.Pskov chronicle. Arhivski 2nd list.

In the annals of the legends of the Russian people in the late 16th century are these lines, – the Crocodile lives in the water, harming people:

Krokodil – the beast of water, thou mother of the person yasti, crying and crying, and yasti does not cease.
Azbukovnik the end of the XVI, Legends of the Russian people, vol. II. SPb., 1849

The temperature is mentioned in the manuscript Sigismund Herberstein, who visited Russia in 1526:

This region (Samogitia, Lithuania) abounds with groves and woods, where sometimes you can see ghosts… There is still a lot of idolaters, who feed in their homes (like land) some snakes on four (short) legs like lizards with black and fat body, no more than three spans in length they are called giwoites… on certain days they produce in houses, cleansing ceremonies and, when the snakes crawl toward the food, all the family with fear worship them as long as they was full, will not return to its place. If it happens an accident occurs, they attribute it to the fact that poorly fed and took home the deity (snake).

In 1589, the agent of the British trading company, Jerome Horsey, was driving from Poland to Russia and on the way encountered a strange beast:

I left Warsaw in the evening, moved across the river, where on the shore lay poisonous dead crocodile, which my people are torn belly spears. When this horrible stench spread around that I was poisoned and sick in the nearest village, where he met such compassion and Christian aid, it miraculously recovered.

About crocodiles can be found in the “legend of the princes of Slovenia and Ruse” of the “Chronograph” 1679 year:

Bolshy son of Prince sloven thereof – Volkhov becourtney and magician, deep in ludah and then there was a demonic trick and dream about doing and preobrazujas in the image of the fierce beast of corcodel and zalagasa in the Rotz Volkhov waterway. And neocolonialist him oirase oriented, oriented inversa photoplace. Our Christian the true word… About this damned sorcerers and Magi as evil resbien byst and strangled of devils in Retz the Volkhov and the dream demons cursed body worn was made up thereof Rotz Volkhov and cast out on the shore against vrhovnog thereof of the town, who is now called Purina. And with many tears from neviglas that was buried there was cursed with great trizno Pohansko. And the grave sipasa over him, Velma high, like a nasty there. And three UBO dneh the damned that trinida proydesa earth and pore vile body corcodilos. And his grave is prolipase kupno over him in the depths of hell, who to this day, as will tell, sign of the pit of the toy should not be loaded.

Dinosaurs, crocodiles… what secrets are kept in the ancient history of Russia…