One of the main myths about dinosaurs is disproved 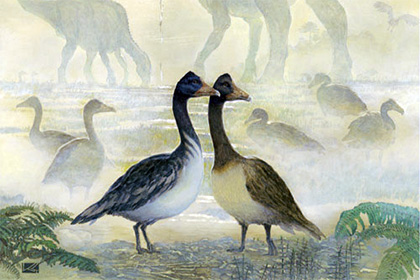 During excavation in Antarctica researchers could find out what singing of the first birds and dinosaurs was similar to. It is stated in article published in the Nature magazine.

Franz Goller from university of Utah in Salt Lake City together with colleagues found remains of the direct relative of modern birds — Vegavis iaai — which lived at the time of the Mesozoic behind a polar circle. Remains perfectly remained that allowed scientists to consider not only bones and feathers, but also prints of soft fabrics. By means of the tomograph Goller could study a structure of a sirinks — voice body of birds which is located at the trachea basis.

Comparison of this body of an ancient bird with modern allowed to establish that it practically repeats a structure of a sirinks of geese, ducks and other birds without singing skills. Proceeding from it Goller claims that Vegavis iaai at least could grunt and hoot.

At the same time dinosaurs who were the closest contemporaries of birds have no such body. Respectively, they could only make guttural sounds, without opening a mouth. Authors of article conclude that ability to issue difficult sounds, like trills, could become one of key factors of development of birds and an evolutionary benefit in comparison with other types of archosaurs.

In July, 2016 scientists learned that dinosaurs didn’t roar, having opened mouths, and cooed and clanged with the closed mouth, like modern birds. Many dinosaurs also inflated necks and made clanging sounds for attraction of females and scaring away of competitors. Ostriches can be the next analog among modern birds.