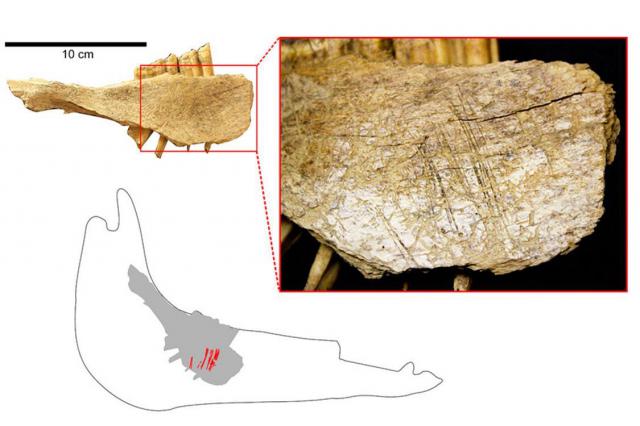 To date the oldest evidence of human presence in North America were subjects of age 14 thousand years. However, new findings made by the canadian researchers from University of Montreal, talking about the fact that mainland people were familiar with another 24 thousand years ago.

During excavations in a cave in Canada in the area of the Yukon near the border with Alaska scientists have discovered the jaw of the horse with scratches from the language. According to scientists, these marks were made when the animal had his tongue cut out stone tools.

Cave Blufish located on the banks of the river, was first studied by scientist Jacques Senko-Mar from 1977 to 1987. He spent radiocarbon Dating discovered in the caves of animal bones, which showed that about 30 thousand years. Scientists have suggested that this place was a Parking person. However, due to the lack of similar finds in other places nominated by Senko-Marom hypothesis was met with great skepticism in the scientific community. In addition, there was evidence that was found in a cave bones of mammoths, horses, bison and reindeer can be left just man, and not some predator.

Scientists from the University of Montreal decided to double-check brought from the Yukon remains that were stored at the Canadian Museum of history in Gatineau. All these bones were about 36 thousand. Researchers took two years to examine more thoroughly. The analysis of the samples revealed on 15 the bones of the tracks, which clearly testified to the fact that they were man-made. Another 20 fragments experts have found scratches that could also be attributed to the results of human activity.

Some of the scratches were in straight lines, the part had a V-shape. According to canadian specialists, such tracks were made by stone tools when skinning.

The bones were of different periods. A fragment of a horse jaw was the oldest. His age – 23 thousand – 24 thousand years.