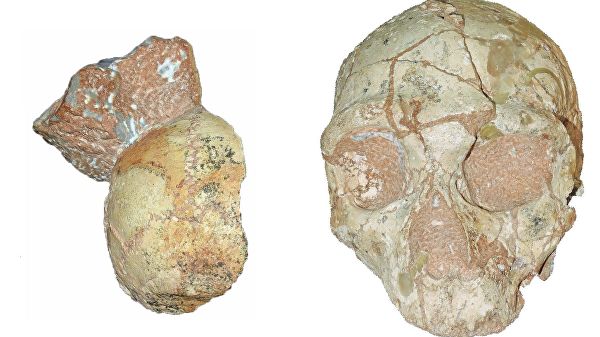 Scientists made an amazing discovery in one of the caves in southern Greece – they managed to find the skull of a Cro-Magnon who lived on the territory of the future Hellas more than two hundred thousand years ago. This suggests an unexpectedly early exodus of our ancestors from Africa, anthropologists write in the journal Nature.

“One of the skulls, which was found in the Apidymus cave, belonged to a Neanderthal man, and the second was an early representative of our species. His discovery suggests that our ancestors left Africa earlier and spread through the Old World faster than we expected”, said Katerina Harvati from the University of Tübingen (Germany).

On the other hand, the findings of recent years and genetic studies suggest that people could leave Africa much earlier, at least 130 thousand years ago, and have contact with Neanderthals for a long time. In confirmation of this, scientists recently discovered in the abandoned mine in Morocco the remains of Homo sapiens, who lived in Africa about 300 thousand years ago.

Early last year, Indian scientists found new evidence that humankind could have emerged much earlier than anthropologists believed, and unexpectedly early to leave Africa. They opened the “Cro-Magnon” labor tools, made more than 175 thousand years ago. Even more ancient traces of our ancestors were found a little later in Kenya.
Kharvaty and her colleagues found further evidence in favor of this theory, studying the materials of the excavations, which Greek archaeologists carried out in the karst cave of Apidymus in the southeastern seventies of the last century in the south-east of Greece.
In addition to various artifacts and tools, scientists found on its territory two fragments of the skull, preserved so poorly that their species could not be accurately determined. Archaeologists considered them ordinary “Neanderthals” and transferred to the museum for storage, where they rarely attracted the attention of other researchers.

German anthropologists have found that in fact these remains were one of the most important finds of the century, testing for them the work of algorithms that allow to restore the three-dimensional shape of the skull from its damaged fragments. At the same time, scientists accurately measured the fossil age by measuring the proportions of uranium and thorium isotopes.

Both the analysis and the other brought a lot of surprises – one of the skulls, preserved slightly worse than the second, really belonged to a Neanderthal who lived in the cave of Apidym about 170 thousand years ago. It turned out to be older than scientists had originally believed, but it fit well into the generally accepted notions about the life of these ancient people and their habitat.

On the other hand, the second skull not only turned out to be older – its age was about 210 thousand years, but it also belonged not to the representative of Homo neanderthalensis, but to a completely unambiguous Cro-Magnon. This is supported by the fact that his skull was more rounded than that of the first “aborigines” of Europe, and on its surface there was no characteristic “bump” that all Neanderthals have. At the same time, he possessed a mass of traits of the early Homo sapiens.

While this is the most ancient example of the fact that our ancestors appeared unexpectedly early. As Harvati noted, the skull from the Greek cave is approximately 20-30 thousand years older than the supposedly ancient remains of Homo sapiens, recently found in Israel. Moreover, they are 150 thousand years older than the bones of the “first” European Cro-Magnon men found in one of the caves in Romania and in the vicinity of the village Kostenki in the Voronezh region.

In her opinion, the inhabitants of Apidym Cave, as well as other populations of ancient Homo sapiens, who left Africa two hundred thousand years ago, ironically, suffered the same fate as the last European and Asian Neanderthals.

They, most likely, completely died out and did not leave their traces in the modern genome of mankind, having lost in the competition of Homo neanderthalensis. This is supported by the fact that Neanderthals, according to estimates of the age of the second skull, lived in a Greek cave later than the oldest Cro-Magnons.

If this is true, then Harvati does not exclude that humanity could make not one, but several attempts at once to populate the planet.

It is not yet clear how successful they were, since neither geneticists nor anthropologists have so far managed to find any traces of prolonged contacts between Neanderthals and Homo sapiens in this historical epoch or prove their absence.

Why did these ancient people end up in Greece? Scientists suggest that the reason for this was simple – the future Hellas at that time served as one of the zones with a relatively warm and mild climate, where the hominids, as well as the fauna of Europe during the glaciation, could survive during the regular attacks of glaciers and cooling climates. It is possible that other traces of ancient Homo sapiens are hidden in other “glacial oases”.

“This discovery suggests that our ancestors repeatedly tried to move north and west, moving from Africa to Europe through the Levant. It seems that they left it not only once, but many times, and not always these migrations ended in success” , – comments on Eric Delson (Eric Delson), an anthropologist from the City University of New York (USA).