People have invented clothes not only to be warmed 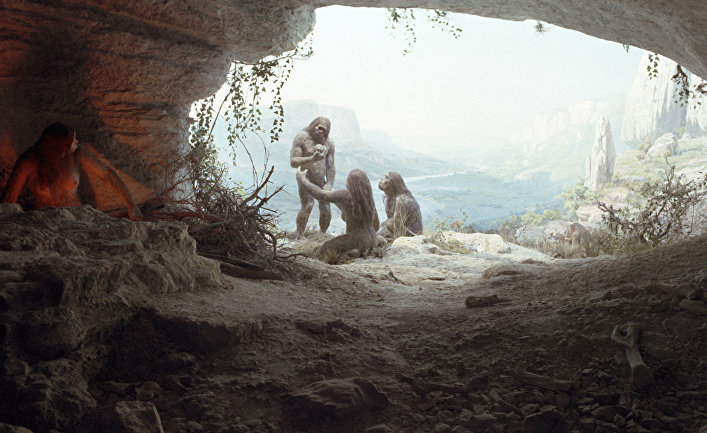 Why people need clothes? Protection against adverse conditions of the environment — not the unique reason for which we began to carry it and we carry still.

Stephen Gough so likes to go without clothes that for the sake of it he is ready to offer the freedom.

For emergence on public in a naked type it was arrested already a set of times, and in total he spent behind bars 10 years.

Gough also famous as “the naked tramp”, prefers to go outside nude in warm season.

It isn’t dangerous to society, however its attempt in 2003 caused a storm of indignations to cross all Great Britain from its northeast to a southwest extremity over all country.

When he decided to repeat this travel, he was quickly arrested. He carried out the most part of prison term in the solitary confinement because of refusal to wear clothes.

And still it is it is unlikely possible to deny that all of us are born naked. However, unlike Gough, most of us prefers to cover the body.

For this purpose there are good reasons: in a frigid climate the warm clothes salvage from a frost, and — serve as protection against the scorching sun in roast.

Nevertheless some communities of hunters and collectors still almost completely do without clothes. From this it is possible to draw a conclusion that the clothes have no the determining value for survival of the person.

If nakedness — it is so natural, then when we began to put on and what for?

The archeological finds testimonial of, when our ancestors, gominina (carry to gominina people, a chimpanzee, and also some childbirth of the highest primacies which died out today — the Comment перев.), ceased to go naked and began to put on themselves skins of animals, no as the clothes don’t turn into fossils.

Nevertheless, anthropologists nevertheless could determine time of emergence of the first clothes by means of a number of indirect methods.

In 2011 the scientists studying louses found out that everything began only 170 thousand years ago. They found out that two lines of louses — living on the head and on clothes — were divided approximately at that time.

In other words, as soon as people began to wear clothes, a part of louses moved on it and as a result developed in a separate type.

At that time the type of Homo sapiens to which all of us belong already lived in Africa. His representatives had any more no dense indumentum which helped more ancient gominina to be warmed at night and protected them from a heat.

Ian Gilligan from the Sydney university (Australia) considers that we could begin to wear clothes to compensate lack of indumentum.

But representatives of modern communities of hunters and collectors practically don’t use clothes. The ethnic group Nuer living in the south of Sudan can be an example of that.

It suggests an idea that protection against adverse conditions of the environment — not the unique reason for which people began to wear clothes.

It is possible to assume that they began to be ashamed of the body and wanted to cover it, however it is difficult to find direct certificates of it.

According to documentary sources, other communities of hunters and collectors, including fuegina from South America, periodically wore common clothes, but went also naked.

Possibly, ancient people covered the body only in cold season.

Outside Africa the clothes were vital as a security measure from cold. So, for example, other type of ancient people, Neanderthal men, lived in much more frigid climate, and without clothes just couldn’t survive.

Neanderthal men lived in Europe long before appearance of people of modern type here. Both they, and we have occurred from the general ancestor — as scientists, the Heidelberg person (Homo heidelbergensis) believe.

Thus, Neanderthal men have thought up to wear clothes long before us, modern people.

Apparently, each of these two types of gominin had the approach to creation of clothes.

“The clothes of Neanderthal men and people differ” — Nathan says Wales from the Museum of natural history of Denmark.

In the research published in 2012, Wales has counted that in winter months Neanderthal men needed to close 70-80% of the body to survive in climate of those regions which they inhabited.

For this purpose he has compared clothes which modern hunters and collectors use in various regions, and has correlated these data with climatic conditions in which there lived Neanderthal men.

Wales also claims that people of modern type needed slightly more clothes — they had to cover up to 90% of the body.

According to him, it means that Neanderthal men didn’t need to make the skintight clothes which are completely closing a body.

Today we have an approximate idea of what clothes they used.

According to the research published in August, 2016, Neanderthal men carried simple fur capes. Scientists have assumed that they were just wrapped in a skin of one animal.

The leading author of a research Mark Kollar from University of Simon Fraser (Bernabi, Canada) has found out that people of modern type hunted animals whose fur could be used for production of dense warm clothes. 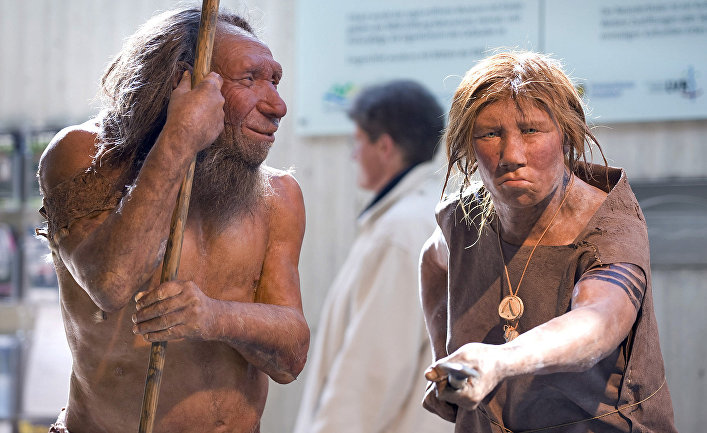 Glutton fur is a fine example of that. From it the excellent collar or a fringing for sleeves turned out.

The collar found out that gluttons even remain desired production for such tribes as Eskimos today.

“On these skins really there was a great demand, and it is connected with structure of fur — it almost doesn’t become covered with hoarfrost, unlike others — he says. — It protects from cold much better, than winter military regimentals”.

These conclusions finally convinced Wales that people of modern type led a life, other than Neanderthal men.

“Ability to make clothes very much helped people — thanks to it they could develop quickly new habitats — he says. — Instead of adapting to them it is evolutionary, it was possible just to create more perfect clothes”.

Despite it, Neanderthal men, with their small growth and a thickset constitution, were better adapted for more frigid European climate, than people of modern type.

They came to Europe long before us while people of modern type long time lived in tropical African climate.

As it is paradoxical, the fact that Neanderthal men were better adapted for cold, could become one of factors of their disappearance.

People of modern type had less strong constitution, and they were more sensitive to cold. To be salvaged from it, it was necessary to think up something.

“To fight against cold, we invented more reliable clothes. 30 000 years ago, when the strong cold snap came, we had a benefit” — Gilligan says.

Archeological finds demonstrate that people owned rather perfect manufacturing techniques of clothes. By that moment we already invented the special cutting tools, including knives, and later and needles.

With their help skins could be cut on rectangles and squares, and then to fasten among themselves.

Neanderthal men had no devices, except scrapers. In 2007 Gilligan assumed that it and led to their disappearance as in the coldest times of the last Ice Age they were left without high-quality clothes.

“When the climate sharply changed, they could disappear just because weren’t able to make difficult articles of clothing, unlike the people of modern type who mastered this craft in Africa” — Gilligan says.

People of modern type had more difficult tools and clothes, however Neanderthal men weren’t unreasonable savages at all as was considered earlier.

There are no reasons to consider that their I.Q. was lower than ours. Possibly, they just didn’t feel the need for covering all body and when circumstances changed, they lacked the corresponding abilities.

However in that, as for manufacture of skins, to us was to what to learn from Neanderthal men.

In 2013 the group of scientists led by Mari Soressi from the Leiden university (Netherlands) found out that Neanderthal men the first began to use devices from a bone, but not from a stone, about 40-60 thousand years ago.

As “polished” these tools nowadays known, were made of fragments of edges of deer and were applied to finishing of skin to make it softer and to use as clothes.

“This type of bone tools was very widespread in the upper paleolith and therefore they are often found on parking of the people of modern type belonging to the period after extinction of Neanderthal men” — says Soressi.

“Personally I consider that it can be the first proof that people of modern type adopted any technologies at Neanderthal men”.

Secrets of Neanderthal men on survival in a frigid climate could be very useful to people of modern type. They could expand the set of tools at the expense of bone devices and thanks to it to enhance the clothes.

If this is so, arises a question: why then Neanderthal men didn’t copy more difficult tools of modern people? Perhaps, people of modern type just found bone tools, but never faced Neanderthal men.

A bit later, about 30 thousand years ago, the clothes of the Stone Age became even more difficult.

On the place of parking of people in Dzudzuan’s cave in Georgia scientists send multi-colored linen fibers. They could be used for tailoring of various flowers.

It means that the clothes not only were used in the utilitarian purposes, but also served as ornament. In other words, it began to perform function of a symbol.

Gilligan notes that people probably decorated themselves long before emergence of clothes. “The modern hunters and collectors who aren’t using clothes brightly paint the bodies to decorate themselves. For this purpose they don’t need clothes”.

There are certificates of the fact that Neanderthal men also painted the bodies with a pigment of red ochre. The earliest finds specifying it belong at the right time which we are separated by 200 thousand years.

Undoubtedly, this pigment could be also used for coloring of skins, for funeral rituals or for rock painting.

When it became too cold to show the painted body, ancient people had to cover it.

“The clothes began to perform this decorative function — Gilligan assumes. — As soon as it occurred, the clothes became necessary for people for the social purposes and not just to be warmed”.

It is possible for this reason wearing clothes became an integral part of life of many people.

Similarly, its absence serves as important aspect of identity for many tribes of hunters and collectors, as well as for the above-mentioned “naked tramp”.

Thus, the truth about clothes it was much more difficult, than it could be provided. Without it we could not survive, but today it is necessary not just to warm us.

The clothes became a part of the identity of the person, a part of our culture and social norms. According to Gilligan, the clothes distinguish us from other types and by nature in general.

Moreover, designating our belonging to a certain social or political group, she helps us to differ from each other.