People lived side by side with the “hobbits” on Flores island 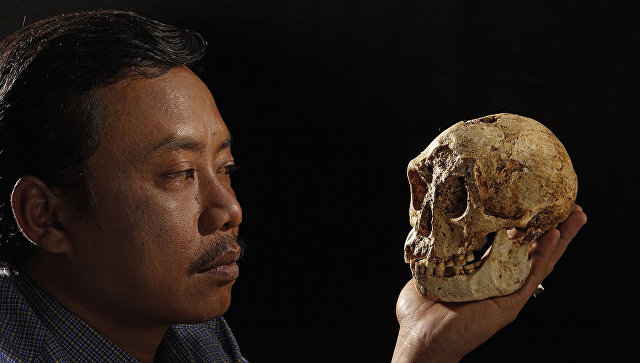 Paleontologists have found human hearth in the cave of the hobbits” on Flores island, which suggests the possibility of coexistence of hobbits and humans 50 thousand years ago.

“Recently we learned that the hobbits had disappeared from the face of the Earth about 50 thousand years ago, and that the first modern humans appeared in Australia and South-East Asia about 50 thousand years ago. Our discovery narrows the time gap between the existence of “hobbits” Liang Bua and its colonization of modern humans,” said Michael Morley Michael Morley of the University of Wollongong (Australia).

Remains of ancient the height in meters, which the press almost immediately called “hobbits” have been found in the cave of Liang Bua on the Indonesian island of Flores in 2003, and presented to the public in October 2004, a team of paleontologists, under the leadership of Michael Morwood, which included Morley.

Morwood and his colleagues announced their discovery of a new species, named Homo floresiensis. Initially, paleontologists believed that floressence people were descendants of Homo erectus (Homo erectus). Thanks to the phenomenon called “island dwarfism” over millions of years of isolation these ancient people gradually degenerated and became “hobbit”, whose brain was three times smaller than modern Homo sapiens.

The lack of new fossils has led many scientists to believe that hobbits were ordinary people who have become dwarfs due to congenital deformities. Only recently, scientists have presented convincing evidence that “hobbits” were a separate species of people who appeared on the island of Flores at least 700 thousand years ago and disappeared about 50 thousand years ago, long before, as previously thought, before the arrival of man in Indonesia.

Morley and his colleagues found traces of what in fact people could settle in Liang Bua almost immediately after the extinction of the “hobbits” or even before this event, studying the top layer of sediment at its bottom. Scientists are especially interested in the layers that were formed in the period between 46 and 20 thousand years ago, at a time when in the cave, presumably no one lived.

Unexpectedly, the team Morley found in these sedimentary rocks tracks from a few of the areas that the inhabitants of Liang Bua could be used for cooking and heating in the interval between 50 and 20 thousand years ago. This radically changed the picture.

The fact that “the hobbit”, as scientists believe today and as shown by the data of the excavations in Liang Bua where the Homo floresiensis lived at least 130 thousand years, did not know how to make fire and use it. This means that 50-46 thousand years ago in the cave of Liang Bua were already living modern humans, Homo sapiens.

What this means in the context of a possible interaction of hobbits and modern humans? This discovery, as the scientists write, in principle, allows us to think about what the first CRO-magnons may have had contact with hobbits” during the colonization of Indonesia in the cave of Liang Bua and other parts of the island.

Of course, we can’t say for sure – for the proof of such allegations paleontologists have to find clear evidence that people got on Flores before the “hobbits” had died out, and show that they really interacted with each other. However, do talk about the possibility of neighborhood “big people” and “hobbits” have now become a reality, concludes Morley.