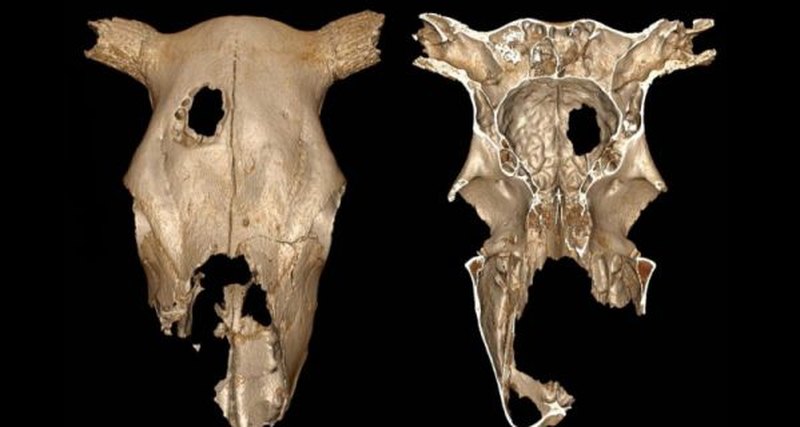 On the skull of a cow found in the Stone Age park in France, scientists found signs of trepanation; perhaps in this way ancient people treated the animal itself or trained to carry out this complex operation, then to make it on the person.

People of the Stone Age knew how to make trepanation of the skull; around 1500 human skulls of the Neolithic age with traces of this surgical operation have been found around the world. On some turtles, there are signs of healing of the opening – which means that at least a part of the patients survived the operation even in the Stone Age.

Scientists are invariably surprised by the accuracy of the movements of the Neolithic “surgeons” who, with the help of stone tools, were able to cut a small hole in the solid bone of the skull without damaging the brain and splitting the skull. This accuracy can only be achieved by practice, but until now it was not known how people with stone scalpels were preparing for trepanation. Perhaps they trained on the skulls of the dead, but it’s risky: learning from the dead head, it’s impossible to know which movements are dangerous for the living. Such skills can be practiced on animals, but archaeologists have not yet found evidence of such exercises: on the Neolithic monuments, the whole skulls of animals are rarely found – they were most likely broken up to reach the nourishing brain; The holes on the fragments of animal bones, even very neat, do not allow us to establish whether they were made during trepanation or posthumously.

In 1991, on the Neolithic campus of a reasonable Shamp-Duran man in France, almost a whole cow skull with a round hole in the forehead, dated 3400-3000 years BC, was found. Archaeologists have decided that the hole is the result of a collision with the horn of another cow, and did not linger on the find for a long time. But last year two anthropologists turned to her, Fernando Ramirez Rozzi and Alain Froment. They made a 3D model of the cow skull from Shamp-Duran using X-ray images, and examined the hole with a scanning electron microscope, a very powerful tool that makes it possible to distinguish between surface details and near-surface layers of material several tens of nanometers in size.

Scientists did not find any cracks, no signs that the skull of the cow crumbled under the impact that left the hole; its edges turned out to be very even and sharp. Rossi and Froman came to the conclusion that a strong blow could not have caused the hole to appear: it was done by carefully drilling, carving or scraping, without much effort. Probably, the hole in the cow’s skull is a trace of trepanation, they concluded.

Despite the absence of cracks, the animal apparently did not survive long after the operation: radiological examination showed no signs of healing. The cow could die during the operation or soon after it; It is impossible to establish the cause of the death of an animal after five thousand years. But the skull of Shapm-Duran is the first proof that people of the Stone Age have been tapping the skulls of domestic animals, Rossi and Froman write in an article published in Scientific Reports. This operation could be an attempt to save the animal’s life – and then this is the first evidence of veterinary trepanation in the Stone Age. It is also possible that a “surgeon” was practiced on a cow who treated people in this way.

Recently, European archaeologists discovered a medieval female burial. The woman whose remains were lying in it, survived the trepanation of the skull, died in the last months of pregnancy; already in the grave her body pushed the fruit out.