Poets have the gift of prophecy 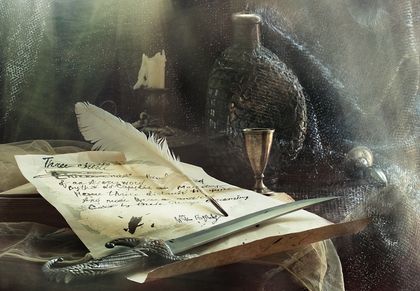 That the poets possess the gift of prophecy, known from ancient times. They are able to anticipate the fate of other people and their own fate, in particular, the time and circumstances of departure from this world. Poets can in his poems predict wars, revolutions, natural disasters.

How do they do it? What higher power dictates it’s prophetic lines? In this respect there is a lot of scientific and pseudo-scientific theories. But a consensus scientists have come so far.

“How our word will respond…”

In the nature of the prophetic properties of poetry trying to understand a variety of specialists: philosophers, literary scholars, neuroscientists, futurists… So, Russian parapsychologist Ilya Vasilyev believes that at the moment of greatest emotional creative tension, called inspiration, the poet goes on a direct connection with the energy-informational field of the Earth, great planetary and cosmic forces.

In this mighty timeless flow of the Creator intuitively draws on information about the past and about the future of humanity. The information obtained is enveloped in poetic lines, and the poet himself often can not clearly explain why he wrote that way.

Poets and prophets have all peoples. Reflecting on the nature of their work, the Swiss psychiatrist Carl Gustav Jung determined that these geniuses have the gift to Express the universal unconscious knowledge. Plunging into the depths of this collective unconscious, they draw out the information that is available to everyone, but on a subconscious level.

That is, the poets only louder and more clearly Express something that everyone knows. (Perhaps that occurs in our empathy with the feelings and thoughts of the author, even to the extent that we think that we might just as well say?!) Jung noted that some literary prophecy remarkably coincide with the laws of humanity.

But the most profound and immediate impact on readers have those books, the creators had managed to raise the level of consciousness and to Express “the surface layer of the collective unconscious”.

We can not predict,
How our word will respond…

Said Fyodor Tyutchev in the nineteenth century. But it is still unclear, whether poets possess psychic abilities, whether self-printed or the spoken word affects the future. However, at all times, in the apt words of Yevgeny Yevtushenko, “a Poet in Russia is more than a poet”. He is not just stikeleather, and prophet called “the verb to burn the hearts of the people.”

Lermontov, a descendant of Learmonth

Nearly a century before the worst tragedy in the history of our country Mikhail Lermontov wrote:

There will be a year of Russia of the black,
When kings crown will fall;
Forget the mobile to him former love,
And the food of many will be death and blood;
When children, when innocent wives
Overthrown will not protect the law…

This Epiphany happened long before the murder of the Russian Emperor and his family, the horrors of Civil war and mass repression.

Foresaw the poet and his own death. The poem “Dream” begins:

This dream proved to be prophetic: in less than a year Lermontov was killed in a duel in Pyatigorsk.

Contemporaries of the poet suggests that he had a premonition of his death, talked a lot about her before leaving for the Caucasus. Lermontov as if drawn to death, wanted her. What supernatural force caused him to collapse in Pyatigorsk instead of move to your destination in Polk?

When his companion Alexei Stolypin tried to resist the urge of the poet to change the route, Lermontov proposed to cast lots and was happy as a kid when we won. And in Pyatigorsk it is so determined, were harassed and bullied his former classmate Nikolai Martynov, there’s no doubt that the poet was consciously seeking his death.

Rock rested upon him and with his father’s and mother’s side. Grandfather Lermontov, Mikhail Arsenyev, not waiting for new year’s eve mistress, drank a glass of “something” and died. The grandmother of the poet Elizabeth Arseniev were found in the liking of grandchild a striking resemblance with his grandfather.

Father, Yuri Petrovich, after his wife’s death, which was to blame, took to drink and died 44 years old. And about the poet the midwife who delivered his mother said, for some known only to her the signs that this boy will not die a natural death.

And prophetic gift of Mikhail Lermontov, and his ancestral karma understandable, if, indeed, his ancestor is the legendary poet, singer, musician and visionary of the second half of the XIII century, Thomas Learmonth nicknamed the Poet.

He lived in the South-East of Scotland and became famous when king Alexander III as a consummate bard and soothsayer. His predictions, many of which turned, reached our days.

There is a beautiful legend that the gift of prophecy, Thomas was awarded the Queen of the elves, his love for his loyal service to her for seven years. All this time, being in Liflandii, he was silent, but after returning to the human world all that he said his mouth was pure truth. And when it came time to leave this world, Thomas returned to his Queen.

All is good, but not everyone liked the prophecies of Thomas. He once predicted graph Guimenu, who called him a liar that he will fall off his horse, broke his neck and dogs will gnaw his bones. This was soon accomplished. But one of the approximate graph, the mighty sorcerer, cursed the line of Learmonth. And through six centuries the curse has caught up with Michael.

“I live for the last time

Anna Akhmatova foresaw not only his earthly but also the posthumous fate. “But I warn you, That I live in,” she wrote.

This brilliant insight is fully consistent with the theory advanced by the Danish philosopher and parapsychologist Frederic Bernstam. He believes that the spirits of the dead hold on Earth our memory, our perceptions of them.

Remembering deceased family member, getting acquainted with the life, deeds and works of famous people in history classes, literature and other school subjects, reading books, watching movies, taking the “cultural” conversation, we would like to resurrect them from oblivion, attracts, and thus do not give to prepare for a new incarnation.

Energy essence, immortal component that is called soul is doomed to wander in our world (and possibly in other worlds) until then, until you forget the name of him in whose body she was in her last incarnation.

If we are talking about an ordinary person, which knows and remembers a limited circle of friends, acquaintances, relatives two or three generations, this period of wandering in the way of the spirit will be relatively short – a maximum of one and a half centuries. But if you’re famous, if you put his name in the history of mankind – to be your spirit until the end of time, or till the end of our civilization. This is the fee for glory.

In life many believed Anna Akhmatova clairvoyant. Osip Mandelstam even called her Cassandra. In one of her poems has the following lines:

I predicted the death of sweet
And died one after the other.
Oh, Woe is me! These graves
Predicted my word.

In 1921, in the train Akhmatova wrote a poem, “you’re Not gonna be alive…”. After a few days was shot by her husband, the poet Nikolai Gumilev. Then some things came up over her, Akhmatova was afraid to write, because he knew that the word material, the word is action.

Remarkably accurately predicted the death of Nikolai Rubtsov. “I will die in the Epiphany frosts…” – he wrote in his “Elegy”. And so it happened. In 1969 he began an affair with the poetess Lyudmyla Darbenai. Both were creative people with a very difficult character.

Their relationship has evolved nervously, erratically. They then converged, then diverged. And yet them attracted to each other, some kind of irresistible force. As it turned out – dark, evil. In the night of January 19, that is, in Baptism, the lovers broke a drunken quarrel, in which derbina strangled Rubtsov.

In General, the Scars were very nervous person. His fellow students at the Literary Institute named after M. Gorky told me that one day Nicholas decided to tell fortunes on the fate of a very unusual way. He brought to the Dorm pack black carbon paper, folded from sheets of airplanes and began to launch them into the window one after another, calling the names of their comrades.

First, flew several meters and slowly sat down on a snow-covered alley. And when the Scars started my airplane, it picked up a sudden gust of wind, threw up, and then flung to the ground. After that Nikolai the whole week went gloomy and depressed. It is evident, from the fate not go away.