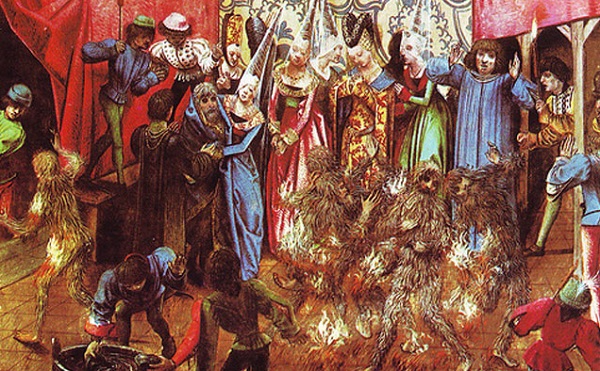 At the age of twelve he became king of France, and at twenty-four, he showed clear signs of insanity. His reign led the country to a double crisis. On the one hand – Hundred Years War with England, on the other – a ruler who has died from his mind.

Despite the fact that in his youth Charles VI was described as kind, energetic and generous, in adulthood he was firmly entrenched with the nickname of the Mad. The reason for this was the mental disorder of the king. Every year the disease progressed, and moments of enlightenment became less frequent. Outbreaks of inadequate behavior subsequently made him only the de facto ruler of France. The real power was concentrated in the hands of the wife of the king and his brother – Louis of Orleans. Later in the struggle for power came the Burgundians, which led to the confrontation of Armagnacs and Bourgians.

The first serious attack of illness overtook Charles VI at twenty-four years. Not really recovering from the fever, which was accompanied by a long fever, he went on a campaign. There he suddenly rushed with a sword at the nearest soldiers. Before he was tied up, he managed to kill five knights.

The increased irritability of the king, the excitement, the painful sensitivity to sounds – all this alarmed the court physicians. Michel Pentois (monk-chronicler), who followed Karl during the campaign wrote: “The king, as if not in his right mind, uttered insane words, and between them made gestures, indecent for royal dignity.”

After this attack, the king was in a state of unconsciousness. He practically did not move, he could not recognize anyone, but speech was completely incoherent. After a while the king began to recover, but refused to conduct state affairs. He entrusted his power to his uncles, who almost completely plundered the royal treasury. The king himself preferred to have fun, playing tennis and hunting ducks.

A year after the incident on the campaign, Charles VI had to go through an event that went down in history under the name of “Ball enveloped in flames.” At the feast, organized by the queen, there was to play a comic performance. Participants in this show were six young aristocrats, including the king. It is interesting that they were dressed in clothes of savages, sewn from linen cloth, impregnated with tar. This allowed an unexpected spark from the torch, which fell on one of the dancers, to instantly ignite the suit.

As a result of the rapid spread of fire from burns, four disguised people were killed. The incident caused the King’s psyche an indelible trauma. Literally six months later, Karl became aggressive, denied his involvement in the royal family and furiously erased the image of the royal coat of arms from the tableware. He did not recognize his wife at all.

After some time, the king’s condition returned to normal. As a token of gratitude to God for his recovery, he made a pilgrimage to Mount Saint Michel and ordered the founding of a chapel there.

Two years later, in 1395, the king had another cloud of reason. He demoted and drove his doctor and, in an agitated state, until exhausted, rushed about the palace of St. Paul, shouting that he was fleeing from his enemies. He again denied that he belonged to the royal dynasty and tried to destroy the images of his coat of arms.

In attempts to cure the king resorted even to the services of sorcerers. Without success, they came to the conclusion that Charles VI is obsessed with evil spirits. For two years, using magic spells and a certain tincture, the demons cast out of the king. Nothing helped, and the mages were sent to execution.

Despite all possible ways of treatment, seizures were systematically continued. Charles VI, already sensing their approach, asked that he and all the courtiers be taken out with knives.

In the intervals of clear consciousness, which with time became less, he tried to conduct public affairs. The king was in talks and even in 1412 led a military campaign against the Bourgignons who had sided with the British.

But sometimes the king’s behavior became completely unmanageable. Once he fancied that he was glass. Karl was completely convinced, if they touched him, he would break. And so the king did not allow himself to touch, inserted iron rods into his clothes and in every way defended his person. For the same reason, Charles VI refused for several months to wash, shave and change his underwear. As a result – skin disease and lice.

Lost hope of court doctors had to resort to “extreme psychotherapy” with the help of a strong fright. To implement the plan, a group of people with black faces, “under the devil,” secretly led to the palace. The action had a certain effect – the king agreed to be washed and dressed.

In 1417 he ordered his wife to dissolve her entire yard, and then expelled the courtiers. The reason for this decision was the behavior of one of the Queen’s maid of honor. According to the king, she behaved inappropriately. Her place was taken by Odette de Shamdiver, the daughter of a horse merchant, who performed under the king both the role of a nurse and a mistress.

At the end of his life, Charles VI suffered several attacks of malaria. During the second, in 1422, the king suddenly died.