Prehistoric engravings which are 14000 years old 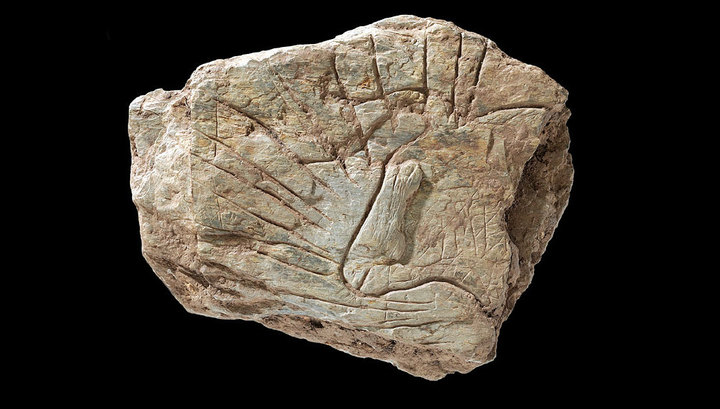 French archaeologists told of the startling discovery that they had to hide for many years. The beginning of this story was laid by a hurricane that swept over the French region of Brittany in 1987. The wind tore the pine from the summit of the Empress Rock – a 50-meter cliff on the outskirts of the Breton city of Plougastel-Daoulas on the Atlantic coast of France. When inspecting the damage, in the pit left from the dead tree, experts discovered an interesting archaeological material.

The scientists explain their silence simply: the place of excavations had to be protected from black diggers and idle talkers. Only now archaeologists have published the first results of the research and have uncovered some details, including the location of the find.

Excavation began, stretching for years – the cliff rises on a tree-clad bank, so the use of modern technology was impossible, everything had to be done in the old-fashioned way, manually. 26 years later, in the summer of 2013, the researchers reached the foot of the Empress Rocks, where they found a small cave – a sort of grotto, a shelter under a rock. From there archaeologists led by Nicolas Naudinot extracted many Paleolithic artifacts – flint arrowheads, stone knives, scrapers … Since 2013, there have already been 4650 such objects. All of them are of interest to science, but only 45 of them became an absolute sensation.

We are talking about artifacts, which archaeologists called “prehistoric engravings”: they are 45 shale plates with images of animals – horses and bisons. The age of “engravings”, scratched in soft stone, painted or tinted with coal, is more than 14,000 years old.

Unlike the large-scale “canvases” of prehistoric artists on the walls of such caves as Lasko (France), Altamira (Spain) or Shulgan-Tash (Russia), slate engravings from Plougastel are very small: 29 of them are less than five centimeters in length, 14 are smaller 10 cm in length, and only two rather large, almost 30 cm, with perfectly preserved images on both sides of the stone – these are mirror portraits of horses and bisons.

“We were completely amazed by the beauty of these drawings and the amazing skill of the artist. The details are drawn very skillfully – in the images of horses, for example, the hooves, the mane standing next to the colt are easily discernible … The drawings are very lively and talking, “- told Nicolas Nodino to the French edition of Le Figaro.

Archaeologists remember how, after discovering the first engravings in 2013, they had to lay aside the shovels so as not to damage the fragile slate accidentally, and to switch to the most delicate tools – scrapers, garden sovochki, brushes … And also the researchers obtained from the regional authorities complete protection of the Empress’s Rock from strangers .

All these measures slowed the process of excavation, but the discovery was worth it. Engravings from Plougastel are the oldest works of art found in Brittany, but they can not be called a discovery of local significance. Such images, especially given their age, are extremely rare in Europe. One of them – the head of a bison, surrounded by rays – is absolutely unique: such a symbolism has never before been encountered by a scientist. However, speaking of age, archaeologists have in mind not only the antiquity of slate engravings: the same drawings from the already mentioned famous caves for a couple of millennia older than engravings from Plougastel. This is the case in the period to which they include scientists.

“For French and European archeology, these engravings are of great value, since they refer to a transition period, previously unknown to researchers. This is a transition from the figurative art of the Madeleine culture to the much more schematic and geometric art of the Azilean culture, “explains Nodino.

Perhaps, to explain the scientist is to add a few more obscure words, to more clearly explain the historical value of the find. One such word is Allerod, or Allerodskoe warming, the climatic period according to the classification of Blitt-Sernander. Approximately 14,500 years ago, the climate of Europe has become warm and humid, and after the allergy on the continent it has cooled again. Even in our time, we are experiencing the effects of global warming, but in prehistoric times, with the change of climate, everything changed, including the social organization of people and such subtle matter as art.

Until now, it was believed that the Allerod warming put an end to the Madeleine culture with its exquisite and very realistic graphic style. The very name of the era, the Madonna, dates back to the cave of La Madelaine in the south of France, where beautiful prehistoric drawings and scratched images of people and animals were discovered in the 19th century.

In his scientific work published in the American edition of PLOS, French archaeologists give several examples of “engravings” of the Madeleine era, in addition to the well-known drawings from the caves of Lasko and Altamira.

Obviously, such an artistic level, the degree of detail of images and their realism presuppose not only talent, but also the presence of very advanced skills in stone processing and tool ownership. According to scientists, this can mean that the engravings and drawings were performed by “professionals” who received their skills not by a fluke, but, probably, received special training.

Allergic warming and severe changes in the way of life of ancient Europeans are also reflected in art. In place of the Madeleine came the so-called Azilean culture, which originated in Europe about 14,000 years ago. According to French scholars, “one of the elements of rapid social restructuring was the rejection of naturalistic and figurative images on objects and walls of caves in favor of abstract ornaments on small stones.”

In the Azilian era, images of people and animals disappear, they are replaced by “small forms” and geometric abstract drawings. This moment is considered the key in the chronology of the Paleolithic, and it affects not only the fine arts. Researchers associate the change of style with the loss of necessary skills, simplification of tools, “the dissolution of high standards of work with a stone.” This is especially noticeable in the art of the late Azilean culture – it is not about artistic preferences, they say, realism was better than abstraction, but about technologies of working with stone and bone: a factor that can be assessed objectively. In general, this indicates a major change in the lives of the people of the Azil era and the difficulties they have had to face in order to survive in a new climate and new landscapes.

In this context, the words of archaeologist Nicolas Nodino about the “transition period, previously unknown to researchers” make sense: the date of engravings from Plougastel refers them to the Azilean culture (14000-14500 years ago, Allerod has already arrived), whereas the image style is to the Madeleine.

The scientists offered their explanation for the data obtained: the “Madeleine” skills of working with stone, which required preliminary training, degraded faster than the realistic stylistics of images common in the Madeleine era. Allerod warming “killed” professionals from art and the symbols they developed, but it did not happen right away.

However, until now nothing has indicated that the transition was long and gradual – perhaps, scientists acknowledge, this is due to the insufficient number of finds of the desired period. Shale engravings from the grotto under the Empress Rock are in fact the first proof of the existence of a transitional stage: the “agony” of art and technology of the Madeleine culture lasted longer than was commonly believed.

The dating of the items found in Plougastel, for the avoidance of doubt, scientists have identified and confirmed in many ways. The soil in this region of France is highly acidic, so that organic materials remain extremely poor. Archaeologists are used to dealing mainly with stone artifacts and possess the necessary skills and equipment for their study. In this case, scientists analyzed the way of processing stone tools found near the engravings. A few characteristic signs indicate that they were made in the era of early Azilian culture.

This conclusion is confirmed by radiocarbon dating: three samples pointed to the climatic periods of Bölling and Alleröd / Bölling – both refer to the era of global warming, which occurred in 12000-12500 BC.

Images on shale engravings, however, have all the hallmarks of the “Madeleine school”. The theme of horses and bisons is very characteristic of the Paleolithic. A lone horse from engraving 741 (side A, photo is presented above) gives out the artist’s love for detail and the ability to convey it: for example, the texture of the fur and even the volumes of the animal are recreated with the help of fine shading throughout the body, while the mane is represented by strokes of a different length. Even more interesting is the reverse side of engraving No. 741: here two adult specimens are depicted in mirror image and, probably, a foal hidden under the belly of the mother.

All images are solid, well-traced, all proportions are met, as is the perspective – this is especially noticeable on paired details, such as the legs and ears. This suggests that the artist tried to maximally reflect the reality from the point of view of the observer.

The details have been worked out so thoroughly that scientists could not help but pay attention to such oddity as the lack of horses’ eyes. The researchers have not found a suitable explanation yet – on the other engravings of the Madeleine culture with the horses’ eyes everything is in order.

Recall that at that time wild horses were an object of hunting, before domestication was still very far away. However, the images show not only food interest in these animals – horses, like bison, were objects of worship and admiration.

In this regard, a separate sensation was a two-sided engraving depicting the head of a bison surrounded by rays. 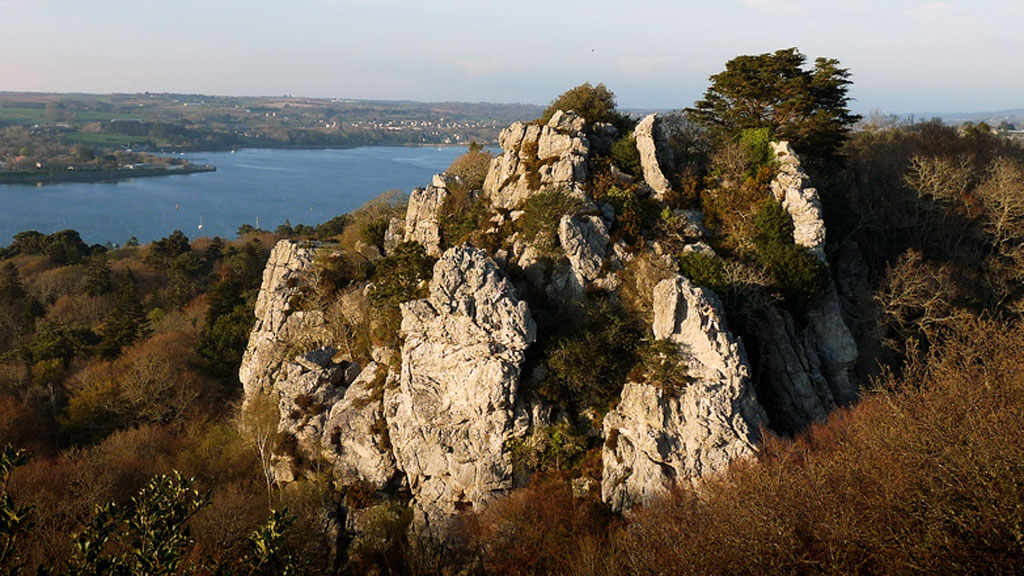 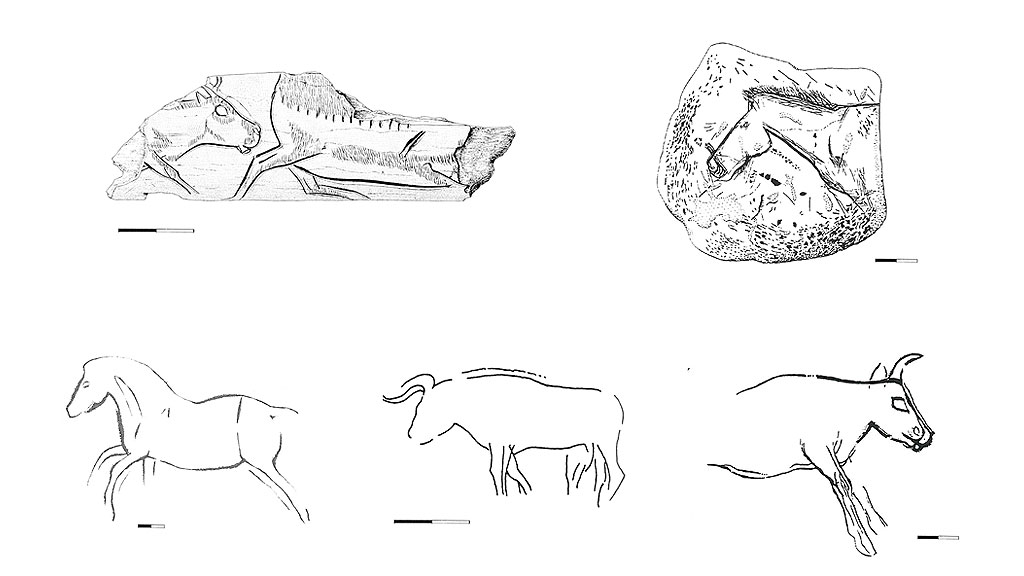 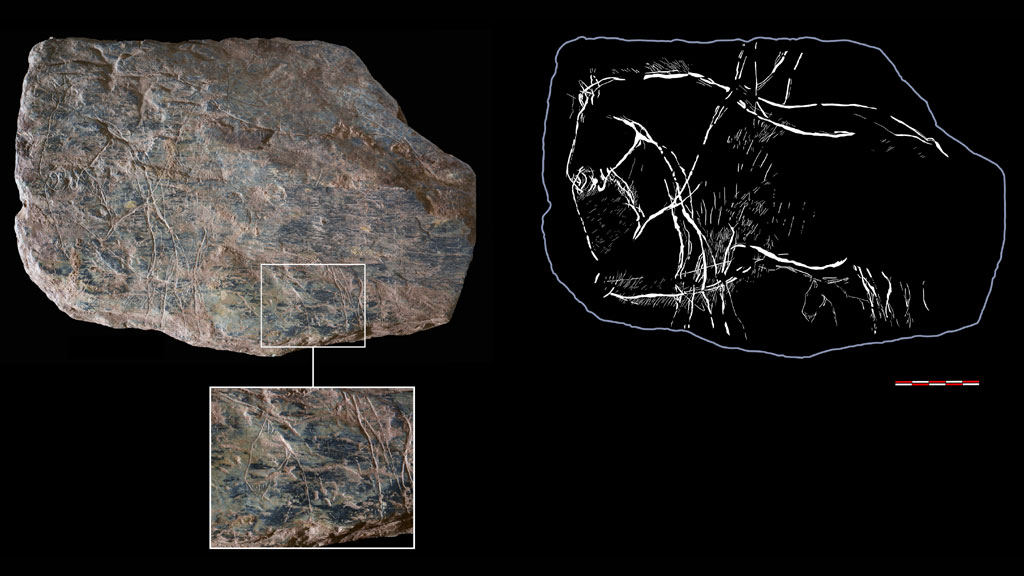 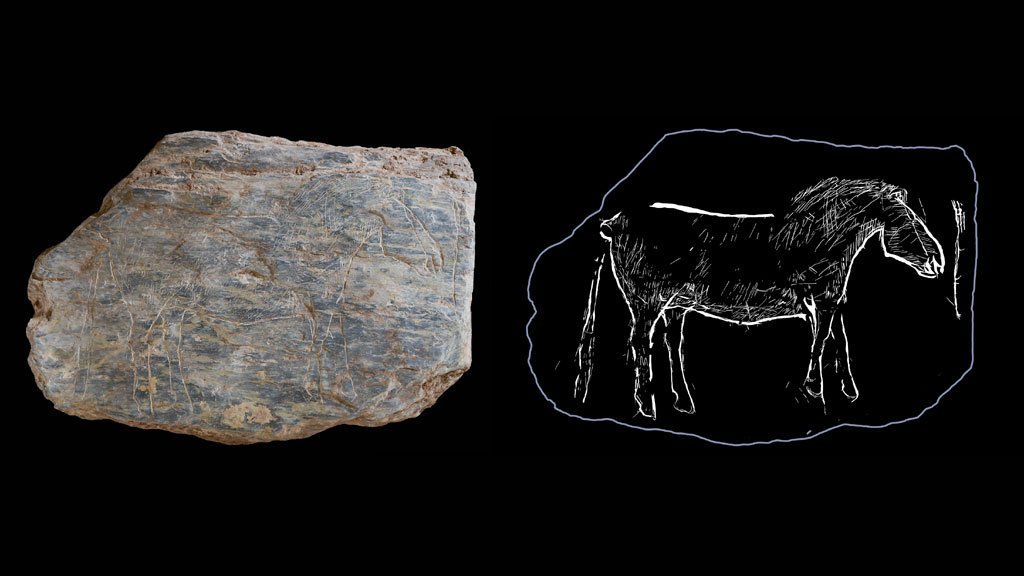 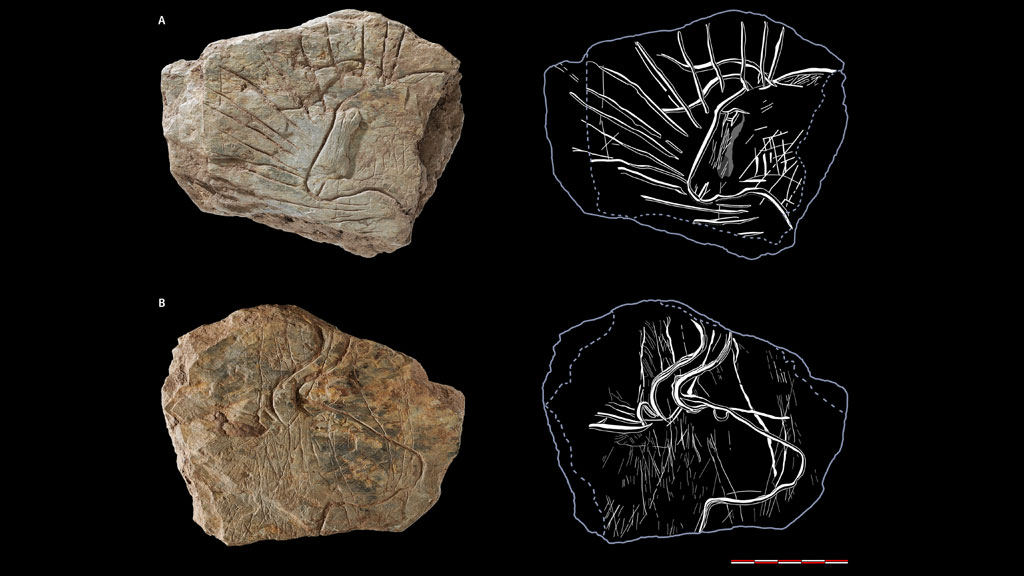 “Engraving with a” shining bison “is unique. This combination – a realistic figure of the animal and a schematic image of aurora, halo, – is the first time in the prehistoric art of Europe. We can only assume that this image was of profound symbolic significance, “- says Nicolas Nodino.

According to the researchers, carefully cut in the stone rays, complementing the head of the bison with powerful horns, point to the special, even sacral value of bison for the ancient inhabitants of Brittany. Analysis by a non-invasive method of Raman spectroscopy revealed excessive evidence in favor of this theory. “Shining bull” is not a simple engraving: the ancient master, for the sake of enhancing the visual effect, tinted the contours of the black pigment scraped in the stone. The chemical trace of this pigment was found by the spectrometer.

The people who left thousands of stone artifacts under the Empress Rock and adorable engravings were hunters. Most (42%) of the processed stones found in the grotto are retouched, while archaeologists have discovered only one nucleus (a semi-finished stone for further splitting and production of stone tools). Scientists concluded that in the shelter under the rock people came with their “preparations”, created in place small batches of the necessary weapons, and then left, carrying valuable nucleuses with them. Everything says that the shelter was not intended for living, here they would visit for a short time for special purposes. Most likely, there was a camp of hunters here.

“We believe that the grotto served as a temporary haven for small groups of hunters, from 2 to 10 people. At that time the sea was not in the immediate vicinity of the Rock of the Empress, but 50 kilometers from it, “- says Nicolas Nodino.

It took a hurricane and 30 years of research, so that a lonely cliff on the coast of Brittany began to talk about its prehistoric past. Excavations at the Rock of the Empress (incidentally, named after Napoleon III’s wife, if anyone is interested) are far from over – they will resume this summer. But, even if nothing else is found here, European archeology has already received rich material for reflection and admiration.