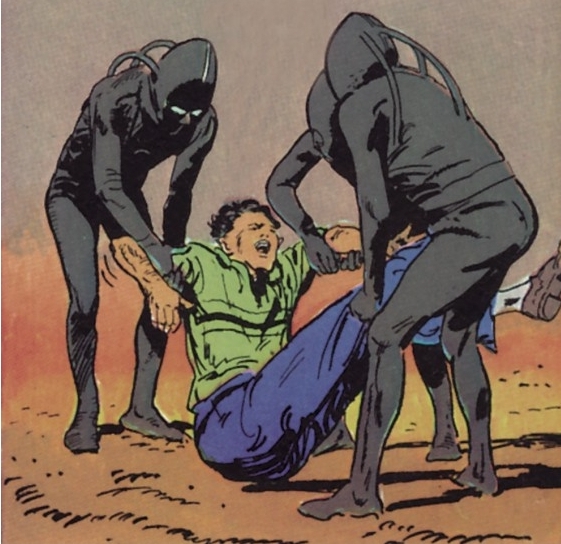 The story of the kidnapping of a Brazilian farmer was first introduced to the English-speaking world in the magazine review of the flying saucers” in 1965. It was based on the message of Dr Walter Buhler from Rio de Janeiro, who interviewed this man in 1961. Bachler has provided the editor Gordon Creighton a copy of the statement of a man and a medical report compiled by a doctor Olavo Fontes. These documents are dated 22 Feb.

Antonio villas Boas was usually engaged in farming on the family farm near the town of Francisco de Sayles.

He was half American, half Portuguese. By the age of 23 this guy had only primary education, but increases its correspondence courses. Later he was evaluated as a fairly reasonable person.

The night of October 5th, 1957 at the home held a family celebration, then, Antonio and his brother Joao, with whom he lived in one room, go to sleep: it was about 23 hours. Antonio opened the window, because the night was very sultry, and then he saw that the whole yard bathed in a silvery glow. At first the brothers did not pay attention to it, but in the end curiosity overcame Antonio, and he again went to the window.

According to his observation, the light moved in the direction to their house. He slammed the shutters and woke my brother. Young people began to see the light that penetrated through the wooden planks and moving on the roof. After nine days, between 21.30 and 22 hours, the brothers worked in the fields on a tractor.

Suddenly they were struck by an intense bright red light at the North end of the field, the source of which was located at an altitude of about 300 feet above the ground. Jiao stayed in the place while Antonio went on the tractor to the lit area. When he approached closer, the light then moved to the southern part of the field.

Antonio followed him and there, but the glow quickly moved to the original position. So they “played hide-and-seek” twenty times. Charter, Antonio gave up and went back to jao. The light still had some time over the field, occasionally pulsating. 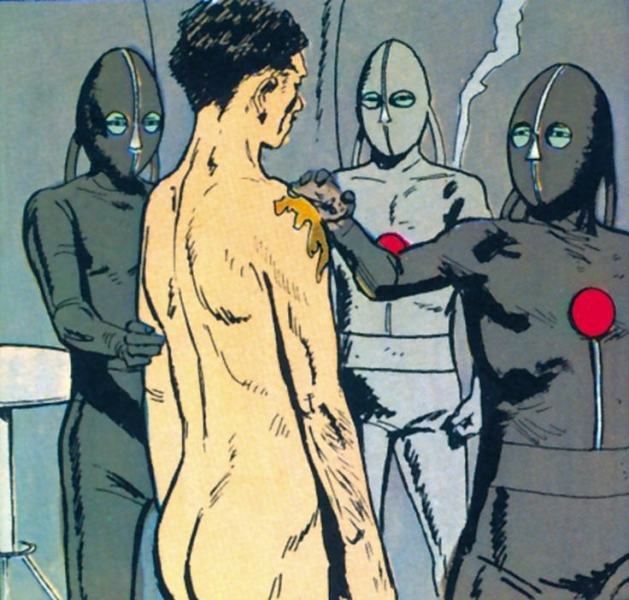 The next night Antonio was working on a tractor one. At exactly one o’clock he saw in the sky a large red “star”. Suddenly the light became more intense and suddenly rushed down towards the young man. A moment later the object appeared right above him, emitting a bright light that engulf the lights of the tractor. It was all red “headlight” mounted in the front of the ship.

The farmer thought about how to escape, but really realize that the speed of the tractor will not allow him to do it. To escape viscous dug at the ground also does not succeed. While he is in fear thinking about all of this, the ship dropped and were now several feet off the ground. The farmer could now see it in detail.

“I distinctly saw the shape of the aircraft, which resembled a large elongated egg with three metal spurs in front (the one in the middle and one on each side). There were also three metal rod, thick at the base and acuminate at the ends. I couldn’t discern their color, as everything was shrouded in a bright reddish glow…”

On top of the machine something was rotating at high speed and also emitted a strong fluorescent reddish light. In that moment, when the ship slowed for landing, the light got a greenish tint, which corresponds, in my opinion, reducing the speed of rotation of the propeller, which took the form of a round flat dish or a flattened dome.

“Then I saw three similar to tripods metal poles appeared at the bottom of the ship as it hovered a few meters off the ground. Then I completely lost the remnants of self-control. These metal feet beyond doubt has assumed the entire weight of the unit, as soon as he landed. Since the engine of the tractor still worked, I turned it to the side, trying to get away.

But the tractor stopped after a few meters, as the engine stalled and shut off all the lights. I tried again to start the engine, but the starter showed no signs of life”.

Antonio opened the door of the tractor, jumped down and ran away. Suddenly someone grabbed his arm. In desperation, the farmer lunged, managing to bring the Stalker out of balance, but still three unidentified men picked him up and lifted into the air. These creatures were to him on shoulder.

They were dressed in gray, tight-fitting jumpsuits with helmets that obscured all the features of their faces, except for eyes that were seen through the thick lenses.

They also wore boots, gloves, three tubes ran from the back of the head to the body. Antonio tried to resist, but to no avail. It was raised aboard the ship.

Inside he found himself in a small square room, which was bright as day and which was covered by a square lamps, mounted on metal ceiling. The door was closed so tightly that he didn’t even notice the cracks in the wall where she was. One of the kidnappers told the guy to proceed to the next room.

“We left the small room and moved into a much larger, semi-oval in shape. I believe that this room was in the center of the ship, as in the middle of the floor to ceiling housed a metal column, broad at the base and at the top a little more narrow in the middle part.

It was round in cross-section and seemed very durable. The only furniture I saw was an oddly shaped table that stood against the wall and surrounded by several rotating chairs without backs. It was all made of the same white metal”. 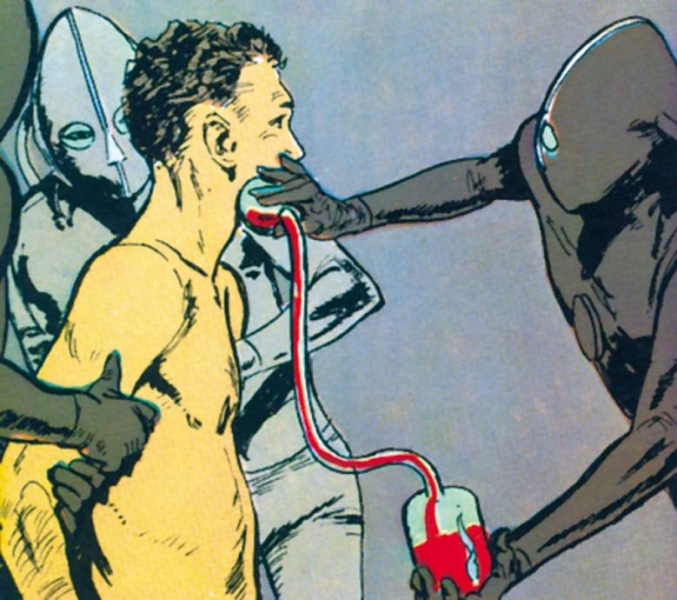 The creature looked at who was in the room of the young man, communicating among themselves in a language reminiscent of barking. Then he forcibly undressed, his body was covered with a thick, rapidly dried liquid.

Two led Antonio into another room where he through the long tube and took blood. Then left alone, and he lay down on the gray sofa to relax. Suddenly the young man felt severe nausea and I noticed that several of the tubes on one of the walls out the steam. Antonio walked to the corner, where he vomited.

Some time later, in walked a naked beautiful woman. She had blond hair and face with wide cheekbones, a pointed chin, elongated blue eyes and thin lips. The stranger had a pretty wide and big hips.

The woman walked over to Antonio and began lightly pulling at it. The farmer woke up, and twice they had sexual contact. Antonio is generally liked this episode, although he was almost spoiled when the woman suddenly began to grunt. He had an unpleasant feeling. 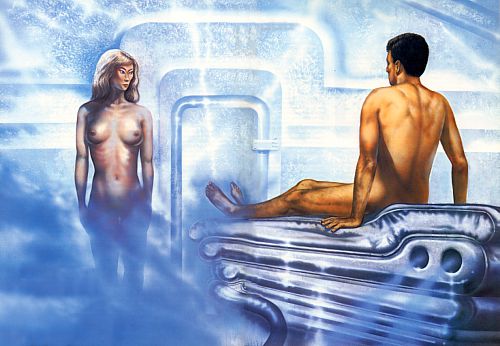 After sexual contact, the door opened and a man appeared on the threshold, ordered the person to leave the premises. “But before leaving, she turned to me with a smile, pointed at me and my stomach, then raised his eyes to the sky”.

This meant that the woman told Antonio that is going to carry and give birth to their child on his home planet. “Girl” is gone, then another creature brought Antonio clothes, and motioned him to get dressed. It was held again in the Central room, where now there were several creatures.

They are about something talking among themselves. Antonio decided to take an object resembling a watch, which would serve as proof of such an unusual adventure. But Antonio couldn’t take him because the subject he has selected.

In the end, stolen output, he was given a diagram of the ship, in which were marked certain details. Then it was back on the field, and the ship flew away. He was on Board 4 hours 15 minutes. The young man did not tell about this incident to anyone except his mother. He then contacted the journalist Joao Martinez, who wrote an article about UFOs.

THE SYMPTOMS OF RADIATION POISONING

“He does not have any psychopathic traits. Calm, fluent, without any nervous ticks or signs of emotional instability, all of his reactions to the questions were perfectly normal. He spoke strongly and did not lose control in the facts.

His behavior corresponds exactly to that which would be expected from a man who was extraordinarily strange situation. In some moments, even knowing about our doubts on certain issues and mistrust, he still answered quite clearly: “I don’t know anything about it” or “I can’t explain it.”

In your medical opinion, doctor Fontes recorded that villas Boas arrived home exhausted and slept almost the whole day. For the next two nights he couldn’t sleep and was suffering from severe headaches and nausea, leading to loss of appetite.

During the second sleepless night he felt a strong burning sensation in the eyes accompanied by lacrimation.

With the third night villas Boas began to feel increased lethargy, which lasted for months, and he wanted to sleep. On his hands and feet appeared then small sores that left scars after the treatment, and on the face — two yellowish spots.

There was a suspicion that the symptoms of radiation sickness. All the symptoms were minor, they probably should not have lead to any long-term health problems.

To these cases, as other, later incident, reacted with skepticism. After all still human experience was limited to observing from a distance, or to contacts with aliens. The case of Antonio provoked fear in people, thus emerged a new scenario in which the person became a victim, not chosen.

But this case was not a harbinger of what followed afterwards. Villas Boas clearly remembered the moment when he was taken aboard the ship, while the people abducted, in our time, suffer from “amnesia” and absolutely cannot remember even under hypnosis, how they get there.

Medical study is mentioned in most reports. In many current cases that have occurred in America, the sperm and eggs were removed from people through medical procedures, whereas Villas Boas sperm got in a natural way.

Most American researchers had assumed that the material taken is used to play hybrids to enhance an alien race that arrives in decline due to reduced genetic Fund.

In the 1960-ies, researchers have argued that female who came into contact with the Brazilian farmer, was such a hybrid. Interestingly, broad face, pointed chin and thin lips characteristic appearance modern alien creatures. However, a detailed description of the vehicle and the communication have a lot in common with the technological and sociological researches of the 1950-ies.

THE LATEST NEWS ABOUT THE VILLAS BOAS

In 1978, Antonio villas Boas broke the silence that had lasted for twenty-one years, and gave an interview to Brazilian TV. To his personal opinion, it seems, is now treated with attention, for he became a doctor by the Villas Boas, the distinguished lawyer, was married and had four children.

He admitted that he decided to speak, because it began to irritate interpretation of what happened to him in the case. He again described the incident, without any conflict, but added that during contact with the “woman” the second time she used a special vessel for collection of sperm.

Before his death (in 1992) villas Boas also stated that in 1960-ies he was invited to America “security agencies” to identify the wreckage of a UFO crash. In the future, he always declined to discuss this fact, even with his family.