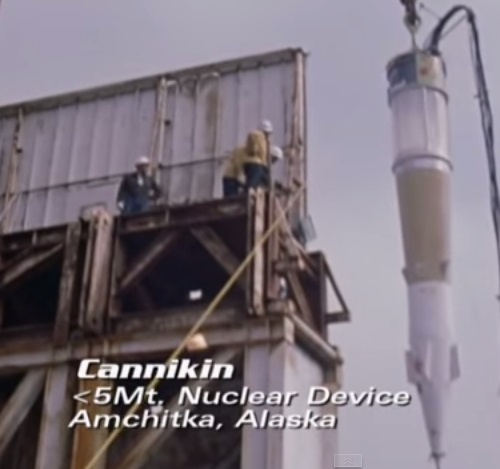 Would you like to see the epicenter of the 6.8 magnitude earthquake and what happens at that moment in the center of the earthquake? You have this opportunity. 60 years ago, the US military carried out an underground nuclear explosion, which caused an earthquake whose magnitude was 6.8 on the Richter scale.

In those years, they were afraid to conduct such a test near major cities and laid a nuclear charge in Alaska, plunging it into a 2-kilometer-deep mine and detonated a charge of 5 megatons.

Seismographs recorded an earthquake of magnitude 6.8 as a direct result of detonation. More than 1,000 aftershocks occurred after the main tremor with values ​​exceeding 4.0 which occurred within 30 days after the explosion.

The energy created by detonation caused the surface of the earth to surge to 8 meters on an area of ​​more than 3 kilometers. As a result of this man-made earthquake, rocks on the coast collapsed, marine animals near the shore – were lost.

In the lakes, streams and ponds of the island were found the remains of more than 11,000 different species of fish. 1000 sea otters were killed, their skulls broken by the force of the explosion, their eyes pressed into the crushed skulls from the shock wave. Thousands of wild ducks died a terrible death – the backs are broken, and the paws are pressed into the body.