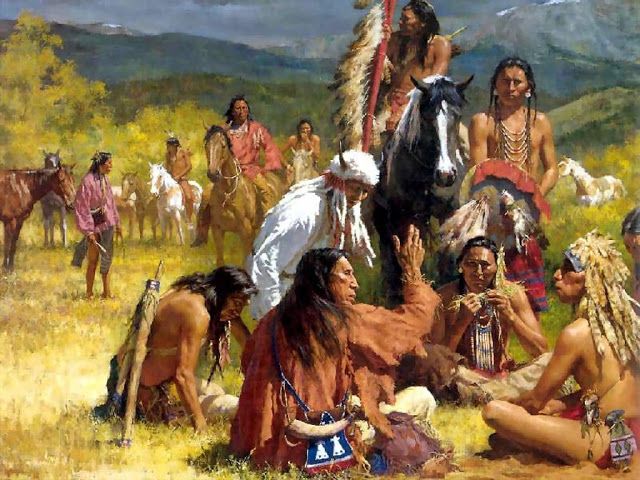 The mysterious Indian culture has always attracted the attention of Europeans. Maya, Aztec, Inca, Toltec… There is another Indian tribe, which is known not so widely, however, in recent times forces you to speak about yourself more. We are talking about the hopi tribe. And his prophecies.

The tribe that still inhabits the United States reserves and has about 6 thousand people. The hopi believe that their ancestors long ago came from the depths of the earth, where they lived in a giant underground dwellings.

After the surface of the hopi ancestors dispersed around the world and only many years later at the behest of the spirits gathered and settled in Arizona, where I live now. More than a Millennium, nothing has changed.

The tribe is divided into thirty clans, which are controlled by the elders. They simultaneously assume the position of shaman, by establishing contact with the world beyond the grave. Often elders from birth have the ability to see the future and heal sickness.

Even in the new Millennium hopi came, erecting a special structure called kawasemi, where they produce mysterious rituals to contact the spirits of the dead.

During the winter solstice the shaman goes to Chivas and there, as he says, sees the events as the future for their countrymen and for the entire planet.

In the hopi language there is no such word as time. They use only now. Every Indian understands that time is a constant energetic movement, having neither a past nor a future. All hopi know how to use the mind of their dead ancestors and, accordingly, are able to turn to them for guidance in difficult times.

Communication with representatives of the underworld takes place in small rooms dug very deep underground. In fact, all Indians have such a personal underground room, and the conversation with the souls of the dead sometimes stretched not for one day.

The maximum value for hopi Indians possess ancient blocks of stone, kept by shamans for centuries. On blocks of rest message the first Indians. As the hopi say, are there data available about the fate of the world. In addition, the most powerful shaman regularly takes a fresh message from heaven, who communicated to the President of the United States.

Individual prediction is not yet subjected to wide publicity. Experts in the field of parapsychology who are registered in the service of the White house, to understand the symbolic messages that convey to them the hopi, and trying to deflect any incipient danger.

Now attention to a tribe of hopi Indians rose to unusual heights, especially after the misfortune that took place in America on 11 September 2002, it was Found that the predictions of the hopi mentioned it, but initially the government did not pay them much attention.

The first prophecy of the hopi was published in 1959 in the form printed on the rotator newsletter and circulated among the American pastors of the Methodist and presbiterianas persuasions.

The legend of its appearance is. In the summer of 1958, driving across the desert in the southwest United States, a pastor named David Jung took in the car of an elderly Indian hopi tribe. After sitting, Indian style, some time in silence, the elder spoke…

The pastor learned that the old man’s name was White Feather and he of the ancient family of the Bear. Throughout his life, the old man collected ancient and secret knowledge of the hopi and ancient prophecies, but his life is about to end and he had no one to give them to his sons already died.

Then we are talking about the nine signs that Herald the appearance of Pakana missing White Brother of the hopi people. As evidence that he is a white Brother, Pacan will bring the symbols – the swastika (salt character), rotating in a clockwise direction, the sacred symbol of the hopi and other Indian tribes, and the lost area of the table, which is kept by the elders of the hopi. (It was about four stone tablets depicting the history of the hopi and their prophecies. The angle of the second plate is broken.)

The first sign was said about the coming of the white people similar to Pukana, but not living like him. These people take land that doesn’t belong to them, and their enemies will be hitting thunder.

The second is that the Indians know a wheel that will give them other people’s white-skinned people.

The third is about a strange beast like Buffalo but with great long horns, which will cover the earth in countless numbers. It is the cattle of the white man.

In the fourth and fifth – that the earth will be braided snakes of iron (railroad) and giant web based, electric and telephone lines, Internet, etc.).

In the sixth – that the land will be crossed-over (in all directions) stone rivers, which produce images (of the highway. In hot weather, on them there mirages and haze).

In the seventh – that the sea turned black, and many living beings die from it. (In 1958, was not yet catastrophic oil spills.)

In the eighth – that many young men wearing long hair, like the hopi people, come and join the tribal peoples (i.e. the Indians) to learn their customs and wisdom. (The first hippies appeared only six years later.)

In the ninth – that will appear dwelling in the heavens, high above the ground, one of them will fall to the ground with a terrible crash. It will be like a blue star.

Shortly thereafter will end the ceremonies of the hopi people. (It was either drop the space station Skylab in 1978, or the flooding of the Mir space station.)

Most interesting is that the hopi ever stopped to fulfill some rituals. But in hopi it is believed that, while they perform their rites, the planet exists, and if they cease to do it, then very soon the Earth will die. The whole year calendar on the complex a few times a month there are special rituals, ceremonies, the task of which is to maintain the state of our noosphere, i.e. the balance between man and the subtle-material world. This philosophy permeates all the existence of the hopi, and their whole life is subordinated to this Messianic role.

Another man talked about the fact that there will be great destruction. The earth will be shaken (will roll up and down). White people will fight with other people in other countries – those which gained the first light of wisdom (obviously, the war in the middle East, the cradle of ancient knowledge).

There will be many huge pillars of fire and smoke, the kind that white people make in the desert not far from here (nuclear testing in Nevada). But these will make the infection and a great death.

Other hopi prophecies, which had been collected by various researchers said about a Third world war. For the Indians, will start one of the first countries to receive education.

American civilization (land and people) is destined to die in this war. Saved only those who live a peaceful life according to the precepts of the hopi. They will not touch neither the war nor the subsequent global cataclysm, for they had migrated (in spirit) in the upcoming Fifth World. (The fourth World, the hopi, ends.)

The third world War will be a spiritual conflict against material values. Material values will be destroyed by spiritual beings who will remain on earth to create one world and one people, the world of the Creator.

Pacana, White Brother of the hopi will come with two assistants. When the end of the Fourth World is near, these two mighty assistant will shake the earth.

If the case of these mighty helpers fail, instead of a peaceful transition into the Fifth World, there will come a period of complete lawlessness, Koyaanisqatsi, and the world will cease to exist On the earth will fall from the sky gourd full of ashes, and many will die from terrible sores, which in this ashes.

In very ancient stone tables, stored by the Indian tribe of the hopi, tells of three ancient civilizations that have disappeared from the fire, icing and flood. The current civilization is portrayed with amazing details. For example, in tablets they say that people living in different corners of the Earth, can communicate with each other by stretched out in the sky and under the ground threads, that will create a thinking machine. Nuclear weapons are described as device all-destroying power that creates a cloud in the shape of a mushroom.

These tablets elder of the hopi Indians Martin Gashweseoma showed convened a press conference on the eve of the war with Iraq (known as operation desert Storm).

According to prophecies they contain, the attack on Iraq was the beginning of a Third world war. The prophecy stated that the first phase of the war would be local, but after a while she will grow into the next phase – core.

However, it should be emphasized that according to ancient texts the hopi even the beginning of a nuclear war is not the end of humanity: the world will save the White Brother. He will protect the righteous from the rest of the aggressive, selfish and greedy world. But first humanity will have to pay a certain price for their arrogance and irrationality, the inability to live in harmony with the world.

Interestingly, the hopi predicted at the time, the beginning of the First world war. It happened on March 27, 1911, the Then leader of the hopi Ukuma warned U.S. President Taft about the impending threat to peace.

The transcript has survived. But to the prophecy, no one listened. How did not listen and in the late 30’s, when the hopi predicted the beginning of world war II.

Devastating earthquakes in California, Japan and Turkey were predicted by the hopi with the exact day. The tribal elders warned the world about the comet on another planet in July 1994 (Talking about the comet shoemaker-levy, 21, the fragment which fell on Jupiter.)

Up to the year 2035 may occur many natural disasters and celestial phenomena, which will cleanse the planet of excess humans. The mysterious disease will contribute to this and will mow down mankind like a plague. It will bring many victims, because the cure could be found.

The hopi tell you about the machines from the sky that will save those who follow the voice of reason and lives in harmony with the world, talking about homes on the moon and red Earth on a bright new star that will soon appear on the sky.

(By the way, NASA officials not long ago discovered an unusual object several hundred times larger than the Sun. The object is located far away from our system. The funny thing is that the information obtained through the telescopes, is identical to the stories of the Hopi Indians.)

Another prophecy handed down from generation to generation, says, apparently, about the method of human cloning: a woman without your husband will be able to have children, and each will play itself.

All this you can not believe it, but over the last hundred years, many of the hopi prophecies have already come true. So now the experts special attention to the prediction of this amazing Indian people.

The use of their experience by our modern civilization would help to create a more harmonious and coherent culture, overcome the negative experience of the consumer society. Of considerable interest is the study of the mechanisms of the awakening of paranormal abilities with the initiation rituals.