Riddle of an ancient stone with a mock town 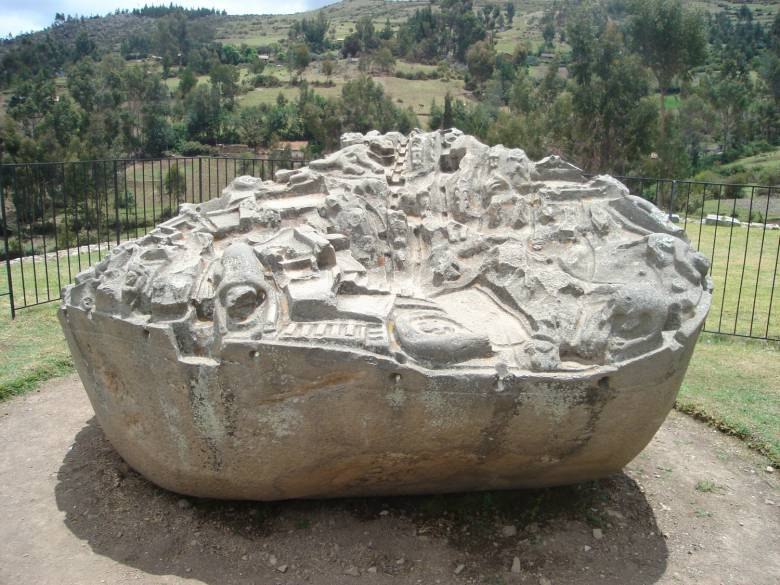 On the bank of the Apurimac River in Peru, for several thousand years a stone lies. At the base is a regular block about 4×4 meters in size, of natural origin. There are no other granite slabs in the foreseeable vicinity. However, not the problem of delivery of ancient stone slabs to the river puts scientists at a dead end. It puzzles the upper part of the boulder: on its surface it is made in a miniature … city.

Yes Yes! As children build houses and turrets from sand, an unknown craftsman of the past has carved out granite streets and buildings, a system of water canals, terraces and cultivated fields, temples and squares.

The purpose of this ancient monument is not clear. Perhaps this is the surviving stone model of the Inca city that disappeared long ago in the darkness of the centuries? This assumption is supported by the fact that the irrigation system of the stone city-layout functions smoothly to this day: the rainwater spreads through canals and rivers, “irrigating” the fields, and then flows down through the sewers at the edge of the plate (the outskirts of the city).

Archaeologists have not found any other stone models of the cities of the ancient Incas. And if the model was a prototype of the future real city, then its creator should have outstanding topographic capabilities, so that without special measuring instruments and tools create a similar mold of a length several kilometers.

Was such an ancient power? Highly developed incas – yes. That’s just the material for the layout is inappropriate – “stubborn” granite, which is still not easy to process. And the ancient architect probably had to work for more than a year.

There is an assumption that this city is a toy. However, with this hypothesis, everything is not all right: it was too expensive to cost such a toy. A tsarist person, however, could allow her child such fun, but lived a royal family far from the mysterious stone. And ordinary people?

No answer. Without a special preparation with such engineering work a simple mason would not be able to cope. Perhaps, the ancient self-taught sculptor decided to capture in the stone the strict beauty of his native city?