Riddle of the ancient gate of Tonga 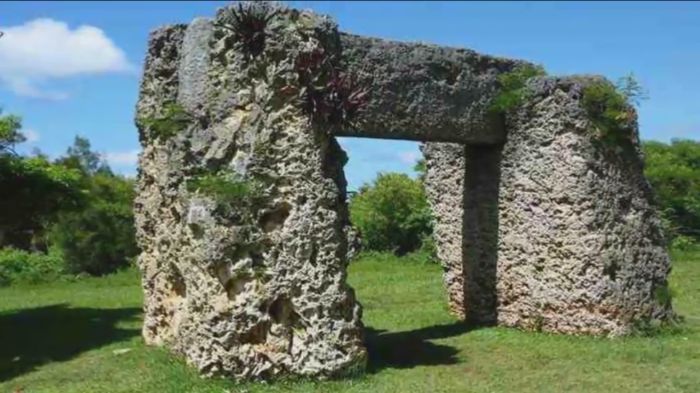 In Polynesia is a unique stone building of the XI century – the Gate of Tonga. According to local legend, at certain times of the year, after going through this gate, you can go to the place of dwelling of the local god and return this way by the same way. According to other beliefs, this is the place of burning of the dead leaders, a symbol of kinship. Ufologists are convinced that there could not have been without aliens.

The Tonga Gate is in the eastern part of the island of Tongatapu, known as the treasury of the historical past of Polynesia, its cradle. At present, there is an archaeological reserve on it.

This part of the island is wild and deserted. Deserted white beaches and bays stretched for many kilometers. The tidal wave on the coral shoals, the hard palm leaves crackle under the gusts of the wind.

And I can not believe that many centuries ago life was boiling in these deserted places. Evidence of this is the remains of the “moa” settlements scattered all over the island, most of which are located in the east. The largest of these ancient settlements is called Muu and is located on the shore of the inner lagoon.

Next to him – a plaque dedicated to the landing on the island of James Cook. Apparently, the island changed little in appearance from the XVIII century, when the legendary traveler, seeing it for the first time, called Tongatapu “a solid garden.” At the same time, Cook met with the local leaders and noted that they know their genealogy well, they are the keepers of the legends and traditions of the people.

According to these legends, the first Tongans were created from larvae by the god Tangaloa and himself became the father of the first king. Then Tangaloa sent to the earth from heaven the delinquent petty gods to help his son. It is believed that it was this myth that formed the basis of the modern social structure in the kingdom of Tonga. Until now, the archipelago is a constitutional kingdom, on the upper step of which is the king himself, below is the layer of the nobility, and then the rest of the Tongans.

The present King Tubow IV produces expensive brands, where under his portrait there is an inscription: “Tonga. Where time begins. ” Indeed, the archipelago is located at the very line of the date change: a few tens of miles east of Nuku’alof “today” is already “yesterday”.

The king is honored in this island state almost like a god, and when on the road his big limousine with a fluttering flag rides, everyone crouches and then sits on the roadside with crossed legs and folded hands. This is not just a beautiful custom, it’s a law, the observance of which is strictly controlled by local policemen.

But archaeological monuments in the kingdom are not given proper attention, and they are poorly understood, including the unique heritage of the island of Tongaputu. For example, a funerary complex built of limestone coral blocks in the form of four-meter pyramids, up to 4 m high. It is still unknown how the building blocks were delivered here. It is believed that they were brought to Tangaputu by huge canoes from other islands. After all, there is no suitable building material on the island itself.

But it is with a mysterious megalith – Gate of Tonga, that any foreigner begins to get acquainted with Tongatapu. The structure is a stone block, folded in the shape of the letter “P”, standing in palm groves. On two pillars of coral limestone, about five meters high, there is a six-meter stone crossbeam, reinforced in grooves hollowed out at the top of the pillars. According to approximate calculations, three massive blocks weigh at least 40 tons.

Scientists are puzzled: how such a strange structure was built 1200 years ago, and what is its purpose? Part of the archaeologist believes that the megalith is an entrance to the royal territory that existed in the past, but no other structures have been found in the district – one gate. Where did they lead? It is also unclear why the buildings, roads, objects of life of the mysterious palace disappeared without a trace. The only thing left was a large vertical slab standing nearby, which supposedly served as the back of the Thuyatutuyu throne.

Scientists came to the conclusion that previously the stone blocks were carefully polished. On the crossbar there are neatly carved marks, corresponding to the shortest and longest days of the year. There was an assumption that it was an ancient observatory, designed to calculate the days of the equinox and solstice. It is likely that at first the structure served as a gate leading to the residence of the kings. And then it turned into a solar observatory.

According to another version, the structure was built by the ruler of Tuitatuy with the aim of reconciliation of his enmity sons, and the trilit had to symbolize the kinship ties between them. There is another legend that the Gate of Tonga is dedicated to the Polynesian god Maui, who, according to legend, raised the archipelago from the ocean.

The riddle is also that in some parts of our planet there are similar structures. For example, Japan is dotted with many thousands of gates denoting sacred places. Only the material is different – the Japanese gates are made of wood. Near Okinawa there are flooded structures – with nothing connected to the gate of massive masonry.

The Romans also loved decorating their empire with separate ceremonial gates. There is also Stonehenge, and the gate in Polynesia could be a part of it.

All these intriguing parallels between similar monuments of absolutely different cultures convinced the researchers that perhaps in the Pacific there was a powerful “X-culture” that had a civilizing effect in all directions. To confirm this, careful scientific research of the most ancient stone construction is required. While the mysterious historical monument stands alone on the island of Tongatapu, and does not want to disclose the plans of the ancient builders.