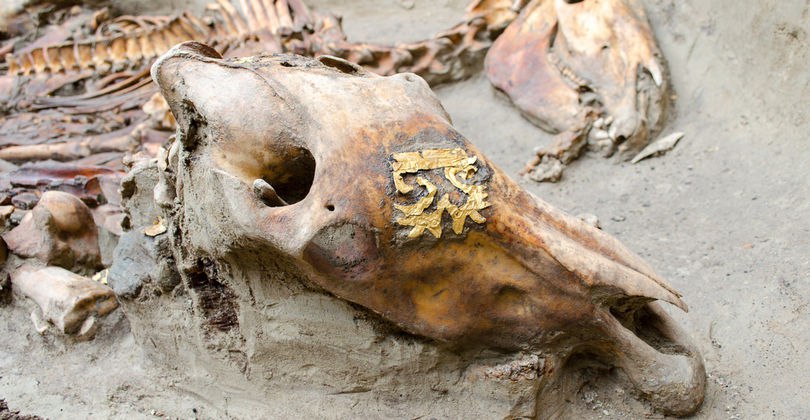 In the summer of 2016 a group of Kazakh and foreign archaeologists excavated one of the mounds berelsky in Eastern Kazakhstan. The burial of a noble woman, dated to the second half of the IV century BC, the scientists discovered the mysteries of life our distant ancestors.

IV century BC. Funeral procession makes its way through the picturesque green valley of the river Bukhtarma. This area, with three sides surrounded by mountains and rivers, considered sacred by local tribes. Reaching the edge of the burial pit, marked by a stone circle, tribesmen of the deceased put her embalmed body in the deck. They lowered the wooden sarcophagus at the bottom of a five-meter pit. Buried in life were representative of the local elite, perhaps even a Queen. To emphasize the high social status, she was dressed in a caftan, embroidered with many Golden plates. Near the woman left her personal items that could be useful in the afterlife. Beside her in the grave dropped seven stallions of fire suit. On the face of one of the horses was wearing a leather mask decorated with gold plates in the form of mythical animals. Apparently, these horses must deliver buried in the realm of the dead…

Perhaps it is this picture would appear to your eyes, if you were in Berelskoe the valley 2,500 years ago. Nowadays here is a Museum-reserve. On its territory there are more than 100 mounds belonging to two epochs: V–IV centuries BC and the early Turkic period (VII–VIII century ad). The study berelsky mounds began in the mid-nineteenth century. In 1865, the famous Russian scientist-orientalist Vasily Radlov excavated the mound № 1, named “Big Berelsky mound”. The burial of a noble man was accompanied by the burial of 17 horses.

Since then, the study of the burial site did not stop, but the real world fame Berelson mounds brought the opening of the international expedition 1998-1999. A group of archaeologists from the Institute of archaeology. A. H. Margulan under the supervision of Zanolli Samuseva together with scientists from research centers of France and Italy, and various universities of the Republic of the excavated burial mound No. 11. In the rich burial were buried man, woman, and 13 horses.

Among the most valuable finds of this burial are allocated tiaras, jewellery, ritual objects, weapons, massive pendants with three-dimensional image of a moose’s head decorated with gold plates and horns masks of horses, numerous gold figures of real and mythical animals. Many of the items are well preserved due to the unique design of the mound, artificially recreating the conditions of permafrost. The burial was built in the cold season. Stone fill of the mound, consisting of large plates, were not allowed to penetrate heat in the burial chamber, keeping the multi-year permafrost.

In 2016, the archaeologists returned to Berelskoe the valley of the kings. At this time, excavations are taking place in the framework of the plan of archaeological research in 2016-2018, developed on behalf of akim of East Kazakhstan region Danial Akhmetov and financed from the oblast budget. In addition berelsky Krusanov, the project includes five objects: Chiliktinskaya mounds of Zaisan district, Jungar monastery Ablaykit, monuments Karakuri in Abai district and Alike Sazy Tarbagatai. In Berel excavations began on may 24. Field work was attended by about 60 people. It’s mostly freshmen East Kazakhstan State University, student archaeologists KazNU named after al-Farabi, the staff of the Museum-reserve and other museums of the country. Excavations also took archaeologists from Russia, scientists from Turkey and Japan. The head of the project was the author of the discovery of the 11th the mound Zeinolla Samashev.

First, the researchers carefully removed the sod layer soil. The above-ground part of the mound, which stood 2-3 meters has not survived to our days. The stone embankment was disassembled for construction in the Soviet time. Under the modern soil scientists have discovered a stone structure in the form of a perfect circle. Carefully record all details of the burial of the circle, they continued the excavations, making the cut of the burial pit from North to South and from West to East. They were thus able to determine the approximate place of burial called burial spot.

Working first as a digger, and then, clearing the grave by hand with shovels and brushes, researchers gradually deepened to 5 meters from the ancient surface of the earth, which went on the builders of the mound. There was discovered a wooden frame with burial of the women and seven horses.

The ceiling of the burial chamber rotted away, and they were only external signs. The remains of a woman was located in the deck made from larch. Archaeologists immediately noticed that they are in an unnatural position. Scientists have determined that the mound was looted by his contemporaries buried.

Traces of the robbery we noticed that when we started the excavations. They are clearly visible in the South-Eastern part of the burial pit. We assume that the looting happened a few decades after the construction of the mound. If you look at the position of the body is buried, it becomes clear that her remains had not yet decomposed, when here was a robbery. They dragged them to the corner of the wooden frame, ” says archaeologist Zhalgas of Almaganbetov.

Buried, apparently, was wearing a gold embroidered robe. Apparently, it was a very rich burial, which indicates the high social status of this woman.

Despite the looting of tombs, scientists have managed to locate several valuable artifacts. They found thin gold stripes with zoomorphic and geometric patterns. One of them even kept the thread from a burial garment. 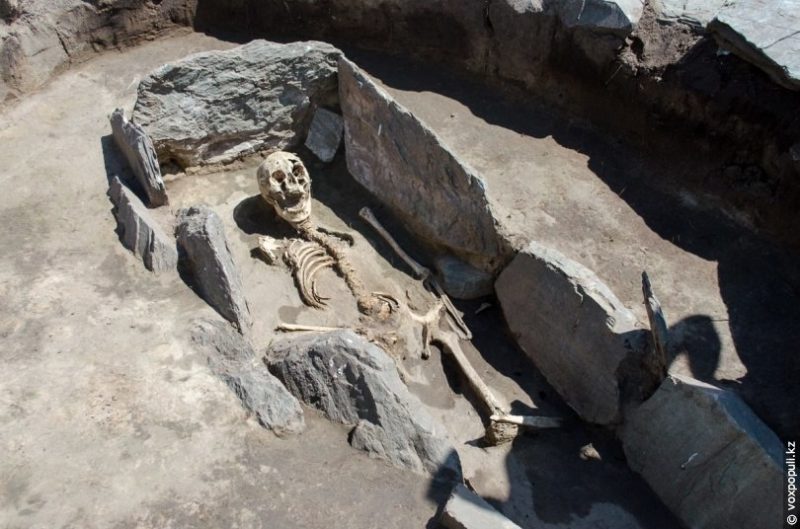 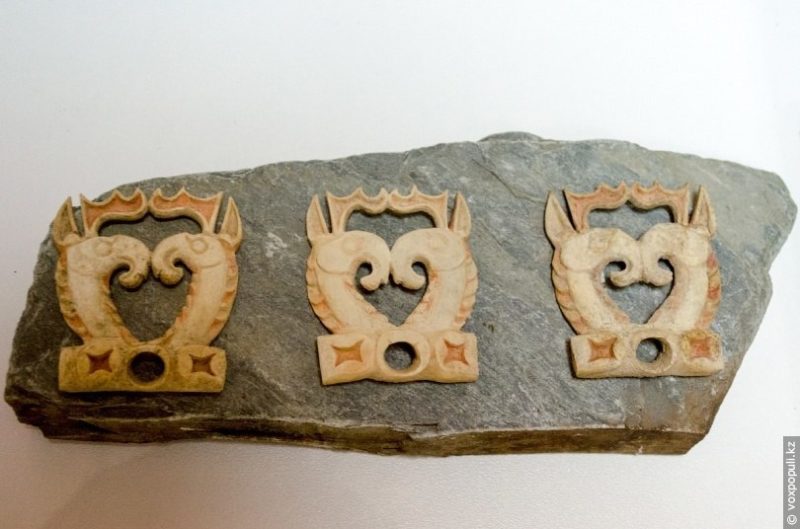 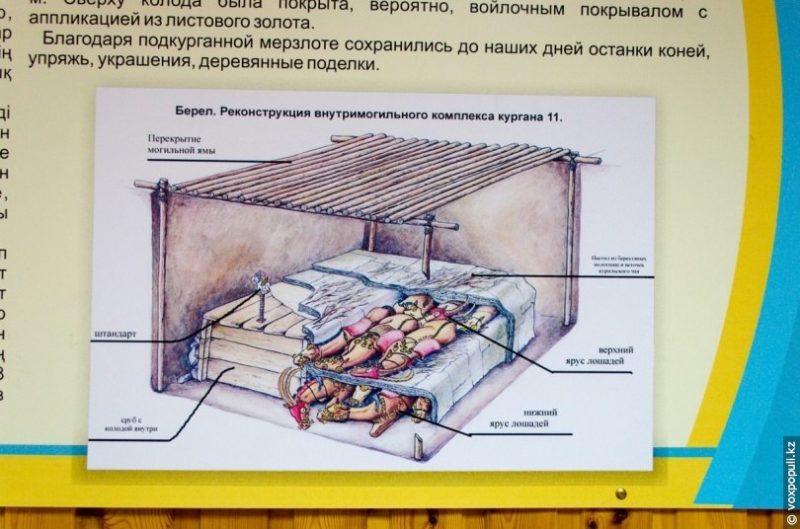 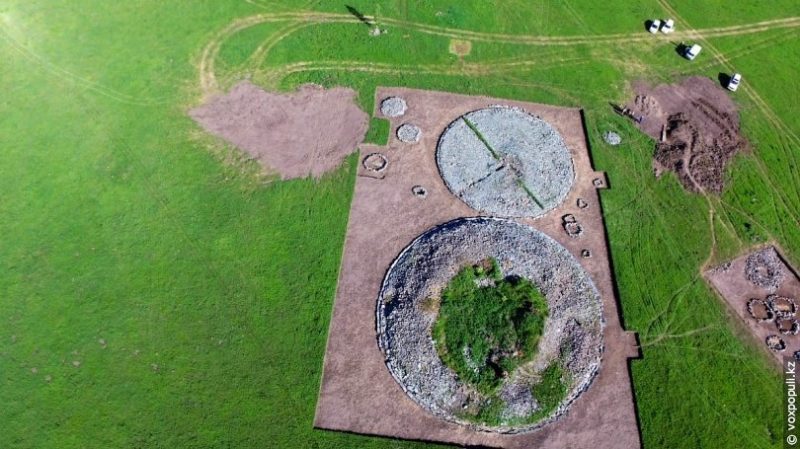 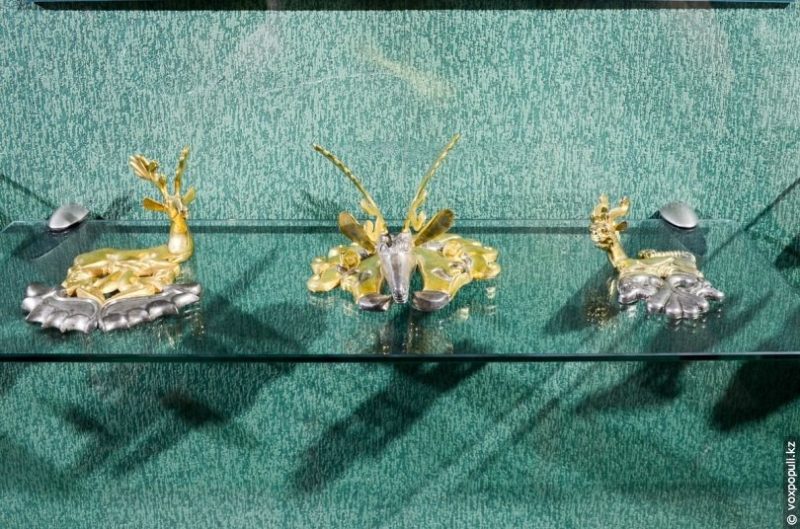 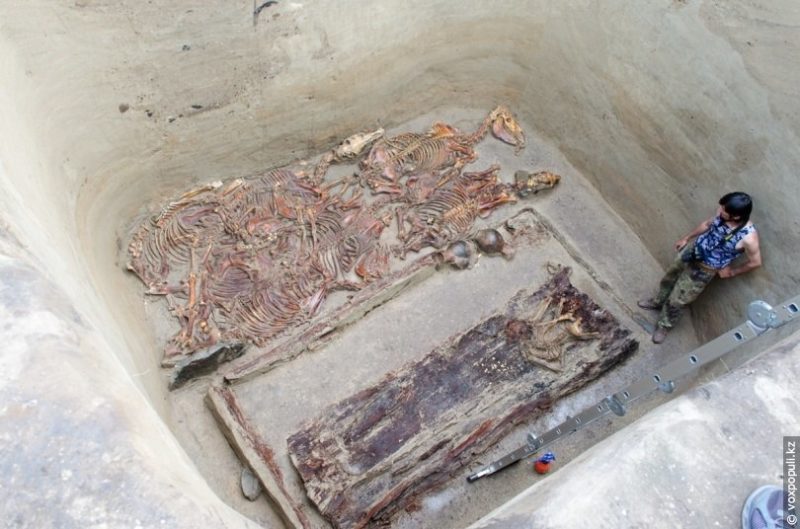 — Buried, apparently, was wearing a gold embroidered robe. Apparently, it was a very rich burial, which indicates the high social status of this woman, ” explains the project Manager of a study of Kurgan No. 2 zeynolla Samashev.
Big Berel tumulus

Scientists believe that they studied mound No. 2 is directly connected to the nearby Big Berelsky the barrow 1, excavated by radiovym in the mid-nineteenth century. According to the archaeologists, the woman from the second mound was the nearest relative of the leader of the first burial. Perhaps she was even his wife.

— The date the device Aralskogo Large mound — 367 BC. It is located very close to mound No. 2. When we began excavations, immediately assumed in our grave buried someone very close to the man from a nearby mound. It was found that mound No. 2 was built by 2-20 years later than the first. We have a working version that the buried woman was a Queen, the wife of the chief from burial mound no 1 — explains the problems of Samusevich.

She probably suffered from some disease and used grated cannabis as a pain reliever.