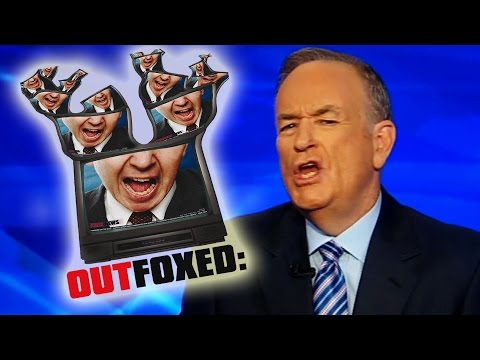 Outfoxed shows how Fox News is used to promote and advocate right-wing views. 3:09 One day orders came from Murdoch’s offices that the network should cut away from their regularly scheduled program and broadcast the RNC’s fawning tribute to Reagan: “we were ordered, from the top, to carry propaganda; Republican, right-wing propaganda”. It foreshadowed what Fox News would later become. 6:30 Former Fox News reporters and bookers say that they are afraid to be seen “talking to the wrong people”. 19:04 Fox News contributors are under paid contract for their appearance; if they deviate from the party lines, they might not get asked back onto shows. 21:22 Fox News went after Richard Clarke as soon as it was apparent that he was going to paint the Bush administration in a bad light. 26:29 Republicans accounted for 83% of the guests while Democrats accounted for 17% of guest on the network’s most prestigious show. 27:50 Stories they Cover…Stories they Ignore – Management set the tone for stories: Jesse Jackson was always to be painted in a negative light, as were immigrants. Culture war issues – abortion, affirmative action, gay marriage – were often covered while ignoring issues regarding the economy, health care, and the environment. 42:00 Many Fox News stories are meant to generate fear; for example, stories about what to do if there’s a “dirty bomb” attack. 46:29 Fox made the decision to present the Iraq war as a success. “The senior producer told the two or three writers for her news hour…’now, just keep in mind that it’s all good. This is such a fair and balance issue. Keep it positive. We got to emphasize all the good we are doing”. 48:43 Knowledge Networks Poll – It’s a simple survey about fact regarding current events. The more likely people were to watch Fox News, the more misinformed they were and the more likely they were to back the Bush Administration. 50:49 Fox News repeats and propagates the Republican Party platform. 52:47 Election Night 2000 – The first guy to call the election for Bush was the head of Fox’s New’s election analyze division; Bush’s first cousin. He called it a clear win, when in fact it was too close too call. 59:16 The Republican send out “the message of the day” so that conservative talk radio, Fox News, and Republican elected officials will all be talking about the same issues, in the same way.