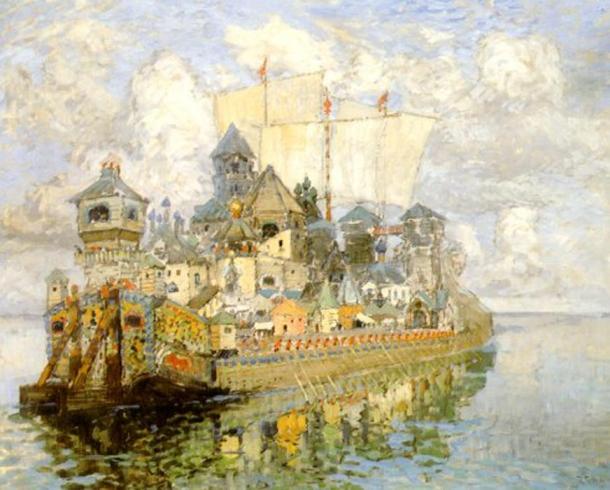 According to this chronicle, the city of little Kitezh in the early thirteenth century, founded the Prince George, Grand Duke of Vladimir, on the Bank of the Volga river, in the Voskresensky district of the Nizhny Novgorod region. Then he found a beautiful place further upstream, on the shore of lake Svetloyar. There he decided to build the town of Great Kitezh. It was founded as a monastery town, everyone thought this city Holy.

“The Grand Duke made a beautiful city, built it in the shape of a circle with churches, monasteries, and aristocratic palaces. Then he surrounded it with a trench and erected a wall with loopholes,” wrote Adele Barker and Bruce Grant, The Russia Reader: History, Culture, Politics [“the Russia reader: history, culture, politics”].

In 1238 the North-Eastern Russia was captured by the Mongols under Batu Khan, who ruled in 1207-1255 years and was the founder of the Golden Horde. Having besieged the city of Vladimir and the surrounding city, the Khan learned of the powerful city of Kitezh and determined to capture it. First, the Mongols came to a Small Kitezh. Grand Duke George went to meet them and engaged in battle with them, but in the end was forced to flee back in the direction of greater Kitezh, whose whereabouts remained unknown to the Mongols.

Batu was furious and ordered to torture prisoners until they give the location of Great Kitezh. Prisoners are not given the secrets to your Holy city, because, in their opinion, it would bring to themselves and their posterity eternal damnation. However, one of the prisoners named the Commotion did not survive the torture and revealed the secret paths to the lake Svetloyar.

Description of further events in the annals vague and ambiguous. “The only thing we know that the Great Prince was able to hide Church utensils in the lake, and then fell in battle. By the will of God the city itself was invisible; in its place was visible the water and the forest,” say Barker and Grant.

The legend of the invisible city

It is unclear what exactly happened to Kitezh, but for many centuries about his mysterious disappearance, told in legends and folklore. According to one popular tale, the whole town sank into the lake by the will of God not to give his treasures to fall into the hands of the Mongols. Because of this, the lake Svetloyar is sometimes called the Russian Atlantis. Legend has it that the army of the Golden Horde in disarray watched the city sink into the lake. The last thing they saw was the sparkling white dome of the Cathedral with a cross. But actually the disappearance of the city, perhaps, was not so great. Some archaeologists have suggested that the city could suffer from the landslide which fell into the lake.

According to folk tales, the city of Kitezh is visible only to those who are pure of heart and soul. Those who believe in these legends, often told that you hear coming out of the lake, the sounds of Church bells, see the lights, or even the outlines of buildings beneath the surface of the water. In the past pilgrims visited the lake in the hope of hearing the bells. They went there to pray and leave offerings for the inhabitants of the city. It is also said that during the Second world war, women went to the lake to pray for their sons.

In search of Russian Atlantis

In 2011 was carried out by the archaeological expedition to the village of Vetluzhsky with a view to finding archaeological remains in the area of lake Svetloyar. Excavations have revealed traces of ancient settlements, as well as fragments of traditional Russian ceramics. The researchers plan to continue their research. According to their estimates, the hill where found artifacts have always been prone to landslides. One of these landslides the ancient city could take in the lake, and that gave rise to fantastic tales of the invisible city of Kitezh.

Kitezh: the Mythical Invisible City of Russia Could Have Been Real – Learning Mind

Kitezh: the Mythical Invisible City of Russia Could Have Been Real - Czaal is a source for deep thinkers, lifelong learners and truth seekers. Posts on science, self-improvement, psychology, unexplained mysteries.