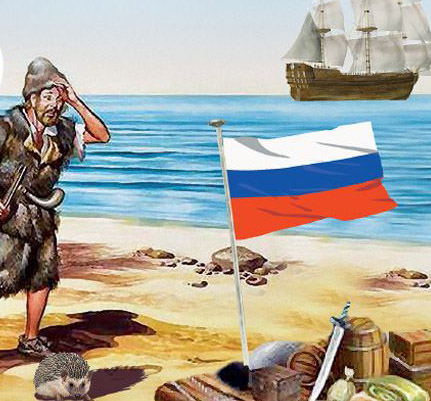 A novel about the adventures of Robinson Crusoe of Daniel Defoe has long been a classic. It is known that in the heart of the story lay a true story that happened with the Scottish sailor. Few people know that 150 years ago in Russia was almost the same story. That’s just Russian “Robinson Crusoe” appeared on the island in the African heat, and the shores of the cold sea of Okhotsk.

In 1882 in the magazine “Russian antiquity” published an article writer Alexander Sibiryakova on the “Russian Robinson”. Its prototype was Sergey Petrovich Lisitsyn. Hereditary nobleman, graduated from physical-mathematical faculty of the Imperial St. Petersburg University and cornet life guards hussar regiment. 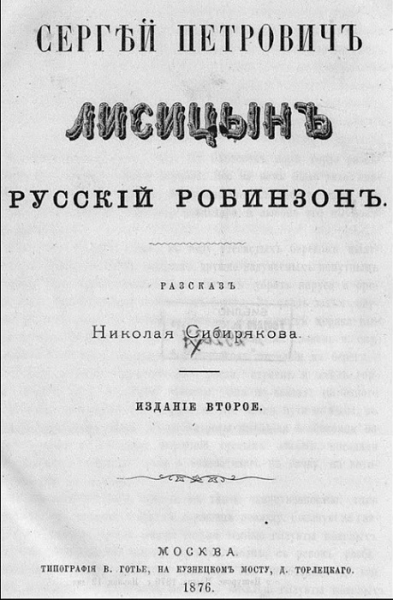 The son of an officer of the Russian army, who was killed in the battle of Silistria, Sergey Lisitsyn was raised by her aunt in the estate of Sosnovka, Kursk province. He graduated from the University with the degree of candidate of mathematical Sciences. But teaching and research activities of the young nobleman not attracted. He entered the life guards hussar regiment.

The vibrant life of the capital guards extinguished the duel with the regimental adjutant. All survived, but the lush hussar g-man had changed to a dull coat official. To become another St. Petersburg “by Akaky Akakievich is a” retired hussar? It’s unbearable! Because he enthusiastically accepted the invitation of a relative who served in Alaska, to serve on the edge of the American continent. And one day in 1847 24-year-old capital dude stepped on the deck of the ship under the flag of St. Andrew.

A retired cornet Lisitsyn was adopted in the officers ‘ wardroom was very friendly. But hussars, he retired hussar. Once the guest is in a drunken state said cheek in the face of the commander of the ship, and was sent under arrest. And from his cabin was to knock out a guard of sailors to mutiny. The captain ordered to twist the instigator, tie his eyes and drop them on a deserted beach.

When the prisoner freed from the shackles and tore the bandage from his eyes, on the horizon he saw the departing ship. Noble captain left him with not only suitcases with clothes, three pairs of boots, coat (the sea of Okhotsk – not a tropical ocean), a pair of pistols, sword, dagger, stock, sugar and tea, gold pocket watch, folding knife, pound of crackers, two jars of vodka, but writing stock writing paper, clean notebook, razor and tea appliances, a flint, a supply of matches, pencils, paints, paper for drawing, 2800 rubles credit tickets and even 200 cigars.

All this was accompanied by an excellent gun with 26 charges and a note of the captain, “my Dear Sergei Petrovich! The Marine Charter you ought to be condemn to death. But for the sake of your youth and your wonderful talents, and most importantly, noticed my good heart I give you life… Sincerely wish to have privacy and need corrected your poor character. Time and reflection will teach you to appreciate my leniency, and if fate will ever bring us again, which I sincerely wish, we meet enemies. A. M.”.

Nobleman Lisitsyn had nothing to do with their hands: in the estate of serving serfs, the regiment took care of Batman. Knowing that the ship was sailing in the sea of Okhotsk, he had hoped that he was left on one of the scraps of land the ridges of the Aleutian or Kuril Islands. But he soon discovered that his situation worse. He was trapped by fate in the jaws of the two seas. In front of him splashing the cold Okhotsk sea, and behind rustled the dense green sea of taiga”. And there are bears, wolves, lynx, poisonous snake…

For a week, “Russian Robinson” staged a house with an oven made furniture. Made a sling, bow and arrow (wisely deciding to preserve ammunition for the gun). And rightly so – in the winter his house was eager hungry pack of wolves was killed by a shotgun 8 predators at close range. And before that, shot a bear by providing a warm coat and a supply of bear meat. Fished, gathered and dried mushrooms.

But what Robinson without Friday? April 12, Sergey Lisitsyn was walking along the Bank, assessing the impact of spring storms, and saw lying prone person. No powers, no senses. It turned out that Basil, the so-called accident, transport, marching in Russian America. The ship sprang a leak, all with him fled, and his son forgotten. The ship was found nearby. In addition to the 16-year-old kid it was two sheep dogs cats, 8 Kholmogory cows, bull, 16 oxen, 26 sheep, food supplies, tools, seeds, barley and rye, and another weapon, a telescope, two telescopes, a samovar, construction and garden tools.

Seven months of solitude completely weathered in “master” all aristocratic arrogance. With this economy and with two pairs of strong and skilled hands they are for summer not only updated the home and bath, but also learned to make butter, sour cream, cheese and cottage cheese. Broke the field and gathered the harvest of barley and rye. Organized abundant fishing of sea and river fish. Began collecting and processing of mushrooms, berries and forest herbs. In a word, healed the labour commune.

The municipality from time to time tried to attack the Chinese smugglers. That’s handy for a naval gun from a ship. Once the sea of Okhotsk was approached by warships of the Russian fleet, sent to protect our borders from uninvited Chinese guests. Russian sailors and helped the settlers to repel the Chinese. In 1857 the writer Alexander Sibiryakov met with a hospitable host copper and gold mines in the Amur region Sergey Lisitsin. Deposits of copper ore and the gold once found, being alone. He was appointed by the government and managing these lands. Basil “Friday” was with him. His son studied in Moscow University.

And at St. Petersburg University through Lisitsyna studied the two sons of the commander of the ship that once landed troublemaker-hussar on a deserted beach. Becoming a rich man, Mr. Jackson found the old man sent him on his way and took care of all his children. The history of “Russian Robinson” ended richer literary. And more humane.