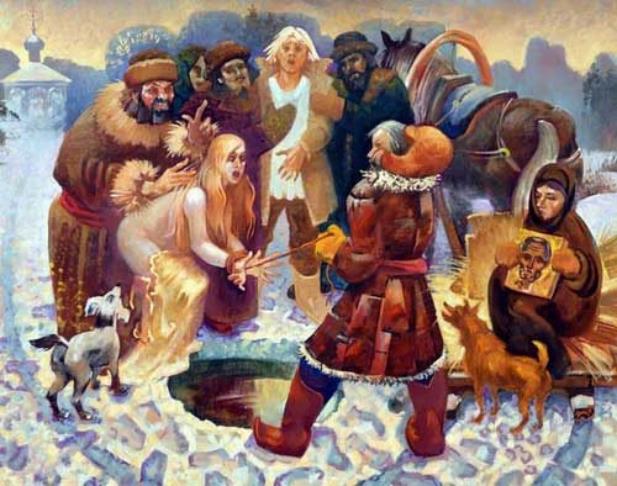 In Orthodox Russia did not spread to the West “witch Hunt”. However witches have followed us.

Already in “Tale of bygone years” we meet a line worthy of inclusion in “Hammer of witches”: “most of all, through the wives of demonic enchantments are, because from time immemorial the devil has seduced a woman, she’s a man, because in these days many women vahvuus magic, poison, and other devilish machinations” (1071).

The Church statutes of Vladimir Svyatoslavovich (the final version was formed in the early 12th century) describes the number of crimes subject to the ecclesiastical court not only “eroticist” and “witchcraft”, and “nodes [zagovornye nodes to flush diseases of hex]”.

The Charter was in force until the 17th century inclusive, in the reply of the Archbishop of Tobolsk Cyprian Royal Governor (1623) stated, with reference to the decree of the king and the Patriarch, “witchcraft… that’s all the Lord, our spiritual matters” (History of Siberia. The sources. IV vol. — Novosibirsk, 1994. — Pp. 255-256).

The Charter of Yaroslav the ecclesiastical courts (ecclesiastical code of law, developed in the 13th-14th centuries) provided for the soft punishment: “If the wife will cardeira, nausnice, or a sorcerer, or selanica, husband, catch,. to punish her, but don’t divorce”. In this case, the Church left the punishment of a witch her husband and severity of punishment depended on the relationship of the latter to his wife.

In the epic about Dobrynya Nikitich tells how he “taught” his wife, the witch, “eretico” and “atheist” Marina Ignatyevna: “head in her compartment, and with a language completely/ And that language is not needed,/ he Knew things heretical” — but such punishment, of course, was not normal.

It was the practice of burning witches. Actually, the ritual burning of the Magi existed among the Gentiles. Suzdal Bishop Serapion preached in the 70-ies of the 13th century:

“You still hold a pagan custom volhovaniya, believing, and burnt innocent people. In any books, in any Scriptures, you have heard that of famine come in the land from volhovaniya? If you believe that, then why do you pozhivaete of the Magi? Please, honor them, the gifts they bring, to not satisfied with the pestilence, the rain let loose, the heat brought the earth commanded to be fruitful?

If you want to clear the castle of the wicked people happy. Clean, as David the prophet and king, destroyed the city of Jerusalem all the workers of iniquity: some by death, others by exile, the other the same dungeons, the city of the Lord always did a decent, free from sins” (IV teachings of the monk Serapion // Gromov M., Mielke V. Ideological currents of ancient thought. — SPb., 2001. — P. 546-547).

Normal for the middle ages a double standard — Serapion merciful acts against killing the sorcerers of pagan motifs, but then requires to execute them as enemies of Christianity.

It is not surprising that with the adoption of Christianity, the burning did not stop. In 1411 the twelve witches were burned in Pskov on suspicion that afflicted the city of the plague. In 1444 the city of Mozhaisk, the Prince ordered to burn the Boyarynya Maria Mamonova “magic”. In 1575 Ivan burned in Novgorod 15 witches. A few witches were burnt by order of his son, Theodore Ivanovich.

In 1638 investigated the case Zamoskvoretskaya witches. One of the tsarist zolotoshveyki in a rage did slander a friend, he says, sprinkled the enchantress ashes on the sovereign trail.

Under the brutal torture of witnesses of witchcraft began to testify. Royal detectives got to a certain Nastasia, wife of Lithuanian Yanko Pavlov. Clearly, accused witch that it is a foreign spy. Began to find out was if she from the Polish and Lithuanian king “order of the Emperor and the Empress to ruin”. On the rack Nastasia admitted that “pour told me not to lihova of the case, and how the ashes of the Emperor or the Empress Queen will go, and who in those days will the petition, and the matter and shall be”.

On the misfortune the witch, in 1639 happened in the Royal family trouble. After the disease died five-year-old Tsarevich Ivan Mikhailovich, and after — born heir Vasily Mikhailovich. The sovereign decree he commanded to be tortured sage. “In the course of the investigation died, the same fate was prepared for her companions, the blind Ulyana. The rest were sent into exile.

In the seventeenth century witchcraft was in Russia a state crime. According to historians, the first private legalization of the fight against sorcery took place under Tsar Feodor Alekseevich. In the “Letter on the establishment of the Slavonic-Greek-Latin Academy” attributable to 1682-1685., wrote:

“This from us the sovereign dispensation of the school alone General and it just blessed from the Church of science will be Yes. From the Church and forbidden Sciences, but supremely natural magic. And other such do not teach and teachers none IMEI. If those same teachers obrashatsa where they are with students all sorcerers without relief Yes burned”.

The death of the Fedor Alekseevich was attributed to popular rumor sorcerers of the German settlement. The rebellious Streltsy stormed the Kremlin. Looking for doctor Daniel van Garden. Not helped foreign doctor the protection of the Princess Sophia. The doctor was recognized as a witch, as in his house, the archers found a centipede a marine animal. The pickled octopus was the final proof of guilt, “regicide”. The doctor was brutally tortured and chopped to pieces.

Everything that happened in those years, very much resembles the political repression of the Stalin years. All the same slander, unjust accusations. Many people in those days settled scores with enemies. Testimony was extracted under torture and acquitted.

Loud process shook the whole area. Not spared and the king’s confidants, because the mere accusation was enough to make the car to investigators, crushing everyone who gets in. Kings of horror scared of witchcraft and are easily parted with those who were suspected.

In the troubled times of the confrontation between Sophia and Peter took an active part sorcerers. The head of the Streltsy order okolnichy Fedor Shaklovity was sent in Transfiguration warlock to lime Peter. The sorcerer Vasily Ikonnikov demanded of Sophia five thousand rubles for pointing a deadly curse on the Emperor.

But not alone Sofiene accomplices were so tricky. Gentleman of the bedchamber of king Peter, who later became Chancellor, Gavriil Golovkin in great secrecy brought to the king, the Tatar Mirza Ibrahim Dolotkazina and Tatar Motorola.

Magicians used enchantments on the books and said to Peter victory in the political struggle.

The ruble is money, a quarter of rye flour, half wheat flour OSMANY, osmino peas, half asimina cereals, patosi of meat and half a bucket of wine — much appreciated services of a sorcerer Dorothea Prokofiev steward Andrew Bezobrazov. He instructed the witch to enchant the king Peter I, in order not to send it, the old Governor in the Terek river.

Sorcerer request fulfilled. Let the wind spell. However, gave it away. The centurion was executed on red square, and the Swamp area on the same day a demonstration was burned in the log and the sorcerer Prokofiev assistants “for their theft and their gosudarstve health for evil magic and bogomolny intent.”

Do not forgive the rulers of attempts the supernatural power to influence their decisions. In the “Military Articles”, published in 1716, Peter I prohibited different types of witchcraft under pain of severe punishments. There was first introduced the point about the punishment not only sorcerers, but also their clients: “Who is the enchanter of the bribe, or to bow to anyone else harm perpetrated, the aforesaid as well as the sorcerer himself, will be punished”.

Sorcerers autocrat pursued, but there is speculation that he is using his Advisor Bruce together with his colleagues was engaged in magic, alchemy, and astrology. Legends? A true story? With our kings will be.

Officially to prosecute witchcraft in Russia ceased in the nineteenth century. Authorities announced sorcery ignorance. But little has changed. In the villages from time to time burned witches, and in aristocratic circles used new-fangled occult rituals. Attempts to magically influence the rulers, apparently, never stops.