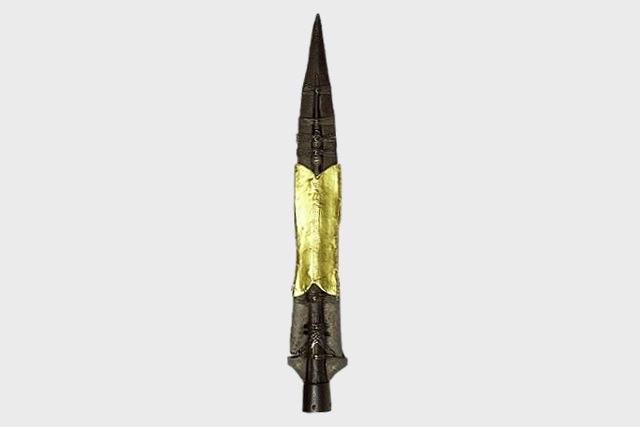 Sacred spear from Vienna (the Spear of Destiny, Spear of St. Mauritius, the Hofburg spear) is one of the greatest relics of medieval Christendom. For many centuries, along with the Armenian, the Vatican and the Krakow spears was considered one of the authentic instruments of the Passion of Christ. According to one version, the spear belonged to the Roman centurion Gaius Cassius longina. According to the gospel of John, but especially the apocryphal gospel of Nicodemus, the centurion that this weapon caused the crucified Christ “blow of mercy”, having pierced his right side between the fourth and fifth rib. Thus, it is believed that the tip is soaked with the blood of Christ. According to another, later, a spear was owned by St Maurice, soldier of the Theban Legion and a Christian, martyred in the German lands in the fourth century.

It is believed that in its original form, the spear was at about the height of two human growth. Up to the present day survived only the tip of a length of 50.8 cm and a width of 7.9 cm consists of two plates, fastened with silver wire, and plugs with two wing flaps. Plates have many of the later cuts, as well as inserts and supplements of iron, copper, silver, gold and leather. The blade is inserted nail, which is also one of the instruments of the Passion. 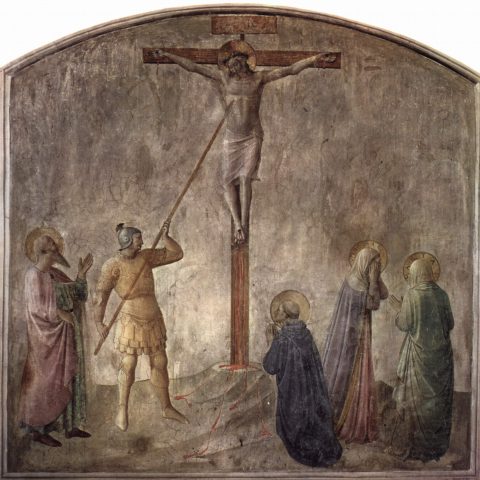 The centurion pierces the right side of Jesus Christ. Mural. Fra Angelico. Around 1440. The Dominican monastery of San Marco (Florence)

The history of the Vienna spear is authentically traced from the middle of the tenth century. At the meeting in worms in the year 926 of the German king Henry I the Fowler got it from the Burgundian king Rudolph II in exchange for the South-Western lands of the East Frankish Kingdom (modern Basel). According to the historian of the tenth century Liutprand of Cremona, the spear was the German king Otto I during the famous battle against the Hungarians on the Lech (955). According to Liutprand, before the spear belonged to Charlemagne, and before Emperor Constantine the Great, but the document is not confirmed. Later the spear was owned by many emperors of the Holy Roman Empire. The earliest image found in Regensburg sacramentary the beginning of XI century, the miniature with the scene of the coronation of Emperor Henry II the Saint. The sacred spear he holds in his right hand.

The Holy nail into the blade inserted between 1084 and 1105 years on the orders of Henry IV to commemorate his coronation. The instrument of the Passion at the same time strengthened the silver Hoop with the inscription: Dominicus Clavus Heinricus D(ei) Gr(atia) Tertius Romano(rum) Imperator Aug(ustus) argentum hoc iussit ad confirmatione fabricari(m) clavi lancee sancti Mauricii Sanctus Mauritius (the‘Nail of the Lord by the Grace of God Henry III (actually Henry IV. — Approx. A. S.), Emperor of the Romans and ordered to produce this silver to strengthen the Nail, the Spear of St Maurice St Maurice’). In the XIV century by order of Emperor Charles IV of Luxembourg on top of the nail set gold trim, engraved on a Latin inscription: Lancea et Clavus Domini (‘Lance and Nail of the Lord’).

Sacred spear for thousands of years was kept in different places: in Magdeburg, Prague and Nuremberg. From the late eighteenth century to the present, is in the Royal Treasury of the Hofburg in Vienna. Only briefly during the Second world war under the personal direction of Hitler, the spear was taken to Nuremberg.

What is interesting for science: In modern science the idea of the ancient origins of the spear is completely rejected and is accepted a later date. In his characteristic shape of the tip relates to the early middle Ages. Until recently it was dated from the Carolingian period (second half of VIII — IX century). However, after additional research, conducted in 2003, found that a weapon forged in the VII century. Besides time, and the silver wire holding the broken tip. In any case, the spear could not be any longino, nor even the Holy Mauritius. On the contrary, the nail length and shape consistent with what was used by the Romans in the beginning of our era.

Analysis of the tip also demonstrated that the spear was never used as a combat weapon, but performed extremely symbolic and representative function. For many centuries it was an important Royal regalia. At other points in time, the spear was even more significant attribute of the power of the ruler than the crown.

What to know: the Attitude to the sacred spear allows us to understand the essential points of views about power in the Middle ages. According to the interpretation of St. Augustine, from the wound in the side of Christ the Church was born, from it also flowed the Sacraments. Thus, the spear was seen as symbolic instruments of creation of the Christian Church. It was believed that possessing the spear of the ruler was in most direct communication with Christ, and his power has literally attained a divine nature and was on the ground above the power of the Church. In addition, the possession of a spear did the Emperor invincible, and gives him a wonderful gift of foresight. The figure of the ruler was truly exceptional, and in his hands was the fate of the world.

Around spears has developed a rich mythology. In particular, many legends attributed to him the greatest military victories of the ancient rulers: Constantine the Great, Theodoric, Justinian, Charles Martel, of Charlemagne, of Henry Fowler and so on. In modern times the spear was an important artifact of European culture. It appears in a huge number of works from Wagner’s “Parsifal” to the modern computer games.