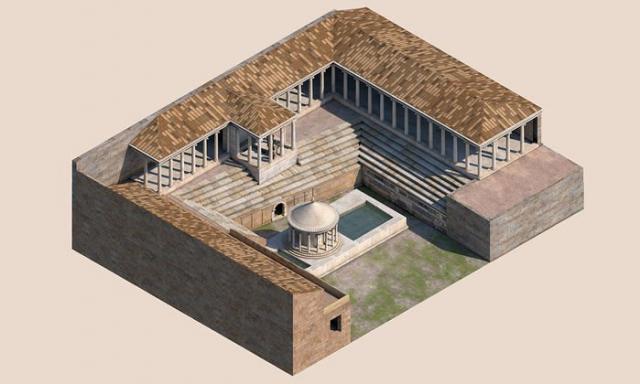 A group of scientists from Germany and Turkey found an explanation for how priests managed to survive unharmed through the “gates to hell” at the time of Ancient Rome at a time when sacrificed animals fell dead without any human intervention.

The so-called “gates to hell” were found in many places in the Mediterranean. They were, as a rule, near the temple. Scientists believe that mysterious deaths have a geological explanation.

Researchers studied the stone entrance to a small grotto near the ancient city of Hierapolis (Pamukkale), located on the territory of modern Turkey. The gates to hell were made in one of the walls surrounding the rectangular arena. Here was a temple and a place for visitors.

The structure called Plutonium was located 2.22 thousand years ago in the geologically active zone. It was believed that the local thermal springs had medicinal properties. At the same time, through the rift in Hierapolis carbon dioxide was thrown out. At the site of the outbreak, archaeologists believe, “the gate to hell” was built.

In 2011, researchers reported that they are still active. Flying too close to him, the birds fell and died.

Now a group of specialists led by Hardy Pfants from the University of Duisburg-Essen studied the source in more detail and measured the level of carbon dioxide concentration.

It turned out that in the daytime the sun dissipates carbon dioxide. At night, his concentration was much higher. According to scientists, the bottom of the arena was the most dangerous for living creatures at dawn, when the level of carbon dioxide at a height of 40 cm from the floor reached 35%, which is enough to cause the death of an animal and even a man within a few minutes. However, with increasing distance to the floor, the concentration of CO2 dropped significantly.

According to researchers, the priests most likely performed sacrifices late at night or in the morning. Animals that were sacrificed were not high enough that they could avoid exposure to carbon dioxide. The growth of the priests allowed them to stand in the arena without damage to health. Scientists suggest that people could even be on the rocks.

The Greek historian Strabo wrote that the priests could safely approach the “gates to hell”. He explained their immunity with castration.

Pfantz believes that the priests were careful and did not come very close to the gates, approaching them only about noon.

This opinion is not accepted by archaeologists from the University of Solento, who opened Plutonium in Hierapolis in 2011. They found a lot of ancient lamps in the vicinity of the “gate to hell”, which, according to Italian experts, indicates that the priests came here at night, despite the dangerous level of carbon dioxide.