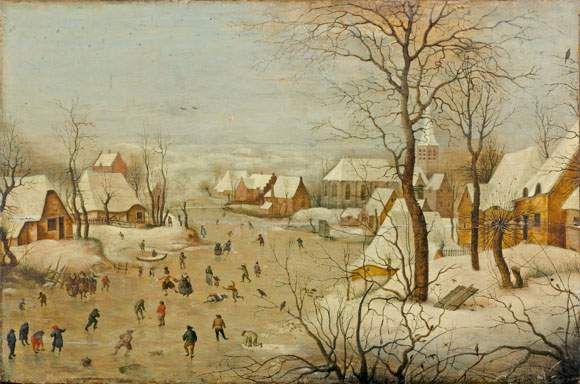 This happened on October 10, 1465, the day of the long-awaited wedding of King Naples of Alfonso II. He married Hippolyte Maria Sforza, a noblewoman from Naples. When she arrived in the city the crowd gasped. The people had a strange and beautiful appearance, which they had never seen before. And it was not in the bride – they looked up at the sky. Although it was noon, the sun became dark blue, plunging the city into a complete eerie darkness.

It was just the beginning. In the following months, the European weather has deteriorated. In Germany there was such a heavy rain that corpses surfaced in the cemeteries. In the city of Torne in Poland, the inhabitants rode the streets in boats. The downpours flooded the basements of the castle of the Teutonic knights, and whole villages were washed away with water.

Four years later, Europe overtook the mini-glacial period. The fish froze in the ponds. The trees did not blossom, the grass did not grow. In the Italian Bologna, snowfall drove the inhabitants out of the house, and they traveled with horses and carriages along the frozen rivers.

The reason for everything was the eruption of a giant volcano in the tropics. A cloud of ash enveloped the Earth and led to the coldest decade of many centuries. The explosion of the volcano itself was heard over 2 thousand kilometers. The tsunami that followed the eruption swept hundreds of thousands of kilometers. But scientists still can not find a volcano that exploded so catastrophically!

The eruption was, and this is indisputable. As in most of the mega-eruptions, huge amounts of sulfur fell into the air, which fell on the poles in the form of sulfuric acid and was preserved there in the ice.

In the 1950’s. Archaeologists decided that the culprit of the grandiose eruption was the volcano Quae. But after it turned out that the volcano erupted in 1453 – too early to prevent the wedding of Alfonso. However, the explosion of Kuae also did not do without consequences. In Sweden, the harvest was lost, and grain stores were emptied. Throughout Europe, trees have ceased to grow. In China, tens of thousands of people were frozen to death. For several months it was snowing by the Yangtze River, the Yellow Sea froze 20 kilometers from the shore. On the other side of the world, the Aztecs faced the greatest hunger.

But if the eruption was not on Kue, then where? The riddle of the “missing” volcano has not yet been solved.

The volcanic explosion probably occurred in the tropics. There, the rising air can push the volcanic cloud higher into the atmosphere, where it remains for many years. The ash plume is likely to spread over a wider area, since the winds push the air from the equator to the poles.
Other scientists propose to pay attention to the archipelagos, including remote parts of Indonesia, Melanesia, Polynesia and Micronesia. The volcano was probably huge, and he needed a lot of space.

http://www.bbc.com/future/story/20170630-the-massive-volcano-that-scientists-cant-find nearly word for word rip, you need to cite that this is from another website