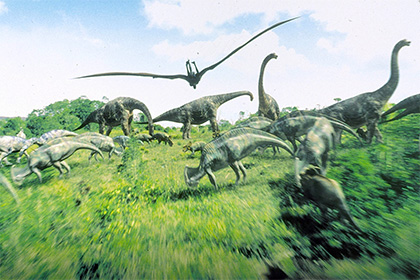 Scientists have found new evidence that mass extinction, clearing the space for the dinosaurs (as a result, they were the main large animals on the planet), occurred due to the fall of a giant asteroid. That is, the cause and prosperity, and death of the dinosaurs became meteorites — in accordance with the words that Taras Bulba said before to kill his son. The study presented in the journal PLoS one, and briefly about it tells Popular Science.

Had already put forward the hypothesis that the Triassic extinction had something to do with the fall of the asteroid on the territory of modern Canada. Celestial body of between 3 and 8 kilometers in diameter, and the crater from him (Manicouagan) — about 100 kilometers. But then it turned out that created the crater the collision occurred too long ago, about 12 million years before the extinction.

The authors of recent research found that Maniwaki the asteroid still played an important role in the crisis of the biosphere. Scientists have discovered that the first phase of the Triassic extinction is inclusive and global in nature and was caused by a meteorite. The subsequent two phases already were more dependent on terrestrial processes (oxygen deficiency in the oceans and volcanic eruptions.

To such conclusion came paleontologists surveyed fossils of marine life on the bottom of the great ocean Panthalassa, once surrounding the Pangaea supermetric. The collapse of marine ecosystems coincided with the fall of the asteroid. Thus, it was correct the idea that the asteroid and the dinosaurs gave the power over the Earth, removing all other groups of large animals, and finally brought them to extinction in the late Cretaceous period, in strict accordance with the verdict that Taras Bulba made his son, noted Popular Science.