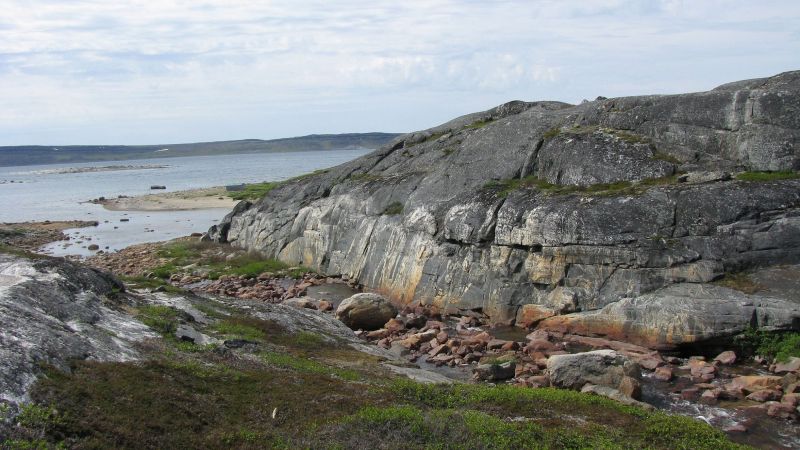 Life on Earth has appeared due to liquid water, and water has played a key role in the formation of rocks, of which tectonic plates are composed. But the question is: was the young Earth a kingdom of volcanoes and sulfur, or was it originally a water-covered sphere?

Four and a half billion years ago clouds of cosmic dust revolving around the star formed into a planet. But unlike most other planets in the stellar system, this was in orbit, which allowed the water on the surface to exist in the form of a liquid, rather than a solid or gaseous substance. This played a key role in making the ancient Earth the cradle of life, but the question is: was the newborn planet a red-hot balloon covered with active volcanoes, or was it always a sphere of water rich in water? Scientists have discovered a new way to look into the past and find out the answer to this question.

A group of researchers studied the stones found in a very old Canadian shield, a vast region of exposed rock in the northwestern part of Quebec. The samples they studied at first glance were not anything special: they were only 2.7 billion years old, and modern science knows stones that are older than these for more than a billion years. Nevertheless, something attracted the attention of researchers: metals, traces of which were found in the breed, contained special markers, implying belonging to a very specific kind of earth crust, which appeared soon after the formation of the planet and more similar to the Martian one than to the earthly habitual one. A new study is published in the journal Science.

Scientists specially conducted an analysis of two “natural clocks”, pairs of isotopes of samarium and neodymium. The first isotope of samarium decays into a neodymium isotope very quickly, and therefore the presence of a so-called isotope. Neodymium-142 gives us information about the early history of the breed. The second isotope of samarium decays into neodymium-143 much more slowly. Thus, the ratio of the isotopes of the first and second pairs gives us exhaustive information about that time interval when the disintegration of one has ended and the decay of the second has begun.

Jonathan O’Neill, an associate professor at the University of Ottawa in Canada, used these markers together with colleagues to determine if these Canadian shield rocks originated from a “felsic” source (a granite rock typical of the earth’s crust on land), or from “Mafic” source (basalt rock, characteristic of the crust of the seabed). It turned out that the find was formed from a mafic source about 4 billion years ago, and later became part of the Canadian shield. This means that a piece of a very ancient oceanic crust lay in the ground for about a billion years before it turned into the earth’s crust. It does not mean. However, that the ancient Earth was covered by the oceans: on other planets, where there are no oceans, there was found a similar bark. According to the geochemist Ming Tang, the question should be put differently: if the formation of land began primarily from the mafic, oceanic crust, why now we have so much continental crust?

At first glance it sounds like some esoteric, but in practice everything is more than prosaic: we do not know what the Earth looked like billions of years ago, because to date there are too few samples of stones that roughly correspond to 4 billion years, Then for sure. A new technique allows you to “read” younger stones in order to get information about the distant past.

So what does the new study tell us? As a rule, people used to think that the young Earth was like “hellish” worlds, like Venus or Mars, which have a mafic bark without tectonic plates – red-hot planets emitting sulphurous miasms. O’Neil’s work confirms this hypothesis and suggests that about 3 billion years ago on the planet could appear granite slabs, which became the basis for tectonic plates. Many scientists, however, disagree with this and believe that tectonic plates were formed much earlier, mainly due to the presence of liquid water. There is still no definitive answer, and therefore scientists hope that future discoveries and improved methods of rock analysis will help to finally put an end to this question.