Scientists have reconstructed the appearance of a mysterious prehistoric creature 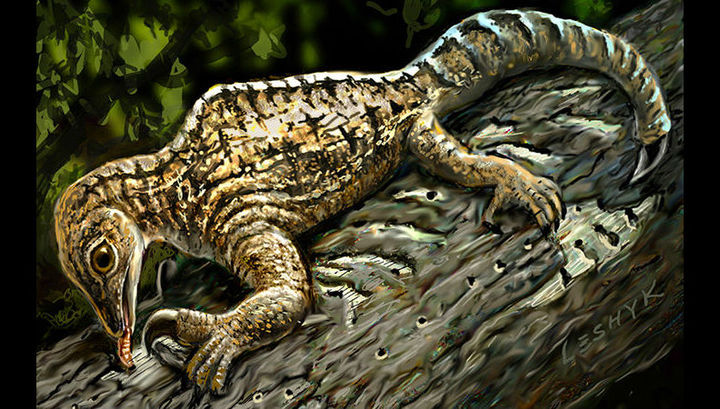 Strange new fossil reptiles demonstrated the dead-end of animal. Paleontologists have reconstructed the appearance of a mysterious prehistoric creature, which is a dead-end branch that evolved in parallel with the dinosaurs. Analysis of the remains of a small reptile, called Drepanosaurus, showed that it had massive claws on the index fingers of the front feet. Probably a dangerous weapon was necessary to the animal for opening the bark on the trees and searching under it insects.

Externally, the reptile that lived on the territory of the United States, approximately 212 million years ago, resembles a hybrid of a chameleon and an anteater. The seeming resemblance to lizards, the animal does not belong to any of the groups of modern reptiles. Line drepanosiphum has a common ancestor with dinosaurs, lizards and crocodiles, and is still known only poorly preserved remains found in the North of Italy over 30 years ago.

The new find was made in the Ghost ranch quarry in the us state of new Mexico, was able to tell about the extinct creatures much more. The animal was the size of a cat and, most likely lived in the trees.

A team of researchers headed by Adam Pritchard from Yale University conducted a 3D reconstruction of the forelimbs of dreamsaver based on the results of computed tomography dozen collected bones, many of which were shattered.

One of the most amazing features of dreamsaver is the structure of its forelimbs. These body parts have a four-legged animal known for its versatility. They are suitable for walking, digging, flying and swimming. The skeleton of the forelimbs almost unchanged for 375 million years of evolutionary development.

From four-legged animals the forearm consists of two elongated parallel extending from the elbow radius and ulna, which in turn connect with a series of shorter bones of the wrist. And dreamsare the ulna is flat and curved in the shape of a Crescent. In addition, connected to the wrist bone is much longer than the others, and in fact exceed the size of even radius. And all this had in order to claw on the end of the index finger was indeed a powerful tool, scientists say.

The joints of the bones suggest that the enlarged claws of drepanosiphum needed to ruin insect nests, ” says Pritchard in a press release from the University. – This hand could easily break them. Potential motility resembles the behavior of the anteaters, who also eat insects.

Detailed description of the reptiles represented in the article, published in Current Biology.

Interestingly, the unique structure of the body to the ancient reptiles was not transferred to any other animal, so it was a so-called dead-end branch of development. Anteaters have similar anatomical feature evolved much later, we can say with zero, and is determined by the environment and food interest.

Work in new Mexico continue, and scientists are full of hope for the discovery of new samples of the wonderful animals that will give rise to fresh evolutionary discoveries.