Scientists have reconstructed the skeleton of a strange dinosaur 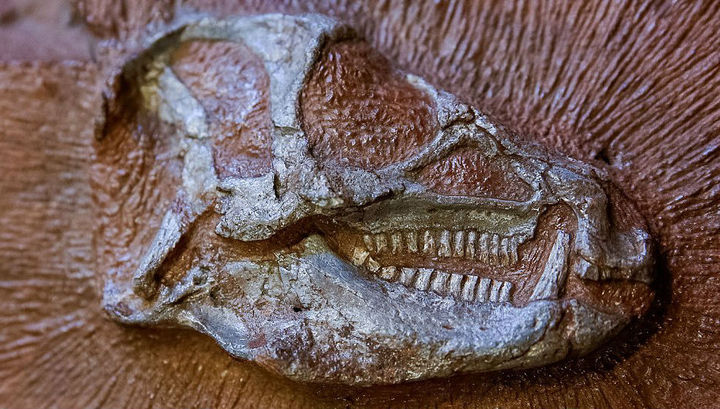 Imprisoned in the stone millions of years ago the remains of some of the dinosaurs are not so easy to reveal their secrets. Recently, however, the world’s largest x-ray machine helped to define exactly looked like the skeleton of one of the earliest and most primitive of the herbivorous dinosaurs – heterodontosaurus (Heterodontosaurus tucki).

Despite the fact that these creatures were widespread in the early Jurassic period, their remains are considered to be a rare find.

However, not long ago, paleontologists found the most complete fossil skeleton of a bizarre dinosaur that roamed the earth about 200 million years ago. This valuable copy was found by scientists of the Eastern Cape province of South Africa.

When studying the bones of Heterodontosaurus tucki was a serious problem – they were literally built into solid rock, and any attempt to draw them out could only hurt. In addition, the places where bones have been found that were trapped in minerals, which makes it impossible to use traditional CT scanners.

To explore the remains of a dinosaur and not to cause them irreparable harm, a team of scientists from the University of the Witwatersrand in conjunction with paleontologists from the European synchrotron radiation facility (ESRF) used high-energy x-rays. This has helped scientists to non-invasively reconstruct the dinosaur skeleton in great detail.

By the way, this was the first case of scanning the complete skeleton of a dinosaur – to this end the researchers checked on the ESRF x-ray fossil bones, teeth or skulls.

Scan Heterodontosaurus tucki showed that it was a miniature herbivorous dinosaur, whose teeth were located in the back of the mouth, and large white fangs in the front.

Scientists believe that the dinosaur used its teeth for grinding vegetable food, but large canines for digging up roots of plants and possibly for protection in battle. For the first time researchers have a full jaw of a dinosaur, so you can test some assumptions.

However, according to paleontologists, they still do not know much about early herbivorous dinosaurs. Need new models and new technologies (like those developed at the ESRF) to fill in the missing gaps.

The researchers also hope to create a reconstruction of the animal’s brain in 3D to check whether there was a dinosaur capable of challenging behaviors.

In addition, now that the scientists have got digital display of the bones of the animal, they can use computer simulation to attach to the skeletal muscles. So you can find out how a dinosaur moved, he always walked on two legs or sometimes used four limbs. The scientists intend to figure it out in subsequent studies.