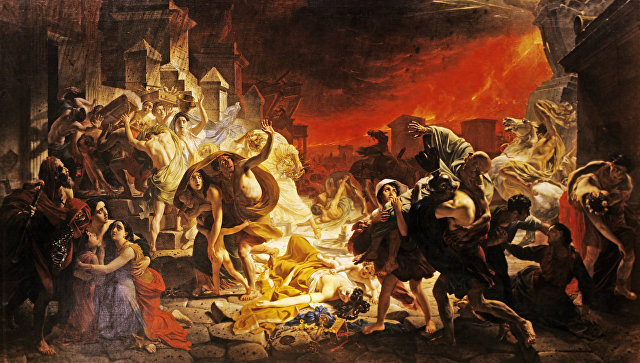 The inhabitants of the legendary Pompeii and Herculaneum could ruin not only the eruption of Vesuvius, but also a huge amount of toxic compounds of antimony in their tap water, chemists state.

“For a long time, colleagues believe that the Romans poisoned themselves using lead pipes in their water pipes.” This thesis is not entirely justified, since lead pipes are quickly “overgrown” with limestone deposits that prevent lead from entering the water. Pipes were only during their laying or during repair, “says Kaare Rasmussen from the University of Southern Denmark in Odense.

Ancient Rome, as it is often criticized by many art historians and historians of science, did not leave behind itself as rich a cultural heritage as Ancient Greece, but the ancient Romans succeeded in two practical disciplines – in law, and in architecture and construction. Ancient Roman roads, aqueducts, the Pantheon and other cathedrals and architectural structures have stood for many thousands of years and are still used today.

Studying the history of the fall of the Roman Empire, many historians and public figures drew attention to the fact that the Romans used too much lead in their lives. Pipes were cast from it, along which water was transported to the houses of citizens of the “eternal city”, wine and sugar were cooked in lead containers, and “alchemists” of that era used it as a component of many medicines.

Lead compounds, as the Romans themselves have noticed, have an extremely negative effect on the brain and other parts of the body, which is why many scientists and thinkers have long believed that the construction of lead aqueducts and the spreading of dishes from this metal was one of the main reasons why the empire So quickly ended its existence.

Rasmussen and his colleagues tried to find out if this was really so, having studied the chemical composition of the deposits and matter of the pipes themselves found in the house of the banker Lucius Cecilia Yukunda, buried under the lava along with the rest of Pompeii during the eruption of Vesuvius in 79 AD.

By dissolving the pieces of the tube in the acid and letting it pass through the mass spectrometer, the scientists noticed something unusual. It contained not only lead and traces of mineral deposits, but also a large amount of antimony, a toxic semimetal.

Antimony, unlike lead, is much more toxic and even small concentrations of this element in water can cause vomiting, bowel incontinence and more serious health effects, such as cirrhosis and destruction of the kidneys.

According to scientists, the pipes contained about 700 times more antimony than is present in the soil of Pompeii or in the rocks in the vicinity of Vesuvius, which indicates that it could pose a huge threat to the health of city residents.

Limestone and other outgrowths on the surface of the pipes, according to Rasmussen and his colleagues, will not interfere with the interaction of water and antimony, so that the water that entered the house of Lucius Yukund and other Pompeians must have been extremely toxic and unfit for drinking.

How could antimony be in the ancient Roman pipes? According to Rasmussen, the ancient builders used this soft and fusible metal as a solder, by which they fastened the pipes in the construction of aqueducts. This, according to the chemist, well explains why the inhabitants of Pompeii complained of health problems, and why lead was not associated with them.