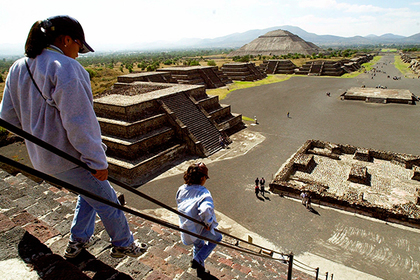 Scanning the ruins of the pyramid of the Moon from the ancient city of Teotihuacan, located 50 kilometers from modern Mexico City, showed that under it really is a tunnel. Underground corridor, believed by archaeologists, probably imitated a journey to the afterlife. This is reported by ABC News.

“The discovery confirms that the inhabitants of Teotihuacan reproduced the same image in their huge churches, its function is to imitate the afterlife,” says the archaeologist of the National Institute of Anthropology and History (Mexico) Veronica Ortega.

The tunnel is located at a depth of about ten meters below the base of the pyramid of the Moon. Archaeologists believe that it was filled up in ancient times.

The flourishing of the city-state of Teotihuacan occurred between 250-600 AD, when it was inhabited by more than 200 thousand people. By the time the Aztecs appeared on this territory, around the 14th century, it was abandoned by local residents. Archaeologists have not yet discovered any remains of the elite Teotihuacan, who ruled before the Aztecs came to the city. The reason for the decline of the ancient state is also unknown.