Scientists want to rewrite the history of the Easter Island civilization 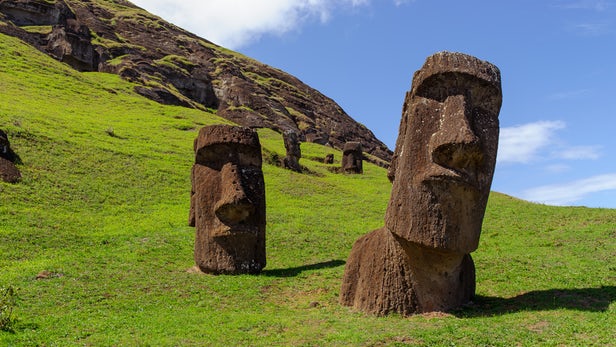 Easter Island is known for two things. First, with its giant stone sculptures. And secondly, with its edifying history of an isolated civilization that has destroyed itself by reckless misuse of natural resources. However, a new analysis of the archaeological finds of this civilization, perhaps, will allow scientists to rewrite the story, drawing people of the Rapa Nui civilization in a more positive light.

When the Europeans first landed on Easter Island in the 18th century, they discovered a rather desolate unsightly landscape. On the island there were no people, but there were huge awesome stone statues and in the form of human heads. Most of the island’s trees have been cut down, most likely for use as heating, as well as for cooking. Exploring this island, scientists came to the conclusion that at one time it was prosperous with an abundance of greenery and various natural resources.

From the trees on the island, canoes were also built for the extraction of fish and other seafood. This helped the islanders live longer, as the soil on the island could eventually become depleted and infertile. The use of ocean gifts was the second chance for the inhabitants of the island.

In order to gain a better understanding of what the people of Easter Island were eating, the team from the University of Binghamton analyzed the remains of people, animals and plants on this island that date back to the 1400th century AD. Analysis of carbon and nitrogen isotopes of collagen in bones can show the diet of ancient people.

The results showed that about half of the proteins consumed by Rapa Nui people had a sea source, that is, they were seafood.

“We found that the islanders not only recklessly used the resources of the Earth, but also enriched the soil with fertilizers to obtain better crops. In addition, we found that seafood was eaten by islanders more actively and much longer than we assumed earlier. Showed that the tribe planted crops.

Based on a new analysis of the excavations, scientists believe that the previously described history of Easter Island should be rewritten in connection with the fact that new details of this civilization are being opened. Scientists are of the opinion that the ancient people were not as carefree and careless as previously thought. They tried to protect available resources, and could be lost as a result of any natural disaster.