Japanese Sogdiologist professors are very interested in the Sogdian rock inscriptions in Talas. This was reported by an archaeologist, Ph.D., Honored Worker of Culture of the Kyrgyz Republic, the head of Center for the Study of the historical heritage, a researcher at the Institute of History and Heritage National Academy of Sciences of the Kyrgyz Republic Bakyt Amanbaeva.

Professor at Kyoto University, Yutaka Yoshida sogdiolog and archaeologist, professor at the University Taiko Kazuya Yamauchi, National Academy of Sciences scientific workers, accompanied by a local expert on historic sites Emile Choroeva visited gorges of the Terek-Sai and Kulan Sai, where the Sogdian rock inscriptions. They are located 4-5 kilometers north of the village of Kok-Oy Talas district.

“Professor Yoshida, a great expert on the Sogdian language, and he had heard of the rock inscriptions in the Terek-Sai-Sai and Kulan. These are the largest inscriptions in Central Asia and for decades have been mistakenly defined as Uighur, “said archaeologist B. Amanbaeva. 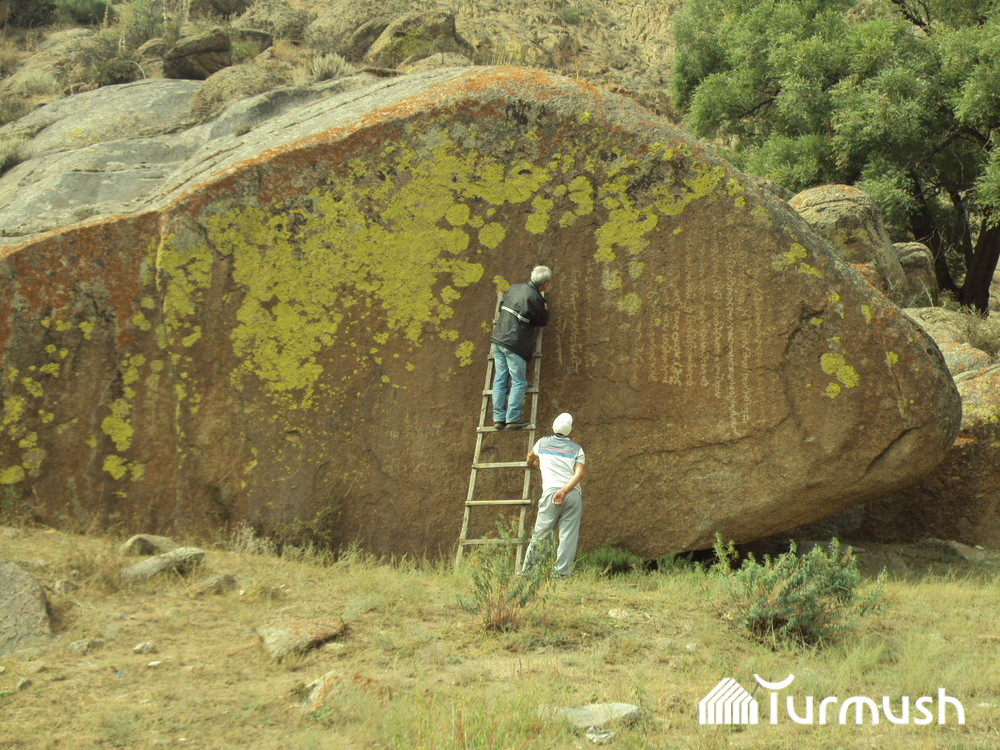 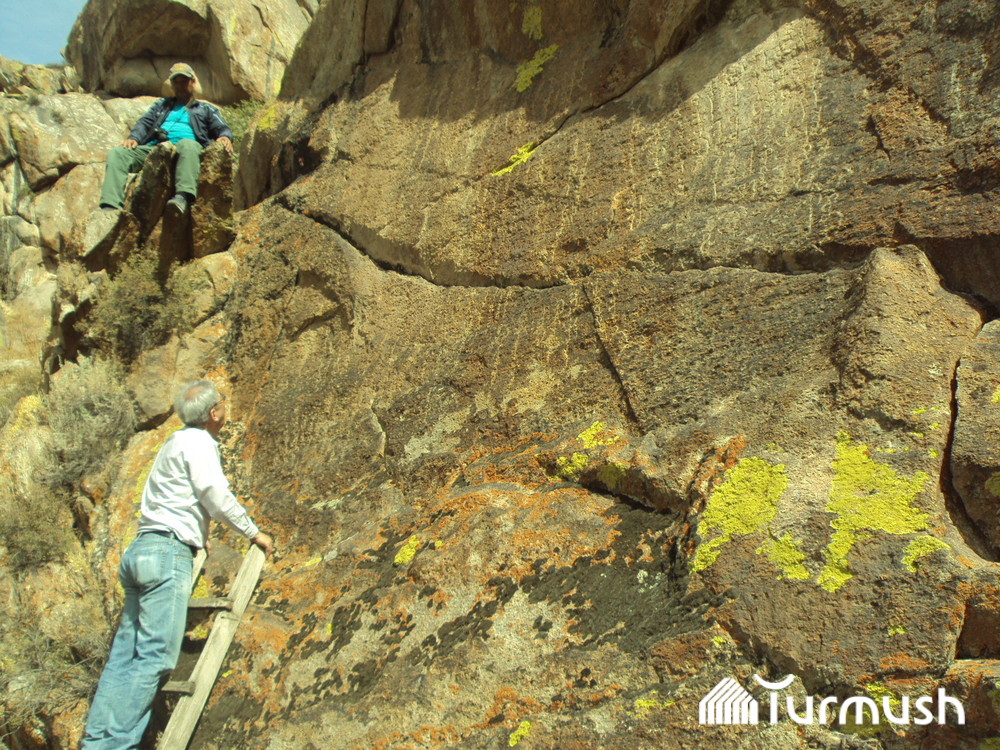 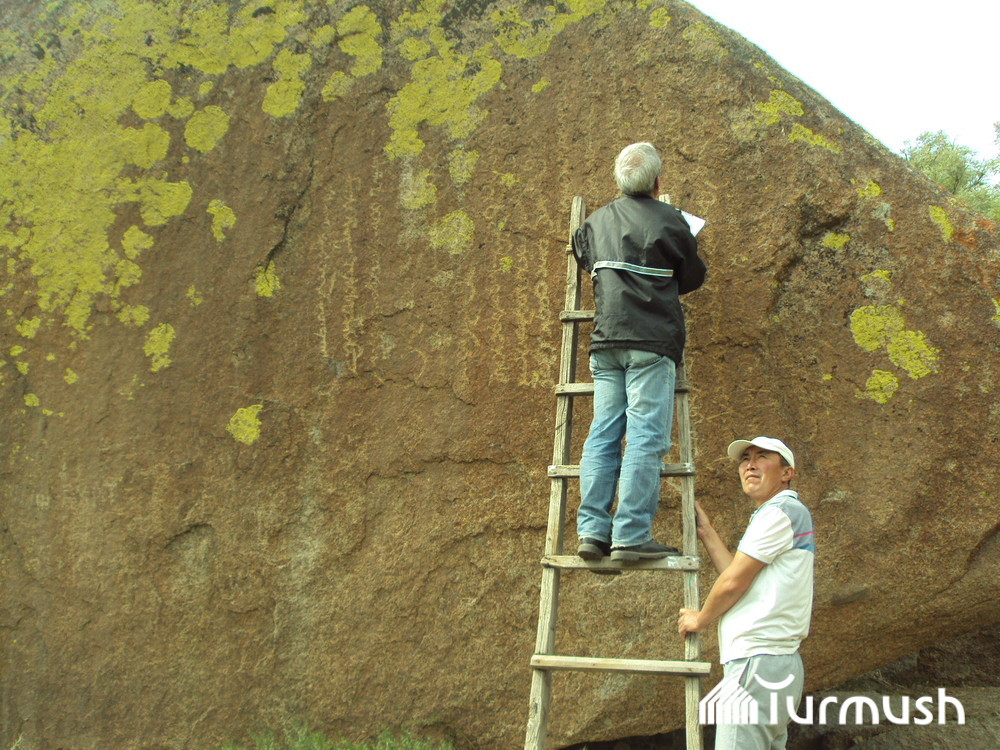 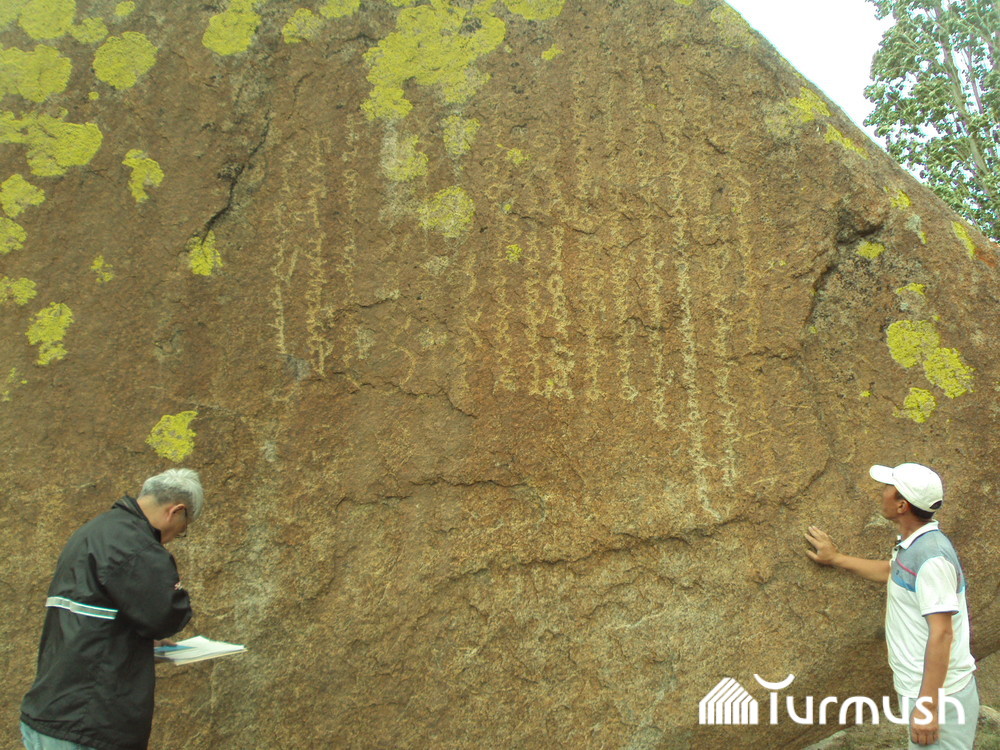 She noted that the Medieval Talas Valley was not a dead-end, isolated. It was one of the centers of the Muslim world.

According B.Amanbaevoy spring 1897 V.A.Kallaur, driving along the right bank of the Talas River, drew the attention of the ruins of the settlement Ak-Dobo. This was the first mention of the ancient city of Tekabekt. V.Kallaur sent his interpreter Sh.Bekchurov to inspect the gorge. He recorded the legend associated with the gorge, made copies of a part of the inscriptions on the stone in Kulan-Say. In September 1897, together with Sh.Bekchurov Fayzyrahmanovym copied part of a large inscription in Terek-Sai and two lines of runic inscriptions. These inscriptions were studied in the Soviet era scientists P.P.Ivanov, SEMalov, M.E.Masson, T.Mirgiyazov, I.A.Batmanov, Ch.Zhumagulov, VVRadlov, D.F.Vinnik , ER Tenishev, VA Livshits and many others. In 1975 an epigraphic group of scientists led by V.Livshits read vertical inscriptions like Sogdian.

On the big rock in Terek-Sai seven Sogdian vertical inscriptions and 3 runic inscriptions were stamped. This is the largest epigraphic complex in the whole territory of Central Asia.

On a stone in Kulan-Say, similar to floating fish, 18 lines of vertical Sogdian inscription are inscribed. These are monuments of late Sogdian writing. They belong to the X and the beginning of the 11th centuries and come from the environment of the Turkic and Sogdian population of the Talas valley.