Secrets of the ancient Puma Punku 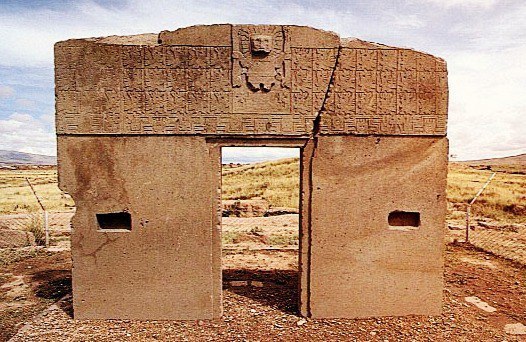 70 kilometers to the west of La Paz, high in the Andes at an altitude of 3600 meters above sea level, are the ruins of Puma-Punku. These megalithic blocks of quaint shape are some of the largest on earth. They reach 8 meters in length and weigh more than 100 tons each. Granite blocks, scattered over a vast area of ​​a desert plateau like cubes for children. It seems that there was a certain catastrophe of unimaginable proportions. Archaeologists still can not understand why and for what the Puma-Punk was, what it looked like, and for what purpose could this grandiose structure serve?

Most archaeologists believe that the Puma-Punco was built about 2000 years ago. There were versions that the age of Puma Punk was more than 17 thousand years! But scientists and archeologists have not yet agreed on the dating of the megalithic structures of the Puma Punk. According to the local legend Puma Punk was built in just one night by the gods. Another of the legends says that the city was built by the race of giants after the flood, which flooded all the territories. Traces of the flood are indeed found in the Andes of South America. These tracks indicate that the flow of a giant tsunami hit the continent from the ocean and destroyed such megalithic complexes as Ollantaytambo.

In the center of Pune-Punku are the “Gates of the Sun”, carved from a solid block of andesite, a solid Andean granite rock. The weight of the Sun’s Gate is more than ten tons! The gates of the Sun were probably the entrance to Pune Punk. In the upper part of the arch of the gate you can find fifty winged creatures, located on both sides of the god-creator. Most stone blocks made with mathematical precision suggest that these blocks were manufactured in an industrial way. They are all identical, similar to the elements of a giant designer, which indicates their production according to a pre-compiled drawing using accurate measuring instruments.

Blocks could be used as fastenings of huge gates of a temple complex. This was proved experimentally. Perhaps, the blocks built in one row, were used as the launch pad for ancient aircraft. the image of which is the famous “Colombian gold airplane”. This version of the wave is combined with the geoglyphs of the plateau “Nazca” and “Palpa.” It is possible that Puma Punk was a prehistoric base of space aliens and perhaps even was a cosmodrome. This is indicated by the technological nature of the stone blocks at this height. From the point of view of official science, the primitive tribes of the Indians were not at all rational to build something like this in a deserted place where there is no water, in the absence of draft animals, with only primitive tools and muscular strength. In addition, it is not known what the population of pre-Columbian America was. The only logical explanation is that the Indians found already in an abandoned state grandiose megalithic structures subsequently become for them a sacred place of the gods’ stay.

According to the official version, the blocks are cut in quarries, which were located a hundred kilometers from this place, and then they were rolled on special wooden scrapers. However, the one who built the Puma Punk, knew what the drawings, logistics and had access to advanced stone processing technologies. This is indicated both by the traces of stone processing itself, and by the weight that does not allow the material to be delivered to such a height in a completely deserted region of the planet with the help of primitive scoops. To move such blogs, it was necessary to have unique technologies. It is quite possible that this could be levitation, antigravitation, the properties of which we are just starting to comprehend. Without a doubt that during the construction of the Puma, Punk was not without mechanisms, with a huge lift.

The most amazing thing about Pumo-Punku is how the construction process itself was going. The bulk of scientists believe that Puma-Punku blocks were hand-grinded using primitive stone tools. However, we are talking about granite blocks, which is one of the hardest materials on Earth. In addition, Puma Punk has traces where natural solid crystalline impregnations are literally cut off along with the rest of the material. This can not be achieved by primitive manual stone processing. This fact, as well as the fact that before us the volcanic rock with the presence of traces of sawing and drilling completely refutes the gaining popularity of the fallacy of the concrete origin of megalithic structures.

Puma-Punku is unique in terms of erection and form. Indeed, the stone blocks of the Puma Punku are similar to some child’s designer of cyclopean sizes. The blocks have a whimsical geometric shape, with complex internal angles, protrusions, notches and drilled holes. The very nature of these features of the stone blocks of the Puma Punku, clearly speaks of their technogenic purpose. It is possible that the megaliths of the Puma Punk were assembled into a single whole, or some equipment that had not survived was inserted into these holes and niches.

Indirect confirmation of the alien version of the origin of the Puma, Punku is in the stones of Tiwanaku, another megalithic complex located near the Puma Punk. In the 1960s, the authorities of Bolivia excavated the underground temple in Tiwanaku. On the walls of the square courtyard were found hundreds of stone heads, with a variety of facial features. They say that they are representatives of different human races that lived on earth: different forms of the skull, eyes and headdresses. Some heads look very unusual and are more like a modern image of aliens, the so-called race of the Grays (gray). Another proof of the ancient paleocontact is the artifacts stored in the museum of precious metals in La Paz. There is an amazing bowl of “Fuente Magna”, discovered next to Tiwanaku and Poona Punk. On the cup there are Sumerian wedge-shaped inscriptions! This indicates the direct connection of the ancient Sumerians and the inhabitants of Tiwanaku.

It is not known exactly what caused the fall of Puma Punk. By the nature of the destruction, it can be judged that a certain force scattered giant blocks like toy cubes. Could this be a (nuclear) explosion, or was it a wave of a super tsunami that struck the continent? However, fragments of diorite, which can be found on a vast plateau territory is a clear sign of an explosion. From this we can conclude that at first a powerful explosion destroyed the ancient complex, then everything that was destroyed was covered by a wave that brought mud and clay and covered the entire megalithic complex. Thus, we can talk about one more place bearing the traces of the battle of the gods and the cataclysm of planetary scale, which are mentioned in the myths of many peoples of the world.