Secrets of the Etruscan civilization 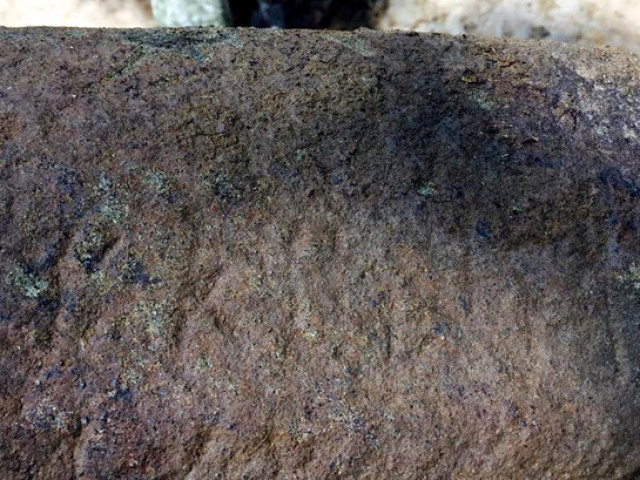 Inscriptions in the Etruscan language are very rare, therefore, every discovery produces a small – or big – sensation in the historical community. Despite the fact that the total number of detected Etruscan inscriptions is approaching 13,000, not all of them “equally useful” for decoding language of a lost civilization. The vast majority of finds – the epitaph that is quite short and monotonous inscriptions: one can learn the name, life time, sometimes occupation, and brief information about the family of the deceased.

Of the nearly 13 thousand Etruscan inscriptions only a few (units, not thousands) you can call text containing any significant for linguists the number of words and information. Largely for this reason, the language of the Etruscans – ancient civilization had a huge impact on its future destroyers, the Romans (and Romans through to the whole of Western culture), is still not amenable to final transcript.

The inscription, discovered during the excavation of the Etruscan settlement of Poggio Colla (Mugello valley in Tuscany, Italy) has already been called a rare find. A stone which has carved into it the letters, archaeologists found in August 2015, but only in March this year announced its opening to the General public.

Slab of Sandstone about the size 120 by 60 centimetres was discovered at the base of an Etruscan temple built on the site of the ancient sanctuary. The attention of archaeologists was attracted by the unusual shape of stone: carefully machined plate with rounded edges does not look like a conventional building material.

On examination, the researchers found on the surface of Sandstone, worn down from the time of the Etruscan letters.

According to archaeologists, they discovered a stone stele from the ancient Etruscan sanctuary, and the inscription on it is related to the cult of the deities worshipped by the Etruscans in the VI century BC (around the time scholars have dated the inscription on the stone).
The surface of the Sandstone is mined, apparently, in one of the local Tuscan quarries – much is wiped off. On one side the stone has acquired a reddish tinge – perhaps a trace of a strong fire.

It is known that the Etruscans inhabited Podia Call from VII to III century BC, as archaeological finds suggests that during this time the city has experienced serious shocks, it was destroyed and rebuilt. In the III century BC, the inhabitants left the town forever.

In March 2016, scientists reported that the inscription on the stele of Poggio Colla read contains about 70 letters and punctuation marks. For comparison, the longest text in Etruscan language is the Liber Linteus (“Linen book”), contains 1200 readable words. Nevertheless, the inscription on the stele of POJA Call is considered to be quite long, and most importantly – it can tell scientists new information.

The study of the stele and the inscription on it will take a few months: researchers will conduct a detailed photogrammetry and three-dimensional scan of the stone in the hope to reveal the full label text.

“Maybe it’s sacred text, in this case, we will be able to learn more about the early system of beliefs of a vanished civilization, whose culture was the basis for many Western traditions. It will be an outstanding achievement,” said archaeologist Gregory warden (Warden Gregory), one of the leaders of the archeological project “Valley of Mugello” (Mugello Valley Archaeological Project).

Stele of Poggio Colla has already caused great interest of specialists in Etruscan civilization. And stone, and the inscription on it is unusual for many reasons, says Jean McIntosh Terfa (Jean MacIntosh Turfa), a specialist in Etruscan culture from the University of Pennsylvania: “the Etruscans rarely have labels of length more than a few words on a durable medium. For them, rather, characterized by the use of fragile materials like linen or wax plates.

A stone stele of Poggio Colla created between 525 and 480 BC, indicates the existence of a long religious cult and monumental dedications to the deity. Reuse of the stele as a building material for the later temple could be a sign of profound changes that have occurred in this Etruscan city.”

It is echoed by Ingrid Edlund-berry, Ingrid (Ingrid Edlund-Berry), Professor of archaeology from the University of Texas at Austin: “Any Etruscan text, especially a long, puts stunning new details to our knowledge about the Etruscan civilization. Poggio Colla was to the North of Etruria, while the majority of inscriptions come from the southern districts. No less interestingly, the stele of the early period of development of the Etruscan settlements were found at the base of the walls of another building that was used repeatedly and for other purposes”.

Archaeologist Gregory warden yet so deep “digs”, it is more focused on the inscription over 20 years of excavation in the valley of Mugello is the first find of this kind. “Once a stone stele was a monumental symbol of power designed to impress the faithful. We hope that the inscription on the stele will help us a little further towards the understanding of the Etruscans and their language. The long inscription in the Etruscan – a rarity, especially as long as ours. We are almost sure that we will be able to learn a few new words that never before had met since this inscription is not sepulchral epitaph,” said warden. 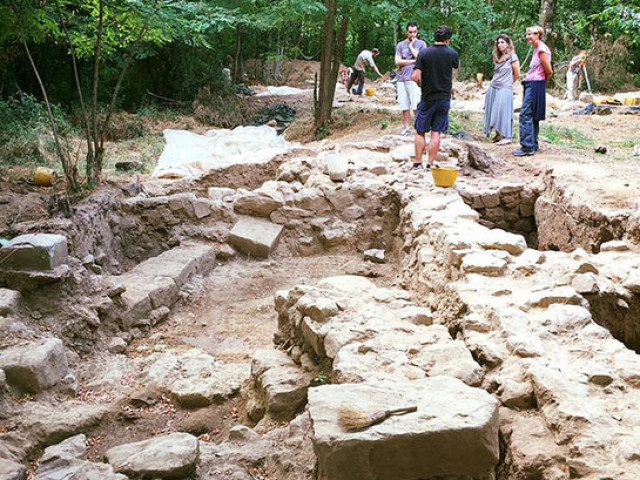 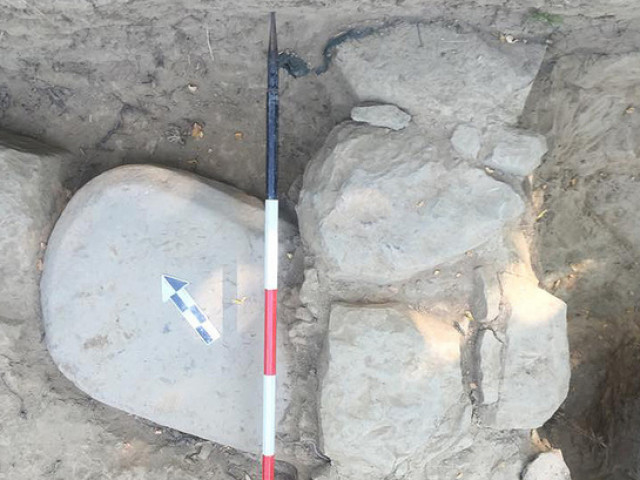 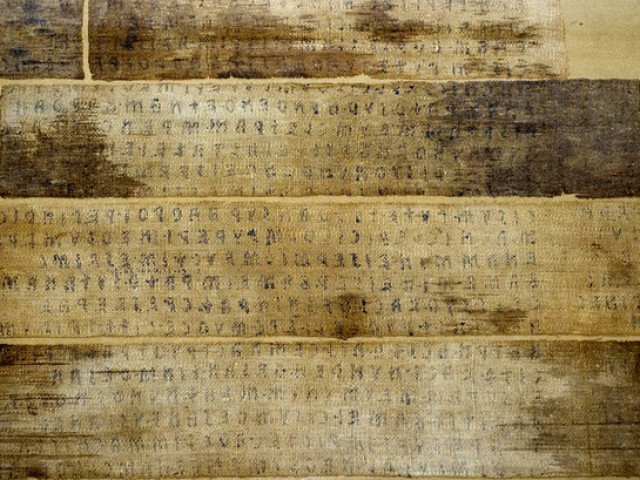 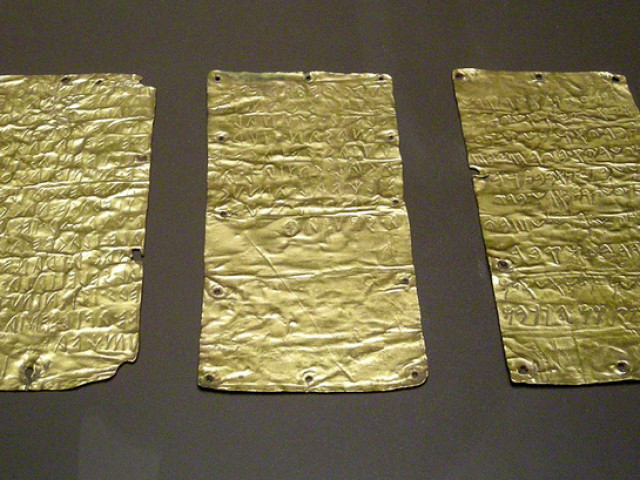 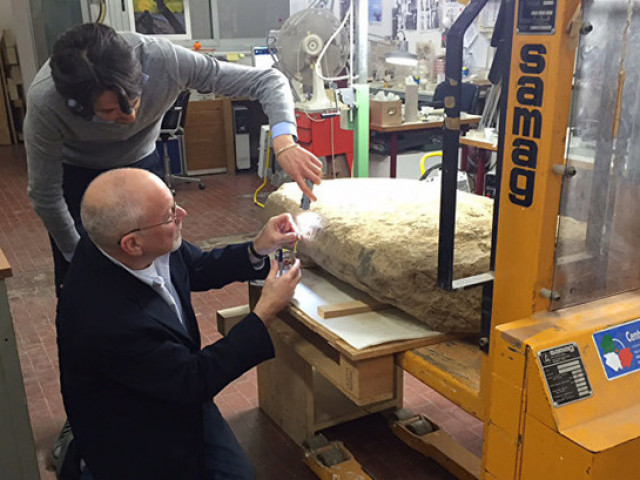 First and foremost, the researchers hope to figure out the name of the Etruscan deity to whom were dedicated to the sanctuary. Such a discovery would be a sensation. Studying labels will do the Rex Wallace (Rex Wallace), Professor at the University of Massachusetts at Amherst and a recognized expert on Etruscan language.

“In addition to the sanctuary in the Etruscan port of Pyrgi, where was discovered the famous Golden tablets with text in two languages, we rarely can confidently determine, in honor of what deities the Etruscans built their shrines and temples.

If inscriptions from Poggio Colla contains the names of the deities, we will receive valuable information about a developed society, all whose members, aristocrats, commoners and even freed slaves – could give the deities their gifts and vows”, explains Jean McIntosh Terfa.

The name of the deity worshipped by the Etruscans at an early stage of development of their civilization, a new word in the label, the new knowledge will allow a step closer to unraveling the main mystery: the origin of the Etruscans and their language. More while no one expects.

Scientists – including many former Soviet and Russian experts for two centuries fighting over this mystery and has achieved great success, but certainty is still far. The legacy of the Etruscans impressed with the quality but not the number of archaeologists have been known for thousands of Etruscan tombs (such as the recent discovery of the Parco di Vulci). All the finds point to extensive trade relations of the Etruscans, about the highest level of art development and engineering skills, but that’s not enough to answer the question about the origin of the mysterious people. Not enough variety of materials and artifacts for comparison, the written sources are virtually absent, the language has not been fully deciphered, in other words, all the “evidence” only circumstantial, and hypotheses remain hypotheses.

Even modern technology is able to detect a hidden room in the tomb of Tutankhamun or to find the modern descendants of “the ice man” ötzi, can not yet give a clear answer to “Etruscan question”.

Geneticists agree that the ancestors of the Etruscans came to the territory of modern Italy from the East, but on the opinions of scholars diverge. The ancestral home of the Etruscans is called Anatolia (modern Turkey), Armenia, Georgia, the North Caucasus… However, many researchers believe that this migration occurred about 5000 years ago, so the Etruscans should be considered as aboriginal people, because the development of their civilization occurred in isolation from ancient roots, and virtually Autonomous.

The study of the origin of language and beliefs of the Etruscans helped to coordinate the existing scientific data, but scientists have once again hit the lack of written sources.

Only two theories have almost universal support: the fact that the Etruscan language is not Indo-European and that the Etruscans borrowed their alphabet from the archaic zapadnodvinskiy alphabet. In practice, this means that you can read almost any Etruscan inscription is easy, but to understand the meaning of reading is difficult. “We know some of the rules of Etruscan grammar, we can determine where the verb, where the noun, we know the meaning and translation of dozens of Etruscan words,” says Greg warden. Perhaps this is an exhaustive summary of current knowledge about the language of an extinct civilization.

All this explains the significance polusmerti inscriptions on a piece of Sandstone and delight of American archaeologists who for 20 years led excavations at Poggio Colla.

Archaeological project “Mugello Valley” exists since 1995, it is funded by Southern Methodist University (SMU) in Dallas and the University of Pennsylvania. One of the leaders of the project, Greg worden, is a Professor at SMU and President of the Swiss University Franklin in Lugano. With this support, for the fate of the inscriptions can not worry – it is examined by all available means and will report on the results.

During the many years of excavation at Poggio Colla was discovered the fortress walls, the necropolis, has repeatedly mentioned the temple, residential buildings, workshops, kilns, pottery, gold jewelry, coins, bronze statues of the VI century BC, domestic and votive objects.

Before the discovery of the unique Etruscan stele with the inscription of the most famous discovery in Poggio Colla was a relief depicting the birth, the oldest in Western European art.

We will add that earlier archaeologists have discovered in Italy underground carved into the rock of the pyramids, also belonging to the culture of the Etruscans, and the remains of two Etruscan aristocrats, for whom the researchers had originally confused.