Secrets of the “Lopez plate” 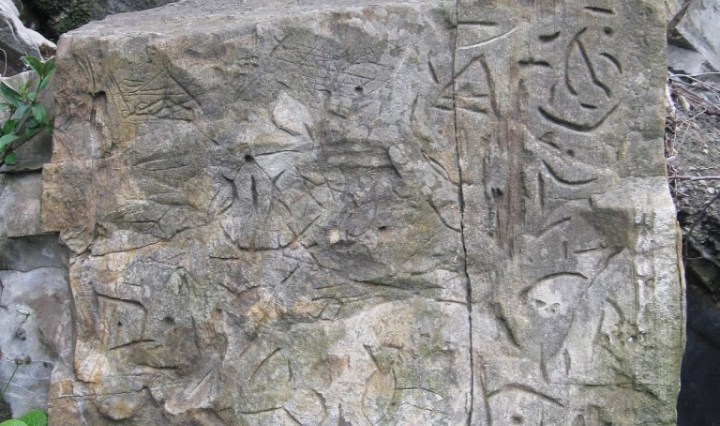 This monument of archeology and paleography was discovered fifteen years ago in a deep ravine north of the village of Loo of the Lazarevsky district of the Krasnodar Territory of Russia. They found the stove, it did not cause scientific interest, was not appreciated, was forgotten, fortunately, not forever.

Secondary opened the Lopez plate (Lopes – the name of the river in the Adygea, at the mouth of which is the village of Loo), a local historian from the village of Big Kichmai Madin Khusht. He reported on the finding to the researchers of the Adyghe Republican Institute of Humanitarian Studies. T.M. Kerasheva A. Kizilov, N. Kondryakov, M. Kudin and invited them to inspect the site of the find.

Plate size 60h50 cm in a rectangular-trapezoid shape, 16-22 cm thick during the loading and transportation was divided into two fragments.

At first glance, two pictograms are seen – a drawing of the facades of dolmens of two types, an earlier one, the so-called. tiled and later, trough. On one exfoliated part the facade is depicted either of a tiled dolmen, or of a stone tomb with a gable roof. On a larger fragment the facade of the trough-shaped dolmen is inscribed. On this basis, we can assume a late dolmenic epoch, close to the turn of the 3rd and 2nd millennia BC.

From the funerary ancient inscriptions Lopez plate with half a hundred petroglyphs is the most informative on the ground part of the funeral rite of the society of developed bronze.

Above the decipherment of its signs is a difficult long-term work. Its results should not only provide ethnographic content, but also reveal the fundamental patterns of the fine arts of the builders of the Caucasian dolmens.